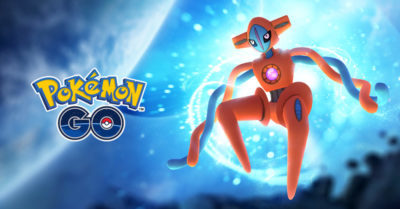 Deoxys is one of the most interesting Pokemon currently in Niantic’s mobile game. Not only is it a mythical creature, like Mew, but it has four forms, each of which has drastically different stats. Here’s everything you need to know about Deoxys Defense Form in Pokemon GO.

How to Get Deoxys Defense Form

The Pokemon is the current EX Raid Boss in Pokemon GO. Following on from Mewtwo and the Attack Form of Deoxys, you need to be invited to an EX Raid, where you’ll get the chance to take on Deoxys Defense Form.

To take part in an EX Raid, you will need to follow these steps:

Then, as is the case with other Raids in the game, you will be given the chance to catch it once you’ve defeated it. Also, since it’s a mythical Pokemon, you will not be able to trade it.

All Attacks It Has in Pokemon GO

The Deoxys Defense Form that you encounter in an EX Raid or catch after could have a couple of different moves. The Fast moves it can know are:

The charged move it can know in Pokemon GO are:

Its max CP in Pokemon GO is 2274, with it being boosted to that when in windy weather conditions, which boost psychic Pokemon.

Deoxys Defense Form is strong against Fighting, Psychic and Poison Type Pokemon, and is weak against Bug, Dark, and Ghost Types.

When you’re facing it in an EX Raid, you should opt to use Pokemon like Gengar (probably the best option with Shadow Ball/Claw or Lick), Mewtwo, Tyranitar, and Weavile. Even though it has great defense stats, which will see it take longer to defeat, be sure to take advantage of its weaknesses.

That’s everything you need to know about Deoxys Defense Form in Pokemon GO. For more tips and tricks on the game, be sure to search for Twinfinite or check out our Pokemon GO wiki.

Also, if you would like to read up on Deoxys Attack Form in Pokemon GO, you can read our other guide on that right here.