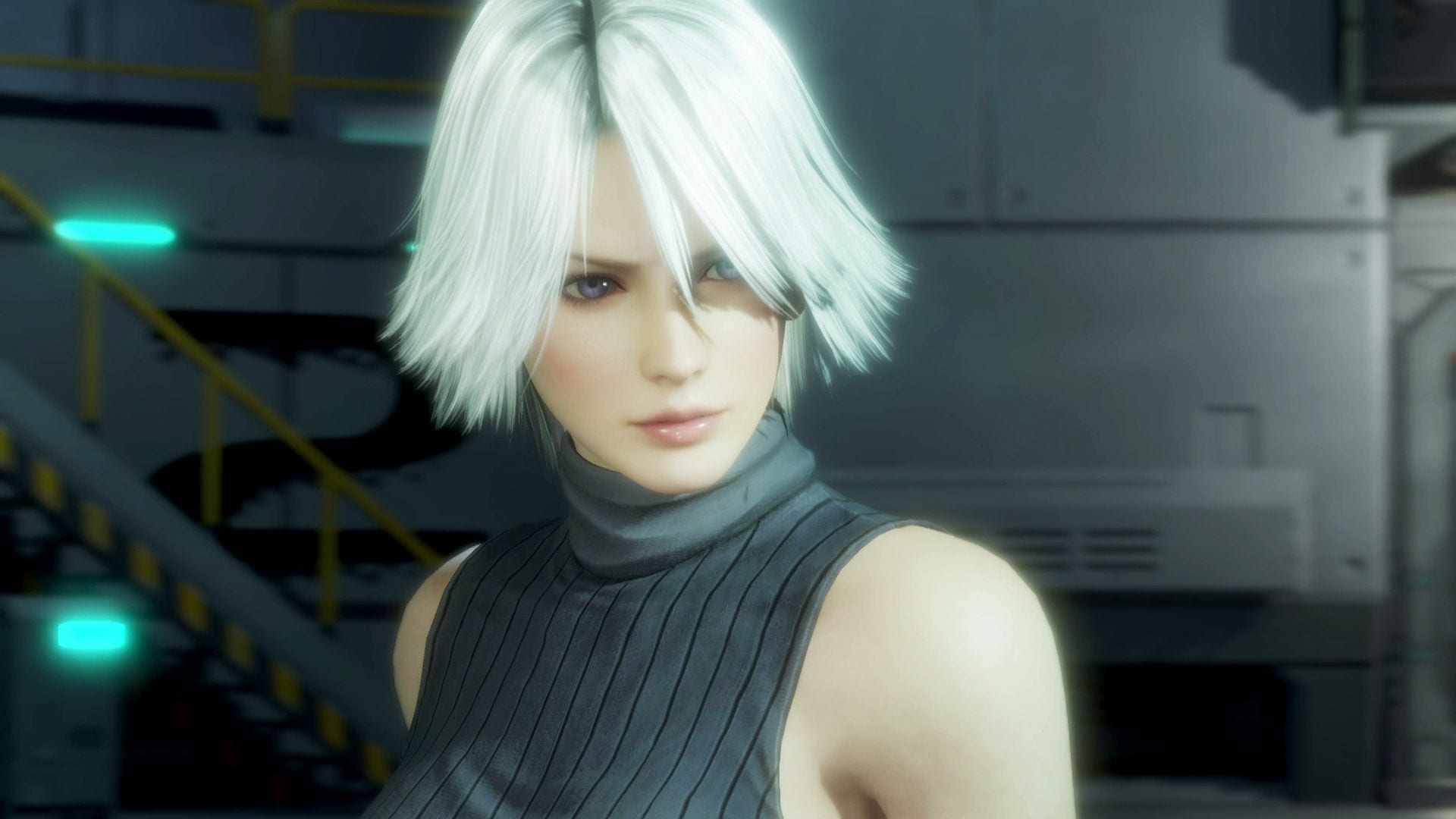 The Dead or Alive series is often seen as popular exclusively due to its alluring imagery and the generous showcase of skin and bouncing flesh. Yet, it has pretty much always been a very competent fighting franchise.

Dead or Alive 6 comes following a rather strange and somewhat confusing sequence of reveals which appeared to try appeal to opposite audiences and ideas at the same time. It had basically jumped back and forth between a radical change towards a more serious and chaste approach to the genre and to the esports scene, and the traditional whimsical nature of the series coexisting with solid fighting mechanics.

Due to this wishy-washy approach to communicating what the game aimed to become, it’s not surprising that even today many wonder what Dead or Alive 6 really is like.

So let me address the elephant in the room right away: Dead or Alive 6 is pretty much still Dead or Alive. Despite the esport ambitions and fuzzy communication, the game’s nature and essence haven’t changed at all.

If you’re looking for a fighting game that doesn’t heavily lean into fanservice, you’re probably in the wrong place, but if you’re on the market for really good fighting gameplay paired with a lot of eye candy, DOA6 has both in spades.

The story of the game sees most of the usual gang plus new characters Diego and NiCO fight over the trophy of the Dead or Alive tournament while DOATEC and M.I.S.T. struggle for supremacy behind the scenes. While the scenario won’t win any writing awards, it’s suitably epic albeit a bit predictable.

Its strongest points are the structure that allows the player to explore different points of view, the rich and likable cast, and the many high-quality cutscenes which make the story campaign really pretty to watch.

While the matches of the story mode tend to be very quick, with a single round each, they’re a very good chance for players to familiarize themselves with basically every character in the game. It’s the perfect first and quick taste that can help fledgling fighters choose a few potential mains to focus their efforts on.

Voice acting is offered in both English and Japanese. Unfortunately, the English track is generally mediocre, while the Japanese voices are, as usual, really good. Luckily we’re provided with both, so this is pretty much a non-issue.

Speaking of audio, the soundtrack is very enjoyable, with tracks that range widely from epic to jazzy, well-underlining moments of action, drama, and even simple menu navigation. It’s also highly customizable, letting you swap tracks for most of the game’s characters and situations.

For a series as visually glitzy as Dead or Alive, graphics are certainly very relevant. The new engine optimized for the game does a fantastic job where it counts the most, which is rendering the characters.

3D models are displayed and animated beautifully, with fantastic attention to detail, especially in their facial expressions. Feelings like rage, fear, concern, pain, smugness, or surprise are clearly visible and recognizable not only during cinematic cutscenes and attacks but also during normal gameplay. This is really quite rare in fighting games, at least to this extent and with such impressive results.

Another highlight is the cloth simulation: while there is still some (probably inevitable) limited clipping, many costumes feature extensive cloth areas which greatly enhance the dynamic feel of each fight, contributing greatly to the overall look of the game.

There is no doubt that Dead or Alive 6 takes its righteous seat among the prettiest fighting games within the whole industry, and it could arguably be defined as the most visually appealing overall.

Speaking of costumes, Team Ninja included a large variety of outfits for the female cast, ranging from elegant to cute, all the way to openly sexy, leaning unapologetically into fanservice. On top of that, the engine calibrates body physics (which can be turned on and off in the options) based on the design and material of each costume.

This means that if you enjoy having all kinds of bouncing all over the screen, you can pick the costumes that will satisfy that kind of taste as much if not better than in previous games of the series at launch. If you prefer something you can show to your parents, there are outfits that will constrict most movement and will prove definitely less distracting.

Unfortunately, the variety of costumes for male characters is radically weaker. Unless you got the Deluxe Edition, all the boys are limited to two outfits with three color variations each. While there is a degree of fanservice for them as well, it’s pretty disappointing to see such a radical unbalance in outfit variety between genders.

While I understand that the girls are likely much more popular, the dudes have their fans as well, and they would certainly deserve some more love. That being said, this isn’t exactly new for the series, so I don’t think anyone will be particularly surprised.

Another puzzling element is the costume break feature. It’s extremely limited, to the point where it looks a bit awkward. When I interviewed director Yohei Shimbori, he explained that this was done on purpose to avoid issues with retailers opting not to carry the game, hinting that things could be enhanced after release.

That being said, at this point I would have simply left out the feature altogether, and implemented it fully post-launch. As it is now, it serves really no purpose, and it isn’t even really satisfying in terms of either fanservice or fighting spectacle.

Beautiful graphics aside, Dead or Alive 6 is a fighting game which will live or die on its gameplay.

If you’re a veteran of the series, most elements will feel fairly familiar, even if there are a few relevant additions. Likely in order to help newcomers, Team Ninja implemented the Fatal Rush, which is an easy and very flashy combo of four strikes with a stun that can be executed simply with the right bumper of the controller. If you have meter, you can typically end it with a powerful Break Blow.

Of course, this has sparked concerns about the game possibly becoming a one-button spammer, but this really isn’t the case. The Fatal Rush itself isn’t very damaging and it’s easily predictable. It can also be easily countered with a Break Hold. The full combo appears to simply be designed to help novices feel powerful at the very beginning in single-player. While parts of it can be useful tools even for more advanced players, it’s most definitely no replacement for more advanced moves.

Despite the presence of the fatal rush, Dead or Alive 6 retains the series’ approach as one of the most technical and nuanced fighting games on the market. The only real difference is that it adds a bit of “easy to learn” before the “hard to master” part.

The quality of the fighting gameplay is most definitely top-notch, with every character offering players a myriad of tools that can be used to outperform and outwit the opponent. The “strikes beat throws, throws beat holds, holds beat strikes” triangle works very well, creating fast and fluid battles that are truly entertaining not only to play but also to watch.

Speaking of holds, they’re the true distinctive flavor of the game. If you’re not familiar with them, they’re basically advanced counters that let quick and smart players turn the power of an opponent’s attack against them.

You need to execute different holds depending on whether you’re targeted by a high attack, a low one, a mid punch, or a mid kick, which makes mastering the system extremely difficult. Yet, when you begin to pull them off consistently, especially in multiplayer, they’re one of the most satisfying mechanics in the genre.

Novices can make life a bit easier for themselves with an option that simplifies holds and reduces them to three (bunching mid kicks and punches together), but if you want to truly learn the game, it’s probably better to just jump into the shark tank and do it the hard way.

Of course, local and online multiplayer are both included. Unfortunately, online gameplay is limited to ranked matches at launch, but Team Ninja promised that a comprehensive lobby system is coming with an update this month. That being said, it’s a bummer that it isn’t available at launch. Dead or Alive 6’s gameplay is so advanced that ranked battles can be really, really scary for newbies. If you get into multiplayer unprepared, expect to learn many hard lessons. Patience is a must.

This is not to say that Dead or Alive 6 isn’t friendly to newcomers and to fighting game novices. As a matter of fact, the development team has made great strides in accessibility in areas that don’t influence the game’s advanced gameplay. For instance, tutorials are contextual, allowing you to often access the information you need directly from whatever you’re doing.

On top of that, and likely more importantly, the game includes the DOA Quest, which isn’t just an engaging and extensive single-player mode in its own right, but also a stealthy mega-tutorial that can be defined a massive gameplay application of the classic carrot and stick combo.

DOA Quest includes over a hundred challenges, each of which is to be played with a predefined character, with three set objectives to achieve. You might be asked to execute a certain number of successful holds, perform a specific attack, tackle your opponent with combo throws, and many more options.

Each successful task gives you a star, which will, in turn, provide you with rewards in terms of coins and unlockables.  Earning all three stars in a quest will give you “costume patterns.” Each unlockable costume has a certain number of patterns that can be unlocked with a specific quest, and once you’ve got them all, you can use coins to get the outfit.

Since this is the most effective way to unlock costumes, it basically encourages players to learn the game using one of Dead or Alive’s most popular aspects as a giant carrot dangled in front of their nose.

This is a very effective way of teaching both the basics and more advanced techniques, not only for one’s chosen characters but for the whole cast. Knowing the enemy’s moves is very, very important in DOA, where predicting what your opponent will do is half the battle.

On top of that, it’s also very enjoyable, up to a point. The one weak point of DOA Quest is that it can become grindy if you obsess with unlocking all costumes in one sitting. This is compounded by the fact that the game does absolutely nothing to tell you which quests you need to tackle in order to earn a specific costume. You have to go blind, which isn’t ideal.

While the mode is fun and very useful for learning, the lack of direction to unlock specific costumes makes it a bit less enjoyable than it could be, which is a pity, even if likely easily fixable.

Ultimately, the game goes much beyond the alluring eye candy that may appear to be its biggest selling point to a casual observer. While it doesn’t neglect the fanservice, it’s a rock solid fighting game with complex and nuanced mechanics that will likely satisfy even the most demanding genre enthusiasts.

Dead or Alive 6 is more accessible than ever, but it’s still most definitely and unapologetically Dead or Alive, and that’s exactly what it should be.