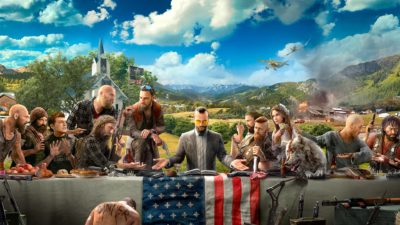 Should You Play as Male or Female in Far Cry 5?

Far Cry 5 released last year, but with the sequel, Far Cry New Dawn, right around the corner, maybe you’re jumping back into Hope County once more or for the first time ever. Here’s everything you you know about whether you should play as male or female in Far Cry 5.

For the first time ever in a Far Cry game, Far Cry 5 not only allowed you to fully customize your character from head to toe, with pants, shirts, glasses, hats and more, but it also allowed you to determine the gender of the character you play as.

There are many games that allow you to determine your gender. Sometimes it matters and sometimes it doesn’t. What camp does Far Cry 5 fall into, though?

Far Cry 5 is a first-person shooter and because of that, it’s very rare that you’ll even see your character. All of the combat and all of the cutscenes happen from a first-person perspective so there are very few times you’ll see all of the customization you’ve bestowed upon your avatar.

In fact, one of the only times you’ll see your character will be in the most frustrating moments of Far Cry 5: when you die.

When you die in Far Cry 5, your character will likely flail about like a rag doll and as the camera pulls up to show you this, you’ll get a full view of your character’s lifeless body in action. Beyond that, though, you won’t see much more than the forearms of your character as they lead to the hands on a weapon.

Other than the view you get of your rag doll body when you die, choosing male or female at the start of Far Cry 5 has no effect on your overarching journey through Hope County. So, if you had to make a decision, choose whichever gender you prefer.

That’s everything you you know about whether you should play as male or female in Far Cry 5. For more tips and tricks on the game, be sure to search for Twinfinite.

Question: Should you play as a male or female in Far Cry 5?

Answer: It doesn’t actually matter. It has no affect on the gameplay. You should just choose whichever one you identify with most or feel like playing as.