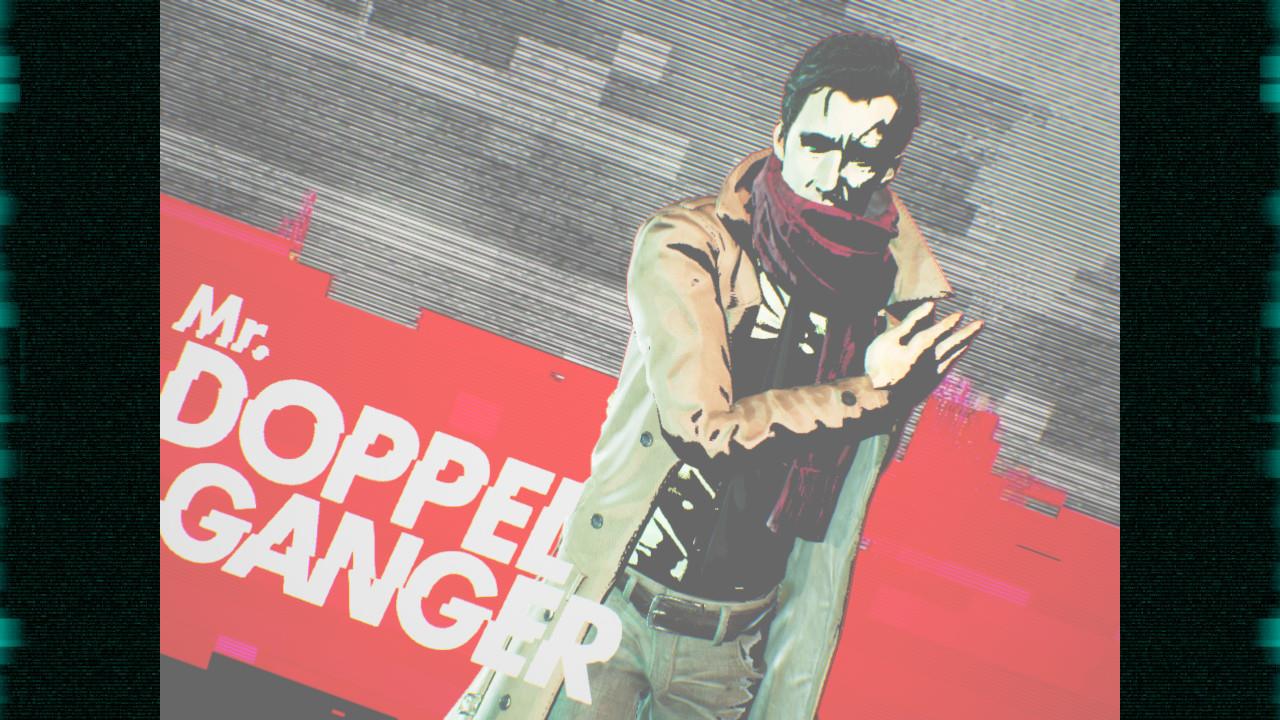 How to Beat Mr Doppelganger in Travis Strikes Again

Phase one of your fight against Mr Doppelganger is fairly simple. He’ll focus on trying to close the distance between you, striking you with his knives and throwing knives at you as a ranged attack. Use your dodge to avoid his attacks, and then use your skills where possible to deal a ton of damage.

If you’ve got the Heavy Chip to slow enemies down, drop this and sneak behind him. Use heavy attacks to deal big damage and if you’re able to, use your charge attack to really whittle his health bar down. Keep doing this until you trigger phase two of the Mr Doppelganger fight in Travis Strikes Again. This is where things begin to get a bit harder.

In phase two, Mr Doppelganger will… well, he’ll bring up a load of doppelgangers. You have nine seconds to attack the right one. Hit the wrong one and you’ll take damage. In our experience, the correct Mr Doppelganger was the one who was in a wildly different pose to the others. For us, he was kneeling down low.

We’ve included a screenshot below to help you identify which Mr Doppelganger you want to attack in phase two.

You want to attack the Mr Doppelganger just in front of us to the left. The one kneeling down.

Once you’ve figured out the correct Mr Doppelganger in phase two, he’ll begin throwing cards which fly at you. One of these will stop and act almost like a turret, firing shots at you for a while. He’ll also start dashing around with his sword a lot more, trying to overwhelm you while the card is firing shots at you.

Don’t panic and just use your dodge and jump to avoid the shots. Jump attacks (B and then X or Y) are particularly useful for evading his attacks and still dealing damage. Use this when possible, and the Heavy chip combined with other skills or your charge attack to deal heavy damage when the time is right.

Mr Doppelganger’s phase three is pretty much the same as phase two. It’ll begin with more doppelgangers appearing, but after you attack the right one, three doppelgangers will be attacking you. You can only deal damage to one of them, so figure that out and then focus your attacks solely on him.

It’s very much a case of keeping yourself out of harm’s way, and keeping track of the correct Mr Doppelganger here. As long as you can do this, take your time dealing damage to Mr Doppelganger and the boss fight is fairly straightforward.

Don’t be tempted into just spamming your way to victory, otherwise, you can get swarmed and your health will be drained faster than you know.

Question: How to beat Mr Doppelganger in Travis Strikes Again?

Answer: The main, tricky part of this boss fight comes in phases two and three, where you must identify the correct Mr Doppelganger. Always look for the one kneeling down when they’re all frozen in poses.

This is the correct one to attack, and means you won’t take damage from attacking the incorrect one. Use skill moves and charge attacks to deal massive damage, and your dodge and jump to evade his knife attacks and card projectiles.