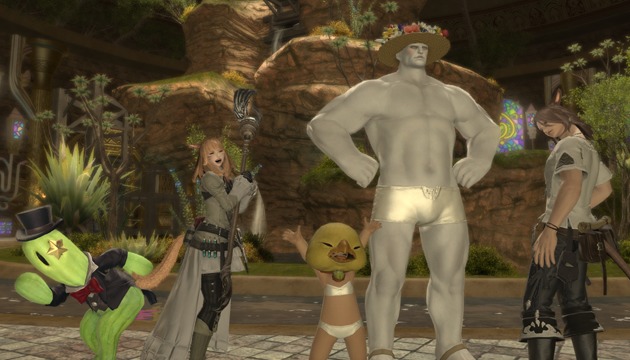 The running gag in Final Fantasy XIV for years now is that glamour is the true endgame. Relevant raids and other content cycle in and out of favor, but one thing has remained steady since the A Realm Reborn days: glamour reigns supreme.

There are now years’ worth of armor sets piled up from dungeons, raids, side events, crafting and more. But how many of those armor sets are truly memorable for anything other than their looks?

Because Final Fantasy XIV has a rapid vertical gear progression where most gear is only relevant (stat-wise) for one update’s worth of content, maybe two at the most, you’re constantly cycling in and out of new equipment.

Nothing has any time to be considered iconic. It’s all in the eye of the beholder. In Final Fantasy XI on the other hand, there is gear that was released during the Rise of the Zilart expansion (2003) that is still relevant in 2019.

Final Fantasy XI is not Final Fantasy XIV, I promise I won’t make any further comparison between the two because it’s been done to death, but there has to be a healthy middle ground that the FFXIV dev team can find between these two games.

With the exception (I guess) of Relic weapons, gear in Final Fantasy XIV has been so dull and lifeless when it comes to stats.

There is almost no agency needed from the player. You wear the highest ilvl gear you can find. Sometimes materia slots make choices slightly complicated (Eureka gear is an example of this) but that’s it. You go with the gear that has the highest numbers.

If the gear in Final Fantasy XIV wasn’t so gorgeous, there would be very little reason to run most outdated content other than collecting tomestone/EXP bonuses that are dangled out to veteran players to ensure that new players can still catch up on older stuff.

It’s great that Final Fantasy XIV is a pretty game with awesome looking gear sets that people want to collect so they can make a really unique, funny, badass, or pretty looking hero.

It would be nice though if more gear could stand out for what’s on the inside and not on the outside.

Sitting around town in extremely powerful, nearly unobtainable gear because only the best of the best could challenge the content needed to get it is such a fun part of many MMORPGs. I used to be super jealous of characters in gear like that in other games.

In Final Fantasy XIV, you admire the work that players put into creating a cool glamour set, and the pretty pictures they take using gpose; but most of the time it’s people just picking armor that looks cool (or silly), and you gloss over all the randoms you play with.

When we asked Final Fantasy XIV director/producer Naoki Yoshida about having more complex gear choices in an interview leading up to Stormblood’s release, at the time he didn’t seem receptive to it.

If anything, he wanted to make gear choice even easier than it was, and with the exception to the Pyros Eureka Relic weapons, he’s held true to that. The glamour endgame when it comes to gear choice hasn’t changed.

Ultimately what makes Final Fantasy XIV special is its story, and the consistent quality and quantity of content updates that the game receives following an expansion.

Even if the developers play it a bit too safe at times (although this aspect has definitely improved a bit as of Stormblood’s lifespan), it’s great that players can count on the quality and balance of Final Fantasy XIV never going completely out of whack.

However, since Stormblood saw the development team start to poke their head out of their shell a bit more when it comes to content (Eureka, Blue Mage, HoH, etc.), it would be great if Shadowbringers did the same for gear.

I’d even settle for baby steps. The thought of Final Fantasy XIV adding Diablo 3-style sets that completely break the game is super unlikely, as awesome as it would be.

It could be something as simple as something like this: add a new ilvl-free equipment slot called an aura. They are job/role-specific and they augment something about your abilities or play style. Maybe give them a cool glow to help make your character stand out.

With how they introduced Blue Mage, the development team has shown that they are adverse to adding content that could lead to players getting excluded from events.

So my idea (or anyone else’s) would need to be something that is slight, and not game-changing, if there’s any hope of something like that being added to the game.

But at this point, I’ll take literally anything that’s more interesting than just using the recommended gear option to auto-equip myself with little thought, and then instantly slapping glamour on top of it.

Gposing and glamour doesn’t need to change at all, it just shouldn’t be used as an excuse to hold back interesting changes to equipment in regards to combat.