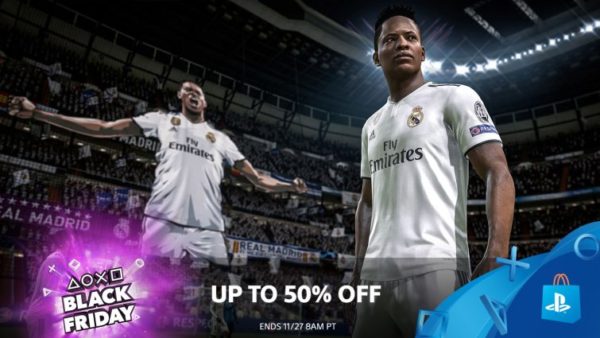 With Black Friday and the holiday shopping season nearly upon us, PlayStation has announced their own Black Friday sales event. The collective discounts will last until November 27th, so there is about a week from this article’s publication to take advantage of the lowered prices on the PSN store.

Here are some of the highlights of PlayStations Black Friday sale that we think might be worth your while.

While Assassin Creed Odyssey’s other editions are also on sale for the PlayStation Black Friday sale, we felt that this specific edition offered the most bang for everyone’s buck.

The base game is going for $40.19 currently which is also a great deal, but if you are interested at all in the future of the title in the form of DLCs and expansions, the Gold Edition of Odyssey is the version to purchase.

Getting the season pass and the main game for nearly the price of a standard base edition makes this a great time to jump into Assassin’s Creed Odyssey with both feet.

The Gold Edition normally retails for $99.99.

Last year’s Assassin’s Creed title’s de facto deluxe edition is down from the staggering $99.99 price tag to a more manageable $39.99. This is $20 dollars less than the standard edition at full price, and also includes the season pass for the game.

We’d suggest this is a great time to purchase Assassin’s Creed Origins if you have been on the fence or waiting for a discounted opportunity.

Players looking for a cheap thrill should look no further, this remastered packaging of Batman: Arkham Asylum and Batman: Arkham City provides hours of entertainment at one of the cheapest prices of the entire Black Friday sale.

Considering Batman: Return to Arkham offers two games, you get both games for $2.50 a piece. If you just finished this year’s Marvel’s Spider-Man for PS4 and are looking for more superhero action, this deal may be worth a look.

The Crash trilogy is a remastered bundling of three of PlayStation’s most iconic exclusive titles. Crash Bandicoot N.Sane Trilogy costs $39.99 on a regular day, but during this sale, you can get the trilogy at 50% that price.

Couple that with the fact that you’re basically getting three titles for $19.99, and this ends up being one the most exciting discounts of the entire sale.

The complete Diablo III experience is marked down from $59.99 to a much more manageable $19.99. This collection includes all previously released Diablo III content, which includes Reaper of Souls and Rise of the Necromancer DLC packs, as well as the base game of course.

This collection offers a lot of value, especially at this heavily marked down price point, which is why we think its worth your time and hard earned cash.

Down from $64.99, this bundle includes two more recent Arkane Studios titles, DisHonored 2 and Prey. Both offer unique gameplay and compelling stories and with this bundle offering players both titles for essentially $13 each, its one of the highest value discounts that PlayStation is offering this Black Friday.

The popular fighting game based on the Dragon Ball source material is down from its full price of $59.99. While this does not account for any of the DLC that Dragon Ball FighterZ has received since launch, it does offer a substantial price slash on the main experience which may be enough for some people.

If Fallout 76 isn’t your cup of tea and you missed 2015’s Fallout 4, it may be more of what you are looking for. The game is in many ways, a standard single player Bethesda RPG epic, but makes some notable changes to the formula, such as the robust crafting system and a fully voiced protagonist.

Also, the game does, in fact, have NPCs which may be a deciding factor if you were turned off by their absence in 76. This bundle includes all the Fallout 4 DLC packs and typically costs $59.99, but is over 50% off for this limited time.

With a slew of planned DLCs being scrapped for the most recent Final Fantasy, if you have been holding out on the title and waiting for the finished, all-encompassing product, this is pretty close.

Other than one more DLC on the way in the form of Episode Ardyn, this edition of Final Fantasy XV includes all the latest patches and updates, as well as each DLC expansion for the title released thus far. This makes it a great time to jump back into Square Enix’s sprawling open world.

One of this year’s most acclaimed titles is available for a steal during this year’s Black Friday sale. Down from its $39.99 price tag, if you have yet to try this hallmark title of 2018 and have been wanting to see what all the fuss is about, this sale may give you ample reason to.

God of War follows Kratos and his son Atreus’s journey in a new realm, which means there’s a new pantheon of gods for Kratos to contend with throughout this awesome saga.

One of the largest price cuts come in the form of Injustice 2’s Legendary Edition. The DC comics 2D fighter is down from a $59.99 asking price.

The Legendary Edition includes the season pass for the title, so with this sale, you’re getting the base game and all the DLC for a $17.99 purchase. This is definitely a standout of the overall Black Friday sale.

One of 2017’s best JRPGs is discounted from its $49.99 starting price. If this year’s JRPGs haven’t been doing it for you, and you missed out on the adventure last year with The Phantom Thieves, then this hefty price cut can make a good excuse to jump into Atlus’s latest Persona title.

Persona 5 tells its own contained story, so there is no need to play the previous four games, or the parent series, Shin Megami Tensei, before diving straight in.

Down from a full priced $59.99 price tag, the latest entry in the South Park RPG series is a fun, comedic and light-hearted adventure that has some surprisingly deep gameplay hidden behind its vulgar innuendos and cartoonish graphics.

While The Last of Us has been out for a while on PS4 and was initially released on PS3, this extremely low sale price made it worth a mention. Players who have yet to venture into the apocalypse with Joel and Ellie might appreciate this low barrier of entry.

Do not make the mistake of correlating price with overall quality, The Last of Us is one of the most critically acclaimed titles from famed developer Naughty Dog. The game is marked down from its $19.99 starting price.

This Wolfenstein II bundle comes with the base game as well as the season pass, offering a large amount of content. Normally this bundle can set players back $59.99 but currently, it is discounted to one third of that initial price.

If you have been waiting for a cheap collection of Wolfenstein II content, this is as a good a time as any to take advantage of the Black Friday sale price.

Did we leave a game on sale that is worth mentioning out? Let us known in the comments and check out the full list of games on sale for Black Friday here.