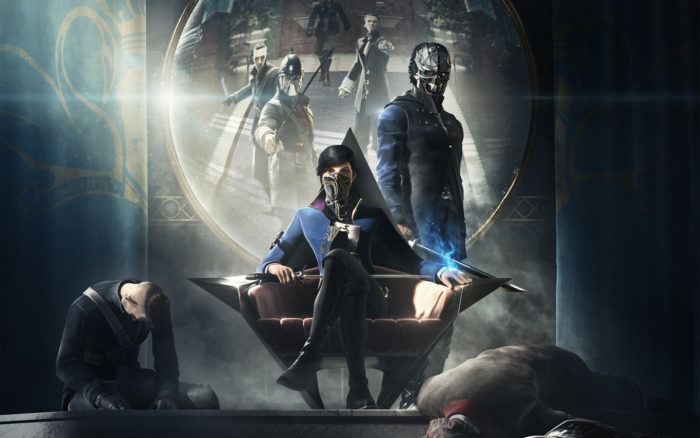 Back in 2012 developer Arkane Studios released the original Dishonored to high praise, despite its narrative woes, thanks to its sheer level of replayability. Four years later the sequel has arrived, and it’s very much the master, not the student. Dishonored 2 is everything a fan would want from a sequel, though it’s the smaller details and deeper focus on story that makes it a worthy successor to this franchise.

Set several years after the events of the first game, Dishonored 2 picks up the story of Corvo Attano and his daughter Empress Emily Kaldwin. Soon a long lost heir to the throne arrives for a violent overthrow, leaving one of the two heroes transformed into a marble statue, while the chosen protagonist is locked in their bedroom. However, you won’t stay imprisoned in the familiar city of Dunwall for long, as you retreat to the southern city of Karnaca in hopes of formulating a plan to save your kingdom.

The story this time around feels far more personal than the previous game, as the fight to retake Dunwall is a genuinely compelling narrative to drive the gameplay forward. This is only enhanced by the fantastic voice acting from the principle cast, which features voice overs for both Corvo and Emily. Having our protagonist talk this time around helps develop a connection with their struggle and offers much needed personalities.

For those curious enough about the world, players can explore the open levels for books, journal entries, and notes that help flesh out the universe and culture further. Even the mysterious Outsider, a character originally relegated as an exposition dump, takes a larger role this time around. In fact, the supernatural elements of the original Dishonored have been cranked up, which not only helps the general lore, but allows the level design to offer more than static castles and manors.

While Karnaca shares some similarities with Dunwall, it’s the rich, colorful pallet that gives this city a refreshing change of pace. Each of the nine missions are vastly opened up and are ripe for exploration and discovery. You’ll stumble upon a lot when exploring this city, as Dishonored 2 is full of interesting citizens, locales, and technology that help the area appear far more alive. Karnaca feels like a living, breathing world compared to the drab streets of Dunwall in the first game.

Yet, these massive levels offer more than just shops, apartments, and back alleys; each mission is set in a unique location that has its own personal quirk. The aptly named Clockwork Mansion can change and shift with the pull of a lever, while The Grand Palace is full of drunk party guests passed out everywhere. While I won’t spoil how, mission 7 is perhaps one of the most inventive and interesting level designs we’ve seen in recent memory. There are new challenges at every turn, which helps keep the general simplicity of each mission from growing stale.

Yes, you are pretty much just searching for people to kill 90% of the time, but the freedom of how you go about this allows each encounter to feel vastly different. My first run was the traditional stealth route on Emily, which felt both natural and incredibly fluid. Each level encouraged trying different routes and exploring areas you wouldn’t normally consider, which makes sneaking through a mission undetected far more rewarding. There are always multiple approach options and Dishonored 2 never feels as if it’s punishing you for trying to go lethal or non-lethal

While the campaign itself took me roughly 15 hours to beat, you can easily add another 5 hours onto that time through sheer experimentation. Thankfully, Dishonored 2 not only allows for you to seek new paths, but damn near encourages it thanks to an easy to use Quick Save and Quick Load option. Don’t be surprised if you find yourself reloading areas to see which way is more effective for killing a target.

However, if you want to actually slay your foe, expect to come across a vast array of enemies that span the gambit from basic guards to mechanized monstrosities. Bloodflies have replaced rats this time around and are far more aggressive to players wandering into their territory. Combat is more nuanced than it was before, with enemies trying to parry your strikes and occasionally locking swords with you. Even with your powers, it’s hard to feel as if you are god slaying insignificant foes, as the A.I. is more than willing to gang up on you.

Yet, you won’t be relying on just your sword and powers to fight — Dishonored 2 has a fair number of tools both new and old. Items such as Howler Bolts blind enemies and open them up for attack, while fan favorites like the Spring Razor trap make their bloody return. The only problem is that outside of finding loot in the world, the only way to restock on tools is by visiting a black market in the city. Since you are dropped off at a new section each mission, you will have to scour often to resupply. While I understand wanting to encourage players to visit every nook and cranny, the lack of waypoints for these vital stores can be frustrating at times. Especially if you’re running low on key items or elixers to restore your mana.

In terms of powers, Emily received the bulk of new abilities, most focused on giving her a multitude of engagement options you previously didn’t have with Corvo. While her Far Reach acts as a pseudo Blink at first, once you start upgrading her skills, key differences begin to appear. Her abilities feel like scalpel, each one used to precisely take down key enemies or even the odds of a fight. Powers like Doppelganger can be used to lure foes away from key areas or into traps you’ve set, while Domino allows you to clear an entire room with one move. Many of them feel far more adaptable for stealth gameplay, but using them in chaotic fights can be liberating.

Corvo, on the other hand, is rocking the same suite of powers from the original Dishonored, with them receiving only minor adjustments. This is perhaps Dishonored 2’s biggest disappointment, as he doesn’t really get anything new to play around with. Sure, using Bend Time and Possession to make opponents shoot themselves is amusing, but it would have been nice if fresh abilities were on the table. Playing through Dishonored 2 with Corvo made it feel less like a full sequel and more of an expansion to the core game.

The same cannot be said for the Bone Charms, which have gotten a complete redesign for the better. While you still have to go out into the world and find these rare items, the abilities they offer can actually be fused together. If you collect enough raw whale bones, players are able to construct their own charms by infusing various powers they’ve collected. However, the more powers you add, the higher chance you have of creating a Corrupted Charm, which have a very high risk, high reward philosophy. This can allow for Corvo or Emily to gain a plethora of passive abilities, which can compliment virtually any playstyle in interesting ways.

Yet, Dishonored 2 doesn’t get away completely unscathed, as the game does have a few technical issues. During my time with both Emily and Corvo I experienced some dips in the frame rate, a few problems with the audio from NPCs overlapping each other, and the occasional quick save file that had me instantly killed upon beginning. However, most of these were few and far between, and I had no hard crashes or massive problems that took away from the experience.

Dishonored 2 is the bigger, badder, and bolder version of the original game, thanks to its densely packed world and wonderfully enjoyable mechanics. Even though the experience only has nine main missions, the amount of replayability and exploration offered allows this title to always feel exciting. This is only enhanced by the interesting characters and story that string each level together, which makes Dishonored 2 a more than worthy sequel to the first title. Even with a few technical hiccups and lack of new powers for Corvo, this trip to Karnaca is one worth taking again and again – just make sure to steer clear of Bloodflies.