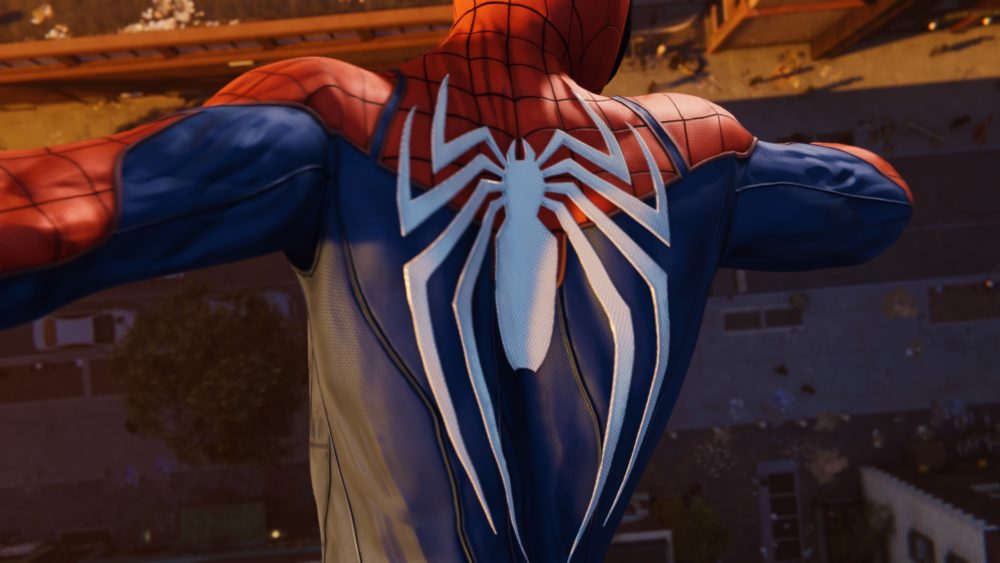 Whether it was it’s opening cinematics that are just so typically Spider-Man, or when it showed the group of 20 goons I just dispatched seamlessly without taking a hit, tied up in a giant web ball hanging off the side of the building, while Spidey comically remarks about saving them from inevitable jail time, there were just so many times where Marvel’s Spider-Man left me so charmed and enthralled. Spider-Man is a beloved franchise to many, and Insomniac Games has delivered a near-perfect, immersive, and cinematic experience that does everyone’s favorite neighborhood hero justice.

Marvel’s Spider-Man doesn’t try and rehash a story that we’ve been told before or tell an origin story. It’s not an adaptation of any of the movies or story arcs from the comics, but an entirely original story, making it perfect for long-term Spidey fans, or relative newcomers with little experience.

Having been Spider-Man for eight years at the time we pick up the story, Peter Parker is already competent with his various web-slinging abilities and the responsibilities he takes on as being the vigilante superhero of New York. The game’s opening moments see Spider-Man quickly dashing his way out of his apartment window on the way to help take down criminal kingpin, Wilson Fisk. However, after bringing down Fisk, Spider-Man creates a power vacuum that results in many rivals trying to take control of the city in his wake. Cue plenty of epic city battles, dark secrets to uncover, and familiar, albeit not friendly faces showing up.

Though we’re not going to go into specifics of the story in our review, Marvel’s Spider-Man does an excellent job at really making you feel like Spider-Man himself in the way the narrative is told. With its opening mission, the game sets the bar pretty high for epic spectacles and frantic action; and yet, with each of the game’s three acts that went by, it lifted it further. By its final act, Spider-Man’s story and action are at their most exhilarating, truly putting your skills as the web-slinging superhero to the test.

It’s not all about the superhero identity itself, though. Marvel’s Spider-Man takes some time to analyze the man behind the mask. You’ll often get to control Peter, interacting with other characters or completing a few minigame-like puzzles in his work at the laboratory. This look at both sides of Spider-Man certainly helps to up the impact of its story, giving you a reason to care for Peter. He has loved ones, a complicated relationship, a stressful day job, and then this alter-ego to assume so he can save the entire city. I just kind of wish that they’d gone about showing us both sides a little differently.

Why we needed to control Peter for what are mostly just walking over to a character and watching a cutscene I’m not entirely sure. There’s nothing that fun about the gameplay, and it essentially stretches out what could have been relayed to the player in a cutscene. Similarly, there are moments where you’ll take control of MJ, Peter’s ex-girlfriend and reporter at the Daily Bugle. Due to her non-combative profession, sections playing as her are strictly limited to overly simple stealth missions and taking photos of important documents or evidence occasionally. It’s not that these sections are horrendously bad, but they could have been implemented in a much more effective manner. For example, at one point, you’ll be controlling MJ advising Spider-Man of enemy locations and when to take them down. During this whole section, I only wished that the roles had been reversed, and it had been a puzzle of sorts to figure out which target MJ was trying to point out to me.

Unfortunately, these non-Spider-Man sections of gameplay often slowed the pacing of the experience entirely, which is a crying shame considering otherwise, it’s a masterpiece.

Thankfully, most of the time you’ll spend in the game is largely as the superhero himself, and damn does it feel good. As an ordinary human, traversing the streets of Manhattan is nightmarish. As Spider-Man, it’s a complete dream, thanks to how great the traversal feels. Initially, getting to grips with chaining different moves together can take a while. However, after an hour, I was seamlessly transitioning from a point launch, flinging myself off a building, dive-bombing into the bustling streets of Time Square below, before firing a web onto the side of a nearby building to see me soar back into the skies. Simply put, if you think you can do something with the various skills and moves at your disposal, you probably can.

That’s what makes Spider-Man so damn fun. The fact that Insomniac Games has nailed how it feels to get around the city as Spidey elevates the rest of the game, and the fact that it’s simple and intuitive prevents there from being an off-putting learning curve to be able to do the things you see in the movies. Manhattan is bustling with side missions, activities and collectibles for you to complete at your leisure, and crimes frequently just happen and you’ll be given the chance to act fast and save the day.

Even just getting to the next main mission was entertaining, and it often led to me getting distracted, seeking out collectibles or grabbing photos of landmarks for precious tokens (more on them later). Making exploring and finding all of the collectibles not feel like a chore, is something Spider-Man should absolutely be commended for.

The seamless fluidity of Spider-Man’s traversal mechanics also plays into its combat. In fact, the whole thing feels like what you’d get if you took the combat from Rocksteady’s Batman Arkham series, but gave it a parkour makeover, complete with web-slinging attacks, an array of Spidey gadgets, and countless combat abilities that can be unlocked with skill points (earned every time you level up). The simple controls may initially make you think that button-mashing will see you succeed every time, but that’s not the case. There’s an element of finesse to each fight with multiple enemies. A deadly, but stylish dance, as you dodge over enemies, webbing them in the face, before sliding through the legs of a shield-wielding enemy, to strike them from behind, finishing them off with an aerial combo and landing a swing kick from your web to knock the last one out.

Enemy variations force you to mix up your attacks, too. Heavy enemies require you to web ’em up before you can deal damage, shielded enemies can only be attacked from behind, ranged weapon-wielding enemies will constantly have you ready to dodge or disarm them with a quick web yank (if you’ve got the skill unlocked), and so on. Throw all of these together into one fight and that’s when you truly feel like Spider-Man, as you use every weapon and ability in your arsenal to take down bad guys effortlessly.

That being said, there was the odd occasion where the camera became more of a nuisance in combat than the enemies surrounding me. It would often try and move into an angle it thought would give me the best view of my enemies, but in doing so would prevent me from being able to web fling an item as it was no longer within my view. While surrounded, this minor irritation can lead to death, especially if you get knocked down and surrounded as a result.

These skills are well worth investing in, but that’s not all you have access to. There are a variety of suits, suit powers, suit mods, skills, and gadgets for you to unlock as you progress through the game. By picking out the right ones, you can fine-tune Spidey to match your desired play style. Want to go the stealth route? Go ahead and choose the skills that increase stealth takedown distance, and the suit mod that prevents enemies from alerting others when they spot you. While the suits themselves are often impeccably detailed throwbacks to past Spider-Man outings, the suit powers they unlock and the suit mods you can craft can be switched out at any time, meaning you can constantly change up your loadout depending on the activities you’re doing about Manhattan.

In order to unlock suits, mods, and the aforementioned Spidey gadgets, you’ll need tokens, which come in a bunch of different varieties. Stop a random crime going on as you’re on your way to the next main mission? You’ll get crime tokens. Landmark tokens are earned for capturing photos of iconic landmarks, challenge tokens are earned by completing challenges unlocked later in the story, backpack tokens are earned by finding these collectibles, while base tokens can be gained by clearing enemy base outposts.

The fact that Spider-Man ties all of its side content into earning this upgrade currency, so to speak, gives you even more reason to take a break from the main story and simply enjoy the open-world playground that Insomniac has crafted as you go. Because who doesn’t want to fight crime in the Home-Made Spider Suit?

Of course, when it comes to superhero movies, while substance is important, you’ve got to have a healthy dose of style to wrap it all up in. Marvel’s Spider-Man looks stunning on PS4, with individual threads on the Spidey suit visible, lighting effects making Manhattan look magnificent at all times of day, and great motion capture on the main characters. While playing on a PS4 Pro, the framerate remained consistent, with the action never visibly slowing down.

Insomniac Games has delivered an exceptional Spider-Man experience that blows its predecessors clean out of the water. Its open world is not only delightful to marvel at, but is constantly alive with crimes to stop, side activities to distract you, and most importantly, buildings to swing from. In its three acts, Spider-Man’s main story took me from feeling like a competent Spider-Man, to the Spectacular Spider-Man, and the combination of perfect traversal, frantic combat, and plenty of content means you won’t want to stop playing until you’ve seen it all.

After 30 hours, I’ve wrapped up Spider-Man’s story, completed a substantial amount of its side content, and have almost got every suit mod and skill in the game, and I just want to keep playing. Though it has a few minor blemishes here and there, they’re never significant enough to really detract from the overall experience. Whether you’re a long-term Spider-Man fan or someone who only knows a little, Marvel’s Spider-Man is an incredibly easy game to recommend for anyone who owns a PS4.