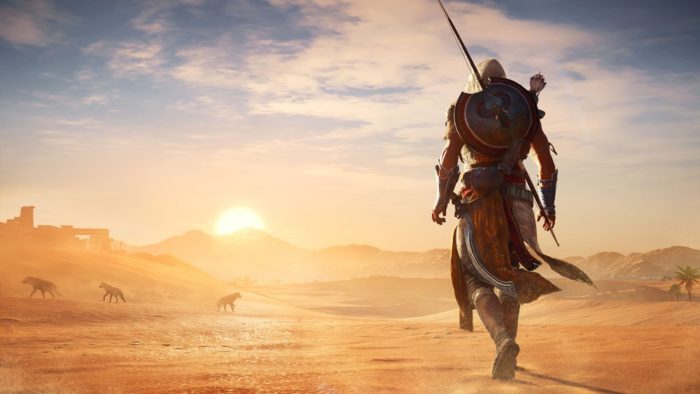 I last plunged a hidden blade into the throat of some corrupt official within Ubisoft’s rich, historical universe two years ago. At that time the Assassin’s Creed series was starting to show its wear and tear after being annualized for so long. Cracks were showing within its once pristine facade, and fans were understandably growing bored. For all the new bells and whistles each release boasted, the games, with very few exceptions such as Black Flag, were pretty much the same ol’ thing each and every time. Ubisoft surprised the world by taking a break, giving the next entry more than the usual 12-month gestation period. The result of that extra year of development is Assassin’s Creed Origins, a game that looks to move the series forward by taking fans further back than they’ve ever been.

Players take on the role of Bayek of Siwa, a Medjay of Egypt whose responsibility is to protect his people. Unfortunately, a run-in with some masked figures working in Egypt’s shadow sends Bayek on a quest for revenge that spans the whole of Egypt and sees him entrenched within the ongoing civil war. Through his trials and tribulations, the birth of a creed that will eventually lead to the brotherhood fans know today is revealed.

To be honest, I wasn’t that interested in just seeing the birth of the creed. On paper, it sounds pretty straightforward and outright dull, not much different from the journeys of Altair, Ezio, or even the recent Frye siblings. There’s always something being established, and we as players got to witness it, whether it was a new brotherhood, or a gang, or a township, we’ve seen it happen. And you can change the name of what’s being built as much as you want, but it essentially plays out the same. But it seems Ubisoft was well aware of this cookie-cutter plot they’ve used in one form or another in the past. Witnessing the origins of the assassins we know today is just the tip of the proverbial iceberg when it comes to Assassin’s Creed Origins. I went in thinking that I would simply witness the moment when their rules were established and their symbol was chosen. Instead, I bore witness to what happens to be a deep, heart-wrenching story that shows a family torn apart and the anguish that comes with trying to make things right.

The writing in Origins is among the best the series has seen. Yes, Bayek is consumed with revenge and justice, but he also recognizes his role as Medjay. He is a protector, a family man, and a true son of Egypt. He witnesses suffering and strikes out to right the wrongs he sees. He’s plagued with dark visions, memories of everything he lost that drive him forward on his journey. He is not alone though, for he has his wife, Aya, an aide to the true ruler of Egypt, Cleopatra. She is more than what she seems and proves to be rather important as things pick up. The enemies they seek out are mysterious, hidden behind masks and the names of animals, calling themselves the Order of the Ancient Ones.

They are a clear precursor to the Templar order players have faced so many times throughout the series, but they are somehow different. Each individual is unique with their own goals and hopes that feed into the overarching theme of forcing order. It’s not unheard of to sympathize with some of them, much like Connor did with Haytham’s desires in Assassin’s Creed III. While they all do vile things, you can see why some choose to do them (although some are just straight up evil). It’s interesting to explore their motivations and see the effect they have in their respective regions of Egypt as they sow the seeds of discord in order to distract and seize power later on.

One thing that helps the story sing out so well, though, is the world in which it’s set. Ubisoft has done their damnedest to recreate Ancient Egypt, and it is an absolute sight to behold. It’s clear that this sandbox was one of the primary focuses of the extended development period provided to Assassin’s Creed Origins.

The game’s world is massive. Just how big? I’ll put it this way. After beating the main story of the game, which is quite long and sends you to many different towns and cities full of distractions, I still hadn’t seen about half of the world’s map. Part of me wondered if it was just empty expanses, but upon further exploration, a lot of it is just as rich as where the main narrative takes you. It’s full of sweltering hot deserts, small oases, villages, and sprawling cities that showcase the architectural genius of both the Egyptians and the Greeks. You can explore it all, with many structures even letting you venture inside their walls. I found myself sitting in Greek universities reading the theorems of mathematicians, or just sitting outside as philosophers lectured the listening crowds. When I wasn’t keen on brushing up on my math and theology, I explored the labyrinths hidden within tombs and mapped my way through the back alleys of bustling neighborhoods.

There was always something to see, hear, or, most importantly, do. There are a lot of quests in Assassin’s Creed Origins. At the time of writing, I’ve done nearly 90 of them and still have a lot more exclamation points dotting my map. These come in many varieties, from saving some soul who found themselves in the wrong bandit camp to investigating crimes that legitimately have you seeking out clues and sometimes looking at a representation of the events, Batman-style. While a lot are straightforward and have very little in the way of pomp and circumstance, some are rather deep with long lists of objectives and even full-on cutscenes.

While Ubisoft certainly expanded on the content normally available in Assassin’s Creed with the impressively large map and tons of quests dotting it, there are also some changes made to the core Assassin’s Creed formula that may affect how some players feel about the game. One of the biggest changes, and the first that most are sure to notice, is the combat. This isn’t your typical, combo-based, one button counter system that pretty much every game up until now has used. It’s more along the lines of your typical ARPG. You have your light and heavy attacks, you have a dodge, you have a shield (depending on the weapon type you’re using), the camera doesn’t just pull away to show everyone involved. It stays pretty close to Bayek at all times putting extra importance on being aware of your surroundings. Also, enemies aren’t pushovers, capable of using pretty much every ability afforded to you as well.

Tying into the combat, and gameplay in general, is the RPG system. The series has always flirted with RPG mechanics, but Assassin’s Creed Origins embraces them wholeheartedly. There’s a full experience system, a branching skill tree, upgradeable gear, and even different rarity tears for the weapons you can obtain. Each area and mission has recommended levels, and you should take them seriously. The game is punishing at times, and a two-level difference is a noticeable one, anything beyond that means you should probably just feed yourself to a hippo.

Thankfully, the level and gear system don’t come across as overbearing padding as it can in some other titles. There’s a steady progression for those who put in the work, exploring everything they come across and helping those in need. Plus, I never noticed a shortage in gear drops. I’ve yet to spend a single dollar in the game’s store and I have some potent legendary gear (the highest possible tier) already. I can burn enemies, cause bleeding, and Bayek has amassed a decent repertoire of combat maneuvers that makes fighting interesting.

For all that the game has added, though, some things have been removed as well. One change that may divide some fans is the absence of the synchronization system. This was a system that provided a checklist of tasks that, when met, would lead to a perfect recreation of that memory. It usually included things like going full stealth, eliminating your target in a specific way, or taking a certain path. Origins is truly open, letting you do what you want, when you want. With the exception of one particularly scary fever dream (which we won’t spoil for you), you’re free to come and go as you please. Don’t think you’re ready to do the very last part of that one mission? Just go on another one, no big deal.

Another absence is the extravagant traversal that the series kept evolving. Don’t worry, parkour is still a thing. But you don’t have your rope launcher or insane parkour paths that see you running like a madman above cities. There are no vehicles to surf on or anything like that. There’s no hook blade. But that never felt like a shortcoming. Egypt isn’t as vertically versatile as other locations the series has taken us to, but that doesn’t mean its boring to get around.

Assassin’s Creed Origins did keep one thing that would’ve been better omitted. The series is known for having some odd bugs, and they rear their ugly heads in this massive adventure as well. Getting stuck in geometry, floating enemies and other issues, missing objectives. I will give Ubisoft credit for stepping up enemy AI, though. There aren’t as many endless feeds of death anymore, with your opponents flanking you intelligently and using the world to their advantage. But the sometimes hilarious bugs do remind you exactly what game you’re playing.

I should note that only twice did any of these bugs force me to restart anything. Sure, one or two led to a death, but a few of the more troublesome issues were fixed by either pausing and unpausing, or fast traveling away and returning. Still, it was interesting to see that even after this long break, the very same bugs are still alive and kicking.

All in all, though, it’s difficult to have any serious gripes against Assassin’s Creed Origins, especially as a fan of the series. But that in itself may be telling. For all its changes, which are much appreciated, there’s no denying that this is very much so an Assassin’s Creed game. No amount of desert or RPG systems is going to change that. If you hated the games before, chances are that you just might hate this one as well. However, this may be one of the very best in the series, and yes I know that Assassin’s Creed II and Black Flag exist. Ubisoft didn’t take that extra year to just give us the same old thing. At the core is an Assassin’s Creed game, but around it is a massive experience full of plenty of intrigue, wrapped in a gripping story, and bursting with content.

What we have here is a game that is more than it seems. Origins is a fitting title because there are a lot of beginnings to witness, many of which will pique the interest of lore aficionados. There is so much more to it than Bayek and his journey for vengeance. When the dust settled I found my gaze fixed upon others who too found interesting beginnings. Even now, after beating this story and finishing off this review, Assassin’s Creed Origins clearly has more to reveal to me. Many were wondering if more time would do the series any good, and I can now safely ask: why didn’t they do this sooner?