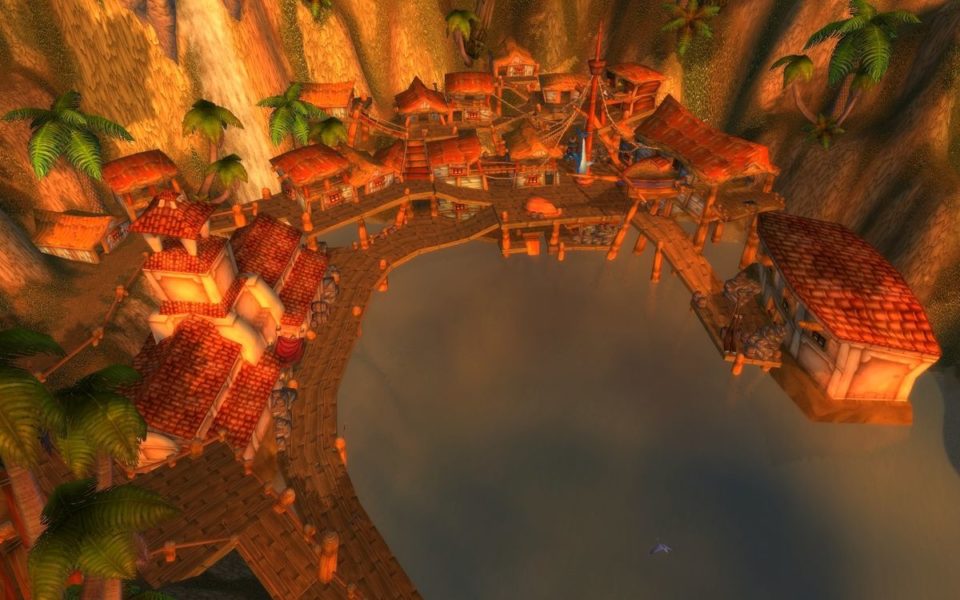 How to Get to Booty Bay in World of Warcraft (WoW)

Booty Bay isn’t what it used to be compared to during World of Warcraft’s heyday, but it’s still worth a visit to the goblin pirate city, as it is still one of the most unique in Azeroth. This area is essential if you’re trying to raise your reputation with Booty Bay, which is required if you’re pushing for World of Warcraft’s Insane title or the Pureheart Courser mount. World of Warcraft’s Booty Bay has a few unique vendors, too, selling lots of goods for professions. Booty Bay is also the closest hub for the Stranglethorn Fishing Extravaganza, which has transmog items, an heirloom ring, and a meta-achievement for the winners. Here’s how you get to Booty Bay in World of Warcraft.

For lower level players with no flight paths, run south from Stormwind into Darkshire, in Duskwood. Follow the main road south through Darkshire and turn west with the road, and keep going west until there is a junction south. Use your map with the ‘M’ key to help you, then move south into Stranglethorn Vale. Pick up the alliance flight path as soon as you enter the area, which players can access by going over the dry gulley bridge, follow the road, then turn west, into the Rebel Camp. From here, keep heading south on the road, pass by the Venture Trading Company Base Camp. You should then pass the Gurubashi Arena, then head to the tunnel with a giant shark head on top of it – you can’t miss it. Head through and you’re in Booty Bay.

Horde players will have an easier time of it. Players can make their way through the Barrens, south-west from Orgrimmar’s entrance. Open your map, head to Barrens, follow the main road south until you hit The Crossroads, then take the road left to Ratchet. Pick up the flight point for later use, then just catch a ride on the boat to Booty Bay at the harbor. If you can’t find the boat, ask a guard in Ratchet. Alternatively, catch a zeppelin from Orgrimmar to Grom’gol Base Camp, then make your way North to Booty Bay. Beware if you have War Mode on, however, as this place is a notorious World of Warcraft PvP area.

That’s all there is to know about how to get to Booty Bay in World of Warcraft. For more tips and tricks on the game, be sure to search for Twinfinite.