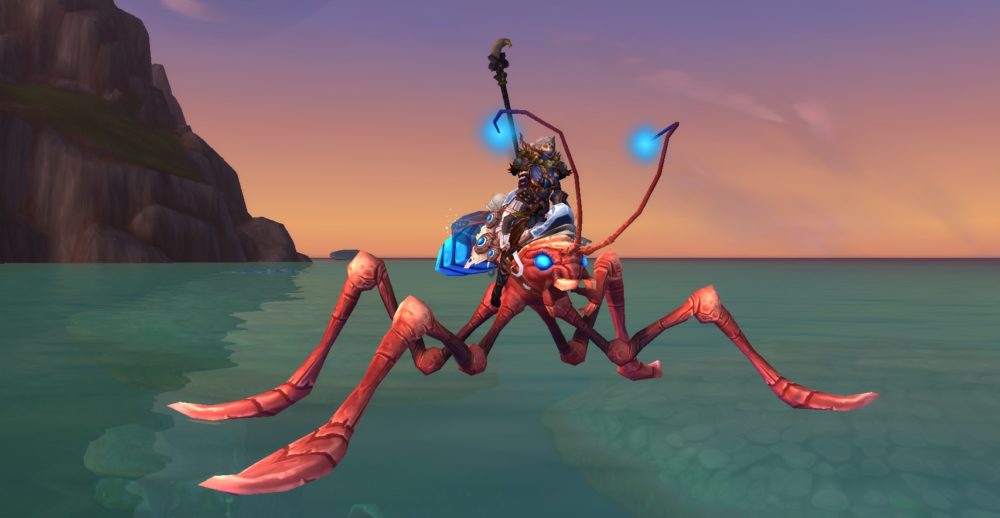 In order to get the strider mount, players will need 5,000 gold and Exalted status with The Anglers, a group of fisherman in Angler’s Wharf. In order to grind out this rep, players will have to complete a series of daily quests. Daily quests in World of Warcraft are repeatable, time-gated quests that reset once a day. There are three fishing dailies in Angler’s Wharf, which each reward 500 rep. Players should seek out Nat Pagle in the area, too, as his fishing dailies award Anglers rep, albeit slightly less at 350.

Next on your quest for the strider, once players hit revered, they should purchase the Grand Commendation of the Anglers which doubles the rep gained from Anglers quests. There is an alternative method is the Mists of Pandaria Timewalking event is on, however. If this event is on, players can grind out Mists of Pandaria dungeons through the World of Warcraft Dungeon Finder for Timwarped Badges. Players should then head to Timeless Isle in Pandaria and find the Timewalking vendor, who will accept these badges for rep tokens. Players can purchase a token for 50 badges.

If you’re lost or have never gone to Timeless Isles, get the quest Journey to Timeless Isle from the gnome Chromie in Mogu’shan Palace in Vale of Eternal Blossoms, which awards the Curious Bronze Timepiece. Use this timepiece to teleport to Timeless Isle, then abandon the quest after completion if you wish to save time. The strider vendor, Mistwalker Xia, can then be found on the Eastern edge of the Celestial Court.

That’s all there is to know about how to get the Water Strider Mount in World of Warcraft: Battle for Azeroth. For more tips and tricks on the game, be sure to search for Twinfinite.