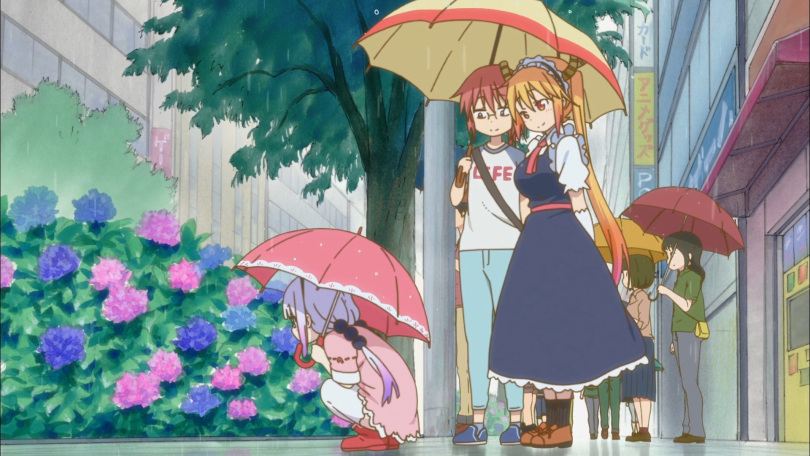 When it comes to anime, you may come across the big and ever-growing slice of life genre. Slice of life anime can often be recognized by their depiction of everyday life. Characters do ordinary tasks and discuss ordinary things. Yet, these normal situations are also the stage for banter, drama, comedy, and even romance. Nobody’s out to stop the big baddie or save the world. It’s a genre perfectly suited for those wanting to take a break from the tense action and complex storylines. For this list, we’re taking selections from the best recent shows. So without further ado, here is a list of some of the best slice of life anime that you can watch right now.

Starting this off is an anime about young women playing games. Asobi Asobase is a simple, school life comedy that follows three high school students, Kasumi, Hanako, and Olivia. Kasumi has grown to hate games due to always being teased by her sister after losing. However, a chance encounter with the athletic Hanako and transfer student Olivia ropes her into a series of absurd events involving games and high school life.

Everyone knows the feeling of being bored at school and just wanting to mess around with their companions. Light-hearted and surreal, Asobi Asobase is a throwback to the silly times we had as kids. It’s a montage of exaggerated facial expressions and melodrama, but also sincere friendship. Even if there isn’t much room given to character development, the crazy ways in which the characters let loose help remind us that the best kind of friends are the ones who let you be yourself.

When you really think about it, people aren’t the only creatures that go on and about with their daily routines. Inside our bodies is a complex system that’s always hard at work to ensure we can keep doing what we do. Cells at Work! takes this idea and cleverly applies it to the slice of life genre. The result is a fantastical city inside us hosting anthropomorphic cells who, like us, are just living ordinary lives.

Red blood cells, white blood cells, macrophages, platelets, and more are few among the many characters you’ll encounter throughout this show. Part-entertainment and part-educational, Cells at Work! teaches about the human body, but also introduce interesting scenarios that happen in the body on a regular basis, from small cuts on the skin to bacterial infections. It’s an amusing show that embraces the slice of life genre to offer lessons that help you appreciate your little cells all the more.

It’s not often that a slice of life anime doesn’t revolve around high school. In Grand Blue, Iori Kitahara is a freshman at Izu University. The university sits in the quiet seaside town of Izu, and it is here that Iori moves into his uncle’s scuba diving shop, Grand Blue. With a new lease on life, Iori sets out to realize his ideal college life. Yet, even with a life filled with good friends, beautiful girls, and the vast ocean, things aren’t quite like he expects, for better or worse.

Despite its coming-of-age premise and the passionate opening, make no mistake, Grand Blue is an all-out comedy. And yet, anyone who has gone through university life may find a lot that’s appealing about this show. From getting naked in the pool together to orchestrating a desperate attempt to cheat the upcoming exams, it’s about living life to the fullest as much as it tries to make you roll over laughing.

Kobayashi is your typical office lady. She works an unremarkable job as a computer programmer and spends the rest of her time drinking, or at home playing video games. Yet, she leaves her apartment one day only to be met with the frightening sight of a dragon. Introducing herself as Tooru, the dragon takes up the form of a young girl and offers her services as a maid to the baffled lady, as repayment for saving her life. Though Tooru is physically strong and can use more than a fair share of magical spells, Kobayashi quickly realizes that Tooru has very little sense for managing a household. Crazy situations arise and more dragons stumble into Kobayashi’s life, further disrupting her once quiet life.

As crazy as the concept may be, Miss Kobayashi’s Dragon Maid is also a strangely relatable story about immigrant life and family. Tooru’s struggles with integrating into human society, as well as her devotion to helping Kobayashi with daily routines get nurtured and eventually reach an emotional peak. The story is a comedy at heart, but isn’t afraid to dial back on its jokes to offer some insight into relationships and the challenges of living amongst people different from you.

A Place Further than the Universe

Mari Tamaki is a young high school girl who dreams to see what’s beyond her average life. Though she yearns to explore the unknown, it also frightens her to the point of stagnation. However, a run-in with a girl named Shirase who is planning an expedition to Antarctica finally spurs Mari into taking that first step. Along the way, the girls recruit Hinata and Yuzuki for an unforgettable journey to the frozen icelands.

It would be apt to describe A Place Further than the Universe as a slice of life anime about traveling. While Antarctica is the girls’ final destination, the show peppers locales throughout for the girls to experience on their journey. However, the show places a huge emphasis on the concept of youth. It’s a coming-of-age story through and through, exploring the anxieties of becoming an adult, as well as the wonders of finding one’s identity in this enormous world.

Here’s something a little more serious. Violet Evergarden is a story about a child soldier in a time when war has ended. With her arms replaced by mechanical prosthetics, and the one person she held dear lost in the flames of war, the titular character Violet finds herself at a loss of what to do. Eventually, she finds work as an Auto Memory Doll, transcribing the thoughts and words of her clients into written letters. It is in helping these people that she begins to understand the shapes of human hearts, leading to a discovery of her own true feelings.

Although Violet Evergarden is pretty plot-driven and employs a serious tone for many of its scenes, there are still plenty of aspects which lean it towards a slice of life show. The core of the show doesn’t revolve around Violet herself, but the people she meets throughout her life as an Auto Memory Doll. These are ordinary folk, with hopes and dreams that they share with Violet as they do the viewer. Some conclusions to their stories are uplifting, while others heart-wrenching. Either way, Violet grows with these stories of the everyday, and her progress is shown all throughout the show.

While many slice of life anime capture the intricacies of human interaction, few have a knack for capturing the beauty of spending time outdoors like Yuru Camp. Rin Shima is an avid camper and often goes camping outdoors, basking in the scenery of Mount Fuji. Though she normally camps solo, she soon stumbles upon a lost girl named Nadeshiko. This leads to Rin letting her stay over for the night. From there, they form a budding friendship with one common interest, outdoor camping.

Laid-Back Camp borrows from the quintessential aspects that made K-On the hit it was, but puts its own spin on things. The show depicts a cute and humorous bond between girls, making it the perfect show for ‘laid back’ viewing. Its vistas are drawn beautifully, and the process of camping to cheerful music only helps accentuate the serene atmosphere. Watching this show is like going out to hang with your friends after a long day. There’s nothing spectacular of note, but it’s an ease on the mind. To some people, that’s what slice of life is all about.