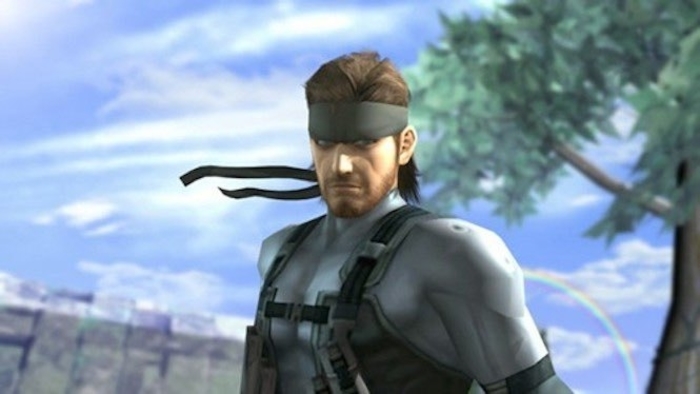 Nintendo has just unveiled and dived deep into the next entry in the Smash Bros. franchise, titled Super Smash Bros. Ultimate. The game looks glorious on the Nintendo Switch and it’s coming out this December, just in time to have some good ol’ fashioned fights with your friends and family over holiday break. One big aspect of the title that Nintendo pushed is the fact that Smash Ultimate is bringing back every single character that has ever been in a Smash Bros. game – yup, you guessed it. This means that those guys like Pichu, Young Link, Ice Climbers, and Solid Snake himself will be back in the fight club that is Smash Bros. Ultimate. These characters all look fantastic on the Switch, thanks to the graphical fidelity that the console has over the Wii U, but there’s just one small issue with one of the returning characters – Solid Snake.

You see, with Snake’s first appearance in Super Smash Bros. Brawl, he had a slightly larger… ummm… “derrière” than other fighters, which we all seemed to appreciate and sort of forget about, until now. With his return in Ultimate, it seems that Snake’s butt has gotten a severe downgrade and the old Snake butt fans on Twitter are going crazy about it. Here’s a few tweets from the outrage that has sparked thanks to Nintendo’s nerfing of our favorite booty:

LOOK AT IT, NINTENDO. IT WAS THE ONLY THING KEEPING THE STRAPS ON HIS SUIT TOGETHER. AS MUCH AS I LOVE TO SEE THE CLOTHES FALL OFF AS A RESULT I CANNOT LIVE THIS LIFE WITHOUT THIS MAN’S POWERFUL BUTT. pic.twitter.com/rot6IHWFs7

Smash Community: IT LOOKS UNBALANCED. DID YOU BRING BACK WAVE DASHING? I SURE HOPE YOU NERFED BAYO. WHY IS SNAKE’S BUTT SMALLER??

as there are more characters in the new Super Smash Bros than ever before, and we can only have so much butt in one game for processing reasons, we had to redistribute Snake's butt flesh among the returning challengers

nintendo shrunk Snake's butt and Samus' boobs but we can pray they left this alone pic.twitter.com/RmODwbUu9W

what did he do to deserve this

Yo nintendo, why give snake that little hank hill butt??? Snake definitely had a big thicc juicy butt and how DARE anyone downgrade him to the saddest pancake ass ive ever seen. Give my man's ass back!! Got him having thicc old thighs but no ass – just got him lookin goofy smh

Nintendo: we brought everyone back to smash
me: YES FINALLY AWESOME AMAZI-
Nintendo: but to save on memory we had to remove Snake's butt.

Give Snake his ass back, he looks like he wouldn't even be able to walk, it looks like his leg just continues up instead of having butt cheeks

What did they do to Snake's ass, Whered they put it

So not only Samus, BUTT Snake too got nerfed. Please fix for booty and bust Justice! pic.twitter.com/ofMpvb3YFB

Everyone disappointed by the fact that waluigi wasn't in smash but

HOW DARE YOU NINTENDO NERFING SNAKE'S BUTT IN SMASH BROS ULTIMATE? MAKE IT BIG AND ROUND AGAIN! HAVE SOME RESPECT FOR MY HUSBANDO! pic.twitter.com/jPuWdzsVCP

Somebody stole Snake's butt. He sits on his pelvis now.

SAME! Only thing I dislike is that they took away Snake's butt. It's a muscle, not fat or anything. They could've done away with the conforming crack, but they reduced the size of it entirely, doesn't look realistic.

Shame on you, Nintendo.

For more updates on E3 2018, make sure to search for Twinfinite! If you’ve missed it, here’s how Twitter reacted to the Sony, Nintendo, and Microsoft press conferences.