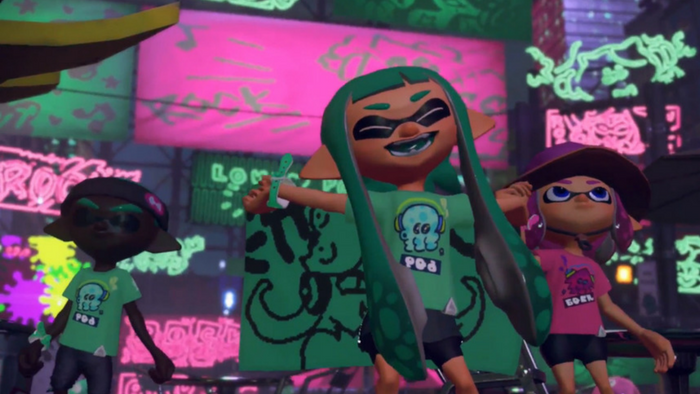 Today’s Splatoon 2-focused Nintendo Direct was chock-full of announcements surrounding the upcoming Switch sequel to the Wii U darling. Most of the fanfare surrounded the wide berth of customization options, shopkeepers, and stores available to players this time around, but some time was spent on other new features that hadn’t yet had much time in the spotlight.

On the customization front, you can change your eye color, hair style, and skin tone when creating your very own squid, and outfit them with items from the Inkpolis Galleria. Shops like the Ye Olde Cloth Shop, ran by a jellyfish known as Jelfonzo, or the shoe shop Shella Fresh, hosted by a spider crab named Bisk, are available to explore and cop some awesome clothing and accessories. Yes, the shop is called Shella Fresh, and that means everything is right with the world. There’s even a hangout spot in the form of Crusty Sean’s (get it? crustacean?).

But there’s more to the game than just shopping and hanging out, of course, as fun as those things are. Ranked Battles are coming to Splatoon 2, featuring three modes: Splat Zones, Tower Control, and Rainmaker, all of which will rotate out in Ranked battle mode every two hours. Win a Ranked Battle and you’ll increase your rank. You’ll need to play online to raise your rank, but you can play these game modes with local multiplayer opponents in Private Battle if you so choose.

You’ll be able to track your past 50 matches via the new SplatNet 2 mobile app as well, by way of the Nintendo Switch Online app. It launches on July 21, and will help you track your Splatoon 2 games online as well as match up with other players. If you’re so inclined, you can also check your lifetime “inkage,” or how much turf you’ve inked compared to places in the real world.

If you’re one to prefer solo play, the single-player adventure is still coming, following the trek to figure out where Squid Sister Callie has disappeared to. Where’s she gone? She’d better get back, right now!

If it seems like the wait is too unbearable at present, there’s even a new Splatfest demo coming on July 15 from 3 to 7 PM PT, so you can download the free demo later today and vote for the team you want to be placed in ahead of the Splatfest’s official launch.

There’s plenty of new optimization options, weapons, game modes and other goodies to get into if you’re looking forward to Splatoon 2, so get ready for July 21 to roll around by gathering your favorite squid kid amiibo figures and taking the plunge!