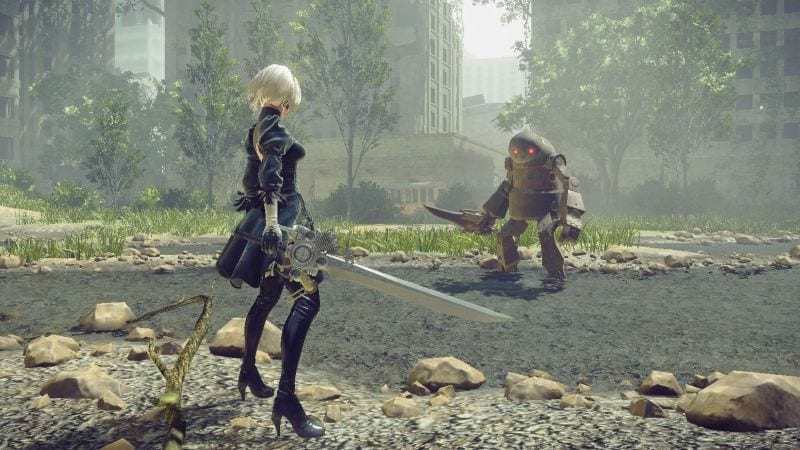 In NieR Automata, weapons are used by characters 2B, 9S and A2. These weapons could be found around the world and collected. There are 4 main types of Nier Automata weapons: Short Sword Weapons, Large Sword Weapons, Spear Weapons, Combat Bracers.

How to Get All Weapons – NieR: Automata

NieR: Automata has a ton of weapons for you to collect, and each of them comes with a unique weapon story that you can unlock by upgrading them. Listed below are all the weapons and their locations in the game.

Faith – Found in a chest located in the resource unit near the Flooded City. Can only be obtained with 9S during your third playthrough.

Iron Pipe – Go fishing in the sewer between the City Ruins and the Amusement Park.

Phoenix Dagger – From the access point near the tower in the City Ruins, go towards the rope bridge. On the right side of the rope bridge is a downward sloping path you can take. Follow the path to a hidden elevator, and enter it. You’ll reach a cave. You’ll find a chest containing the weapon near the waterfall in this area. This area can also be accessed by dropping down the waterfall in the Forest Zone.

Type-40 Sword – Complete the ‘Find A Present’ quest for Operator 60. Can only be done with 2B.

Engine Blade – Found in the Abandoned Factory. When escaping the area near the end of the third run, look for a door on top of the first set of conveyor belts with crushers. There is a chest in the room containing the weapon.

Cypress Stick – Found in the Forest Zone. From the entrance linking Pascal’s Village to the Forest Zone, climb onto the collapsed pillars and jump across the platforms in front of you till you find a chest that contains the weapon.

Iron Will – Found in the Flooded City. With the Scanner Pod, search the small area that you can drop to from the ruined highway.

Fang of the Twins – Found in the Desert Zone Housing Complex. While chasing the machine that leads you to the Adam fight, look for the fire escape stairs to your right. There’s a chest on top of the stairs containing the weapon.

Phoenix Sword – Found in the locked chest on the roof in the City Ruins where you start the game proper.

Type-40 Blade – Complete the ‘Data Analysis Freak’ quest for Operator 210. Can only be done with 9S.

Virtuous Treaty – Found at the Abandoned Factory’s entrance. You’ll get a map marker for its location when you gain access to the open world for the first time.

Cruel Blood Oath – Found in the caverns underneath the Desert Zone. It’s behind a locked door that can only be opened by 9S.

Phoenix Lance – Found in Desert Zone – Central. While facing the access point, head straight until you reach the edge of the white satellite circle on your mini-map. Turn left while still moving along the edge of the circle, and use the Scanner Pod to find the weapon.

Dragoon Lance – From the Forest Zone’s central access point, follow the waterfall all the way down. Turn right to find a Lunar Tear and a chest next to it containing the weapon.

Spear of the Usurper – Complete the ‘Heritage of the Past’ quest.

Type-3 Lance – Found in the Flooded City. Jump to the sloped building nearest to the waterfall. Look to your right and you’ll see a building you can jump to. There’s a chest there containing the weapon.

Virtuous Dignity – In the sewers between the City Ruins and Amusement Park, move past the first ladder that takes you to the park. There is another ladder at the end of the sewers. Climb up, and you’ll see a shrine housing the weapon.

Cruel Arrogance – Head back to the Abandoned Factory as 9S. Follow the escape route 2B took during your first run. After getting past the second wave of exploding machines, go through the conveyor belt (this is the one after the first set of crushers). Once you’re through, jump onto the platform above the conveyor belt to find the locked door at the end. Hack it to find a shrine with the weapon.

Angel’s Folly – Bought from Emil when he’s near the Resistance Camp.

Demon’s Cry – Found in the basement underneath the Amusement Park arena where you fought Beauvoir. The weapon is in a locked chest at the end of the hallway.

Type-40 Fists – Found in a locked chest behind the access point in the Resistance Camp.

Type-3 Fists – Bought from Emil when he’s near the Resistance Camp.

Virtuous Grief – From the Forest Zone’s central access point, head left, and then right past the training grounds. Keep heading in this direction till you’re near the edge, then look right to find some platforms you can climb up. Keep taking the higher ground, and leap across a couple of gaps to find a shrine housing the weapon.

Cruel Lament – Masamune hands this over once you fully upgrade a weapon.

Machine Heads – Wipe Pascal’s memories as A2. Once you have control over 9S again, go to Pascal’s Village and buy them from him.

That’s all the weapons you can obtain in NieR: Automata. Next, you’ll just need to upgrade all of them fully in order to access the game’s optional superboss. Be sure to check back with Twinfinite and our ever-expanding wiki for more tips, tricks, and information on NieR: Automata.