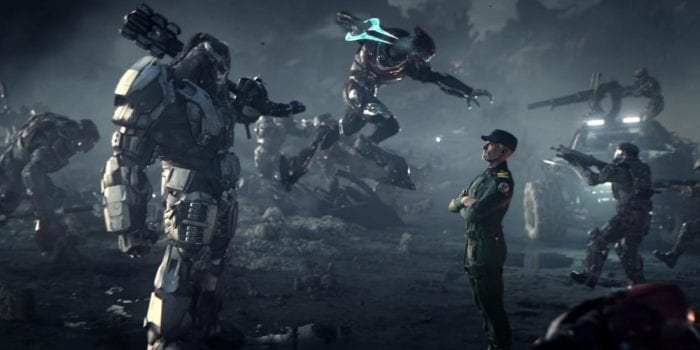 Always Keep a Scout Around

Halo War 2’s scout units such as the Jackrabbit and the Chopper don’t seem all that useful and in battle at first, and honestly, they aren’t that great unless they carry some kind of special perk that would give them an edge otherwise. However, just because they are a bit weak in battle, doesn’t mean the 20 energy scout units are useless. In fact, they are among the most useful units to use in Halo Wars 2’s Blitz mode for a number of reasons.

First, they are great for collecting energy while your army is away. Spawn them either where you have vision or at your base, and single select them to attack the energy container. Because of its speed, you’ll get there quicker than any other unit, assuming the distance isn’t too far, and you won’t have to move any attacking units out of favorable positions to get it. Unless you anticipate a battle at or near the energy, there’s no reason to send any other unit if you have a scout available.

The other extremely useful purpose a scout serves is to gank unguarded points. If you see an enemy shift its forces away from a control point or is just open for the taking, seize the opportunity and sneak a scout over to grab it without having to move any other attacker units. There are times where you can’t, or shouldn’t, shift army units away from a point or battle, so use the scouts to pick up some potential free points until you or a teammate are able to defend it outright. Even if an enemy quickly reacts to take it back, any amount of time that the scout was able to hold it is a few seconds that the enemy wasn’t. In Halo Wars 2’s Blitz mode, every second of control counts.

Finally, scouts can be a mobile source of vision for you to call units down to. If you want to spawn units at a corner of the map without moving other more valuable units there, just put a scout there and spawn away. You can use this strategy to quickly snipe separated enemy units if you know the battle fatigued unit can still take whatever unit you’re trying to jump.

Use the High Ground

Halo Wars 2’s Siege and artillery units LOVE the high ground so take advantage of those areas provided by The Proving Grounds. A point that is guarded by a line of units such as Locusts and Blisterbacks is brutally difficult to break. Cracking through a well stacked siege line will require a team effort from two players and leader powers. Even if the enemy is eventually able to break through (and many new players struggle with that feat), they will likely have needed to sacrifice lots of units and energy to do it.

The best part about this is that the longer your opponent waits around to move in on your siege line, the harder it becomes to break. You can either keep saving up energy (and score if you have the point advantage), or continue to add on more and more siege units to make it nigh unstoppable while your opponents make up their minds on what they want to do.

Use Team Vision to Your Advantage & Be a Good Teammate

While it may be obvious to experienced Halo Wars 2 players, newer players may not realize that you can see and drop down units anywhere that you and your teammates can see. Meaning you don’t always need to call down new units onto your army or your starting base.

Use that vision that you have to your advantage! Don’t just stare at your own army doing nothing. If you’re not seeing any action, watch what’s going on with your teammate. If your teammate is under attack, don’t keep adding to your own deathball army. Move forces over if you can, but if you don’t want to sacrifice your position, remember that you can also call down units to their position or use your leader powers to help them out.

Don’t be that person who sits with their army at one point the whole game while the other team holds the other two. You’re not being helpful locking down one point if your teammate is struggling trying to fend off two enemies so they can hold their own. You will eventually lose that way. If your opponents are focusing down your teammate, split your forces to help or call down reinforcements on their position at the very least.

Again, this might seem obvious to some, but if you’re a new or inexperienced Halo Wars 2 player, use the starter decks until you get a feel for a strategy that you want to use. At first glance, it may seem like a good idea to stack your deck with as many powerful cards and powers as you possibly can, but in reality, you need a deck that has a healthy mix of different energy values and army counters.

Forost of the early game, you’re going to be operating with something like 20-120 energy at any given point which isn’t enough to sustain an army comprised of nothing of tanks, super units, and leader powers. You need those cheaper energy cards to get you through the game and act as support for the more expensive units later on. In fact, you may want to cycle those expensive cards out if you get them early on in the game. Once you have a consistent flow of energy coming in, then you can start bringing out the big guns.

Also make sure you haven’t neglected critical support units that can either heal your or detect cloaked enemies. Without detection, for example, cloaked units can contest a zone for as long as they can remain undetected. Always keep at least one detection unit in your deck.

In Halo Wars 2, spawning into battle with fatigue sucks. They have reduced health, and cannot pick up energy. What’s even worse though, that many newer players do, is spawning fatigued units right into the middle of a battle in order to keep it alive. A battle fatigued unit will be annihilated quickly if thrown into the heat of battle, so don’t waste your energy doing so. Try to avoid spawning these units in mid battle unless they will tip a close fight in your favor (which is sometimes the right move). Sometimes, battles are just lost and you need to cut your losses and retreat.

Instead of throwing precious units away, retreat, regroup at your home base, and push out again with full strength. Mid battle, if you need reinforcements or anticipate that you will need them, spawn them over at your base and walk them over to where your army is fighting. Sure, you’ll have to wait a few seconds, but it’s better than wasting energy calling them in just to die three seconds later.

Spend Energy Wisely and Have the Right Hand Ready

Unlike the more traditional RTS modes where just having a bigger army and spending your resources more quickly than your opponent can earn you victory, in Halo Wars 2’s Blitz mode, every energy you spend is precious, and needs to be spent wisely. Don’t just spam units into battle. Look into the fog of war, and get an idea of the composition your opponent has. There’s no sense spending 20 energy on a scout that you don’t currently need just because you can afford it. Wait a few seconds and bring in that Cyclops or Locust instead.

Finally, don’t forget that you can cycle through cards for five energy each time. Obviously, you don’t want to cycle needlessly, but if you’re satisfied with your army composition and need a leader power to push you over the edge, don’t be afraid to cycle through a couple of cards to have it ready to roll instead of a card that won’t help you win such as scouts or units that match up poorly with your opponent’s current composition.

With these basic strategy and tips at your disposal, you should be able to hit the ground running in Halo Wars 2’s fast paced Blitz mode.