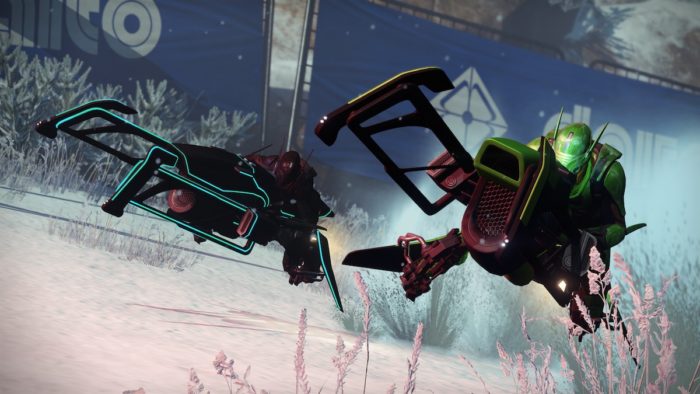 How to get the Lysander’s Cry Sparrow – Destiny: The Dawning

With Destiny: The Dawning released upon the world, eager Guardians are scouring every inch of new content for secrets, loot, and new items to collect and add to their vault. However, one of the more tucked away surprises is actually the Lysander’s Cry Sparrow, which has Guardians go through some rather random steps in order to obtain this fast moving vehicle. There is currently no other way to unlock this, though it doesn’t appear to be event locked like the Sparrow Broom was for the Festival of the Lost event.

First, go to orbit and load up a custom Skirmish match in the Crucible, making sure to select Bannerfall as your map of choice. The time of day doesn’t matter nor how many people are in your party when you do this. Start the game, and when you load into the match head over to where the C capture point is in the back of the map. Head off into the two-story building on the left (if you’re coming from the opposite direction) and enter into the bottom floor. Here you should see a ton of shelves and items stacked randomly about. Look for a shelf near the middle, tucked away against the wall with a ghost hiding behind some boxes. You can easily recognize it by the glow it lets off, and if you are having some trouble, walk around against the shelves until the “Interact” prompt pops up. Collect the Ghost and head back to the Tower.

Once you land make your way over to the hangar and pass by Amanda Holiday’s stand. Run by the man repairing the Sparrow and under the stairs that lead to Future War Cult’s lounge. You should see some boxes stacked by the railing — jump up onto them and there will be a present waiting for you. Open it and you will instantly obtain your shiny new Lysander’s Cry Sparrow. Now you can head off to Destiny’s Sparrow Racing League and ride in style!

For more Destiny: The Dawning guides make sure to check back with us here at Twinfinite.

Comments
Continue Reading
Related Topics:Destiny: The Dawning, For One Who Stood at Bannerfall, ghost, Guide, hidden, how to get, location, Lysander's Cry, present, quest, sparrow, unlock

Destiny 2: How to Use Your Sparrow
Destiny: For the One Who Stood at Bannerfall Quest Guide
Destiny: How to Get the Broom Sparrow in This Year’s Halloween Event