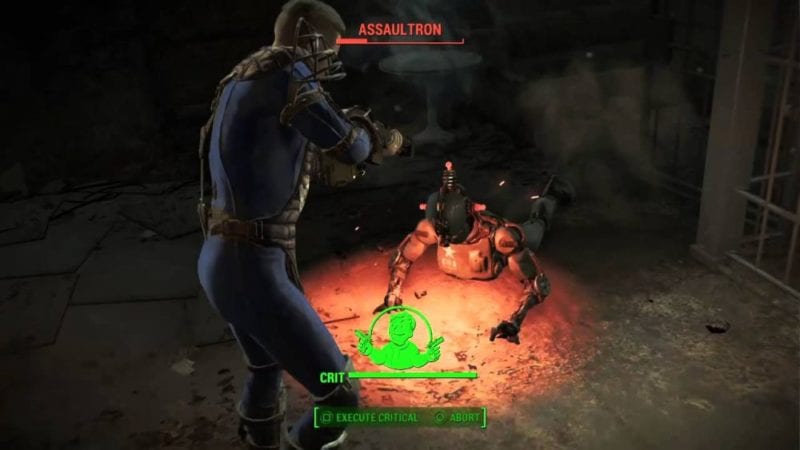 If you’ve been playing Fallout 4 for some time you’ve undoubtedly come across one of those devastating Assaultrons. These bots are sleek black versions of the other mechanical bad guys you’ll fight, and they are extraordinarily dangerous at all ranges. Even taking out their legs doesn’t stop them, which is the case for most enemies.

What makes these robots so dangerous is its eye-beam. Not only does it terrify wanderers with its loud hum before turning the screen bright red, it can one-hit kill most players, especially early on in the game. Automatron, Fallout 4’s first major expansion, lets you flip the script on your mechanical adversaries. You can actually find one of these Assaultron’s heads and use it as a laser gun of your own.

During the quest “Headhunting” (fitting), you’ll come across Ivey, a Rust Devil with a suit of Power Armor and a strong weapon. This is actually the same person you need to kill in order to get the Tesla Rifle and Tesla Power Armor. After killing her and her own Automatron, loot her body for the main goodies, but don’t leave the room just yet. Search for a chest that houses a few robot bits as well as a Salvaged Assaultron Head.

This weapon works almost exactly like it does when it’s actually attached to a robot. You can charge it up by tapping the reload button (Square on PS4, “X” on Xbox One) so that you can get a much more powerful beam. You should be careful though, this weapon actually irradiates the user meaning you’ll take on Rads. You should be safe in a suit of Power Armor, but keep some Rad-Aways on hand just in case you want to go eye blasting everything.

Its base damage of 49 is nothing to scoff at, but being able to increase that damage is the selling point for this pistol-like weapon. Of course, the reason most people will want it is to look like a badass running around with an Assaultron’s head. Hey, we aren’t judging you.