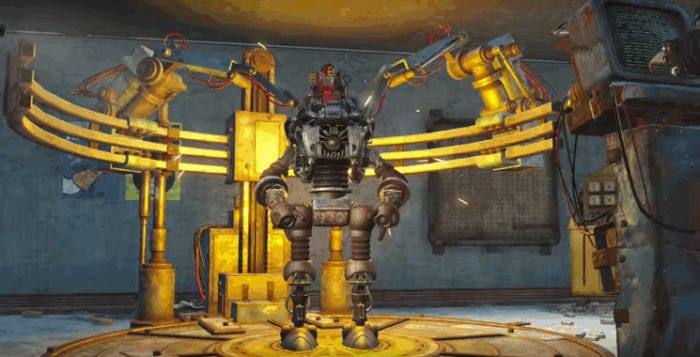 Once you get past the opening mission of Automatron, Fallout 4’s first major expansion, and build your very first Robot Workbench, it’s time to get to work. That workbench isn’t just for show, you are to build the best and baddest mechanical fighters this side of the nuclear explosion that destroyed your world. In the beginning, you’ll be able to build some basic, but useful, Automatrons to defend you, but you’ll need something much more special in the long run.

To build something tougher, you’ll need mods. These will allow you to build the parts that help to define your robot compatriots, and build some horrific defenders.

Mods are found easily, you just need to kill any of the new robots added by the Automatron expansion. They will always drop mods for you to collect, and once you collect a mod, you will be able to build it as many times as needed (provided that you have the resources, of course). Robots that existed before the DLC (regular Synths, Assaultrons, Protectrons, etc.) won’t drop any. So don’t waste your time trying to farm missions where you know you fight a lot of bots. Only the new ones will do.

You will want to hunt down a lot of robots though, as it will grant you way more customization options in the long run. Since you’re able to build as many soldiers as you want, you may as well add a bit of variety to the bunch.

Just keep in mind that mechanical enemies are weak against energy and pulse weapon types. Cryo weapons also help with taking them down. You’ll have to kill these guys to get the mods, and they won’t go down easily. Take your time, be careful, and you’ll have more mods than you know what to do with.

For general help on getting started in Fallout 4: Automatron, be sure to check out our handy guide.