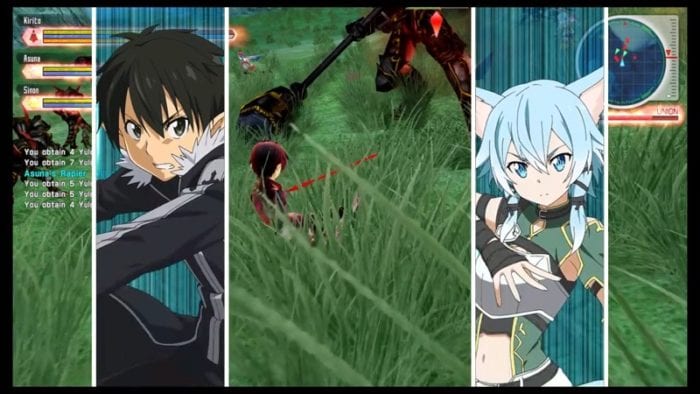 Switching is a mechanic in Sword Art Online that allows one player to trade places with another in their party in order to get out of danger and restore their resources. In Hollow Fragment it was done with a simple button press, but that’s not the case in Sword Art Online: Lost Song.

In this game, you must first fill up your Union meter which can be found in the upper right hand corner of your screen. You fill this up by simply engaging in combat; so run around and hit things. After enough combat, it will glow and say the word “MAX” in the center.

The Union Meter is located directly under your radar.

Once it’s full and glowing press R2 on the PS4 and both shoulder buttons on the Vita. This will place you in Union Rumble mode where all three characters glow red and do increased damage.

In order to Switch, you’ll want to hit Triangle + Circle, this will trigger a glowing blue attack that will cause a Switch Attack if it connects. Keep in mind that the Switch will only happen if the blue attack does not kill the enemy, so it will only work on very strong opponents.

Another thing you should note is that triggering the Switch will eat up your remaining Union Rumble, taking the damage buff along with it. So, if you must use a Switch, wait until the end of the Union so that you can make the most of it.

Hopefully this helps you out of some really tough spots. Have you been putting Switch to good use? Let us know in the comments below.