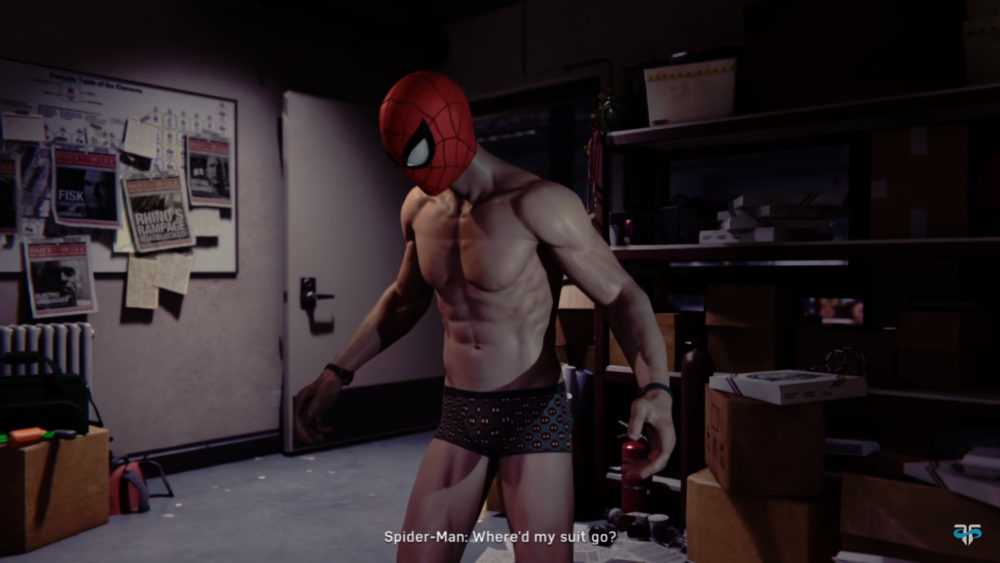 Insomniac’s new Spider-Man game has fans hyped and for good reason: There are 27 different costumes, with some pretty interesting and useful abilities. Let’s see which ones are the most useful for you.

Obviously, more stitches = better suit. We jest, we have no idea how many stitches are in these costumes, but either way, let’s run through our favorites.

This is probably the costume that least looks like Spider-Man in the game. It’s cute because it’s a throwback to the early days of Spidey’s career, but it just doesn’t look as appealing as any other suit on this list.

21. Classic Suit (Repaired) – Leap into the air and web everything in sight

13. Noir Suit – Enemies no longer call for backup when alerted

12. Stark Suit – Call in a Spider-Bro to temporarily aid in combat

11. Stealth (Big Time) Suit – Create a distortion field that can obscure you from non-alerted enemies’ vision

8. Wrestler Suit – Web Throw enemies without having to web them up

4. Last Stand Suit – Enemies cannot block or interrupt your attacks, even if they have shields

3. Undies Suit – Everyone goes down in one hit, including you

Obviously, more stitches = better suit. We jest, we have no idea how many stitches are in these costumes, but either way, let's run through our favorites. This is probably the costume that least looks like Spider-Man in the game. It's cute because it's a throwback to the early days of Spidey's career, but it just doesn't look as appealing as any other suit on this list.

Again, a nice nod to the early days, but oh man is this an eye-sore. It does have some vibrant colors, and that gives it a slight advantage over the last suit.

This costume is totally interesting, but it resembles an alien or something from the ocean rather than our favorite wall crawler. Maybe it's doing its job by being uncomfortable to look at.

While this isn't the most visually interesting, it's just strange enough to stand out against the other suits. A dark, gritty version of Spider-Man is reason to be excited.

Here's when the costumes start to get really interesting. The electrical-looking lines and the contrast between the logo and rest of the suit make this one pop. If only the eyes didn't look so goofy.

Yet another dark suit - This one is pretty rad. The layered parts give it an intriguing look, but the yellow on black really make this stand out. With a name like, "Anti-Ock", it's gotta be awesome.

The Scarlet suit has grown in popularity recently and become almost iconic. It's definitely a weird costume, but something about it is endearing. Maybe it's the bullet bracelets or the hoodie with the spider logo on it. Whatever the reason, we love this suit.

The Spider-Punk suit may be divisive, but we think it's got a great mix of silliness and unique style. It's hard not to love a punk rock version of Spidey, especially one with a jean jacket and a Mohawk.

Even the name sounds exciting. "Electrically Insulated". There is something oddly satisfying about electrifying your enemies - plus, this suit looks rad. Look at that design.

Here is an other-worldly costume that isn't uncomfortable to look at! The sleek, futuristic design with those deadly gauntlets. I wouldn't want to be in the way of someone wearing this thing.

What a rad looking suit. This game has a knack for making Spidey look like an alien - One that enemies can't see. The green on black is a nice touch, too.

The red lines mixed with the subtle blue makes for a weirdly, awesome costume. It's also great for those who want something close to the Symbiote suit, which sadly, isn't included....yet.

You'll probably find yourself rocking this bad boy, at least once. After all, it's the classic suit. What's not to love? That iconic blue and red, the clean, sleek design, and the history behind it make this costume a fan favorite.

The default costume is actually great and not boring to look at. Gotta love that white spider logo, too. Insomniac did a great job at designing their own take on the Spidey costume, and did so without it being overbearing to look at.

Wreak havoc with four articulated arms made from rapidly grown mono atomic iron alloy crystal. Okay, this one is freaking awesome. An iron suit that deploys FOUR arms to attack enemies? Could it get any cooler? It's so satisfying running around in an iron suit, especially when you have some extra arms to help you out.

Some may not like this one, but we think Spidey looks super professional in it. The leathery look of a motorcycle jacket comes to mind and the fact that he's just wearing black jeans but still looks like Spider-Man is pretty cool.

A damaged version always looks more bad-ass, right? This has all the features we know and love, but with some tears in it so we know Spidey was kicking some butt.

You might have to suspend your disbelief for this costume, even more so than you already are while playing a game about a web slinging man. The design of this suit is unique - We don't usually see costumes like this.

AKA the Spider-Man Homecoming suit. Relive your favorite moments from the movie. It's a simple design, but just knowing it's from the beloved movie makes it exciting to wear.

Looking at this makes us want a Batman: Beyond game, because that's what it resembles. All black with that giant red logo is a tad intimidating but mostly freaking awesome.

Bullet-proof? There isn't much need for more of an explanation. If you like a more dark and gritty approach - and want to be as close to a walking tank as possible, this is the suit for you. An armored Spider-Man sounds rad, especially with that toxic yellow color.

Okay, this is a beautiful suit. Those gauntlets are scary, but the weird combination of blue and white is just so cool to look at. It resembles an aquatic version of Spider-Man.

Aside from the obvious silliness of this costume (if you can even call it that), it's an interesting idea that is so fun to play around with. It also screams, "Greg Miller", which we can definitely get behind. This one is definitely missing stitches though.

This is one of the more complex suits, in terms of design and power. It's reminiscent of the Red Hood from Arkham Knight, with the ability to deflect most bullets. A tank version of Spider-Man is made even more impressive by those shiny colors!

This suit has all the functions of being a walking bad-ass tank, but without all the extras. It's a simple design that looks almost exactly like the classic suit we've all grown so fond of. It doesn't get much better than this.

Alright, this is terrifying. Look at this thing. It's one of the most bad-ass suits on this list. Playing with this suit will surely make you feel a bit more evil, which is totally okay. Ghost Rider, anyone?

Did you expect anything else? Look at this thing. The vibrant colors, interesting contrast, and heavy comic book lines make this one the most stand-out costume on this list. It's easy to be unique when the art style is different from that of the main game and we love it for that.
Comments
Continue Reading
Related Topics:Costumes, feature, Insomniac, list, marvel, Spider-Man, Spiderman, Suits