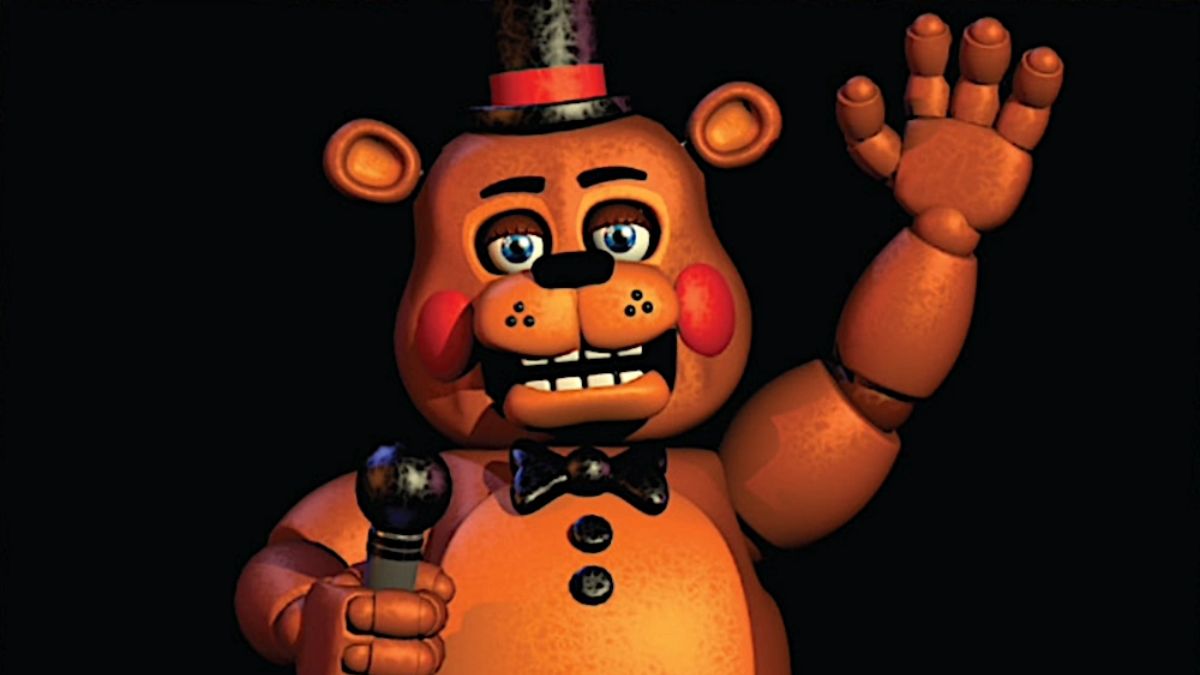 Toy Freddy is the rebrand animatronic of Freddy Fazbear and the character used in the promotional artwork for the game. Identifiable with his shiny new look and red cheeks, you’ll know to keep on the lookout for this creepy animatronic.

Five Nights at Freddy’s 2 throws out Bonnie and replaces the purple bunny with Toy Bonnie. Toy Bonnie’s appearance differs most from the three Toy designs, changing shades from lavender to blue. On top of this, Bonnie now has the circular cheeks of the other toy designs and exaggerated eyelashes.

Toy Chica is the replacement animatronic of Chica, and though her design mimics the original, there are several differences. Toy Chica has pink circular cheeks, much like the other Toy units, and her bib replaces Chica’s “Let’s eat!” phrase with “Let’s Party!”. On top of this, Toy Chica is slimmed down and much more feminine looking.

Mangle is the reimagined version of Foxy and is one of the Toy animatronics. Mangle is also the most drastic animatronic revamp, switching Foxy’s red color palette and eye patch for a white body and pink highlights. Mangle’s name is well-fitted; this poor animatronic is scrapped and heavily damaged, leaving wires and metal sticking out from its twisted body.

Balloon Boy, also known as BB, is one of the characters who debuted in FNAF 2. Balloon boy is a creepy little child-like animatronic that you’ll hear laughing and greeting you with spooky hi’s and hey’s throughout the night. He can be identified by his red and blue outfit, red cheeks, propellor hat, ballon, and sign.

JJ is a hidden animatronic in FNAF 2, appearing to be a counterpart to Balloon Boy, taking a blue and purple color scheme compared to BB’s red and blue. On rare occasions, players may encounter JJ hiding under the office desk.

The Marionette, otherwise known as the Puppet, is a new animatronic included in FNAF 2. The Marionette has a long, slender body and limbs, a mask-like face, red cheeks, and purple tear-like markings. The Marionette is the only character the Freddy Mask won’t work on, so keep your eyes peeled.

Withered Freddy is the original Freddy Fazbear animatronic from FNAF 1. After the first game’s events, Freddy’s animatronic has been scrapped and worn down, with multiple tears, loose wires, and visibly dirty fur. You definitely don’t want to catch sight of his eerie sunken eyes while on the night shift!

Poor withered Bonnie sports quite a different appearance from FNAF, missing the entire front portion of his face and left arm. Withered Bonnie’s beady red eyes are visible among the open wiring of his head, and his teeth line his open bottom jaw, creating quite the unsettling animatronic.

Withered Chica’s fur is filled and torn in several places, and her jaw is stretched, exposing her exoskeleton. Not only this, but Chica’s hands are entirely missing, leaving exposed wires. Unfortunately, due to this, poor Chica can no longer hold her cupcake.

Foxy in FNAF 1 already had quite a lot of wear and tear, and the poor pirate has only decayed further in FNAF 2. Withered Foxy’s eyepatch is lifted, revealing his right eye, and his jaw is stretched down. He’s also missing his left ear, and several limbs are missing any fur.

Golden Freddy is a rare animatronic that may appear in the game. Golden Freddy has a twisted head, blacked-out eyes, golden-tinted fur, and a blueish bowtie and hat. Be careful if you catch a glimpse of Golden Freddy because if you don’t react in time, he will force close the game.

Shadow Freddy is a dark purple bear animatronic with loose wires, a missing left ear, blacked-out sclera, and haunting white eyes. Shadow Freddy is a rare encounter in FNAF 2 with a slim chance of appearing in the parts/service room, sitting where Bonnie can usually be seen. Look out, though; if you look at Shadow Freddy for too long, he’ll force exit the game.

RWQFSFASXC, also known as Shadow Bonnie, or RXQ, is a bunny animatronic and a hidden character in FNAF 2. RXQ is a dark, shadow-like animatronic with glowing white eyes and teeth. RXQ is extremely rare, with a one-in-a-million chance of him appearing on the left side of the Office.

While you won’t see Fredbear in FNAF 2, he is first mentioned in this game as the original mascot of Fredbear’s Family Diner, and the cause of the Bite of 1983. Fredbear is a yellow/gold animatronic with black sclera, white eyes, and a purple bowtie and hat.

You won’t see Jeremy Fitzgerald during FNAF 2, but he just so happens to be the night shift worker that you’ll play as. Upon completing the game and finishing his shift, you’ll receive Jeremy’s paycheck from Fazbear Entertainment.

Fritz Smith is the night guard playable on the seventh custom night of FNAF 2. While he works in the time following the events of Jeremy’s shift, it’s speculated that Jeremy and Frtiz are the same characters using different aliases. At the end of night seven, Fritz is given a pink slip and fired for tampering with animatronics.

William Afton, more commonly known as Purple Guy, is the primary anatogist of the FNAF series. Purple Guy is the character responsible for designing the animatronics and having them hunt down and kill small children. In FNAF 2, he appears as a purple, shadow-like figure in arcade-style pixel minigames that slowly unravel his story.