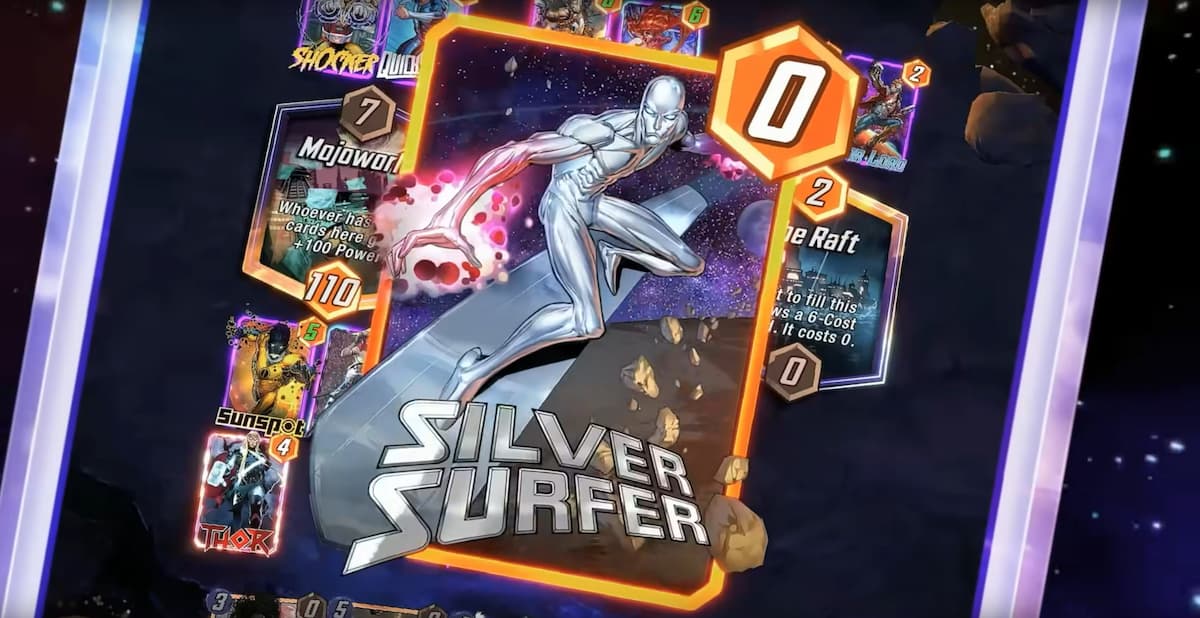 The Power Cosmic season brought a new card to Marvel Snap: the Silver Surfer himself. As a 3-cost, 0-power card, he might seem a bit underwhelming. He’s certainly not as immediately impactful as last season’s Black Panther, but once you learn how to properly utilize his effect, the results can be pretty awesome. Here are the best Silver Surfer decks you can build in Marvel Snap.

First off, let’s go over Silver Surfer’s ability. He has an On Reveal ability that gives your other 3-cost cards +3 Power. Do note that this only applies to cards that you already have on the board. The ability can then be re-triggered with cards like Odin and Absorbing Man, and triggered twice with Wong.

Naturally, this makes Silver Surfer a good fit with other useful and under-statted 3-cost cards like Ironheart, Wolfsbane, Bishop, Mystique, and Rogue. Here are the best decklists for Silver Surfer across all card Series.

Series 1 and 2 On Reveal

If you’re still in Series 1 and 2, a good tempo deck can go a long way. Angela is your bread and butter here, but the main idea is to flood a location with Storm, then back it up with another 3-cost card that can be buffed by Silver Surfer later.

Your last two turns should ideally be Silver Surfer with Star-Lord, followed by Odin to trigger their abilities again for a massive power push.

This deck is designed around pretty much every useful Series 3 card in Marvel Snap, and aims to have Silver Surfer buff them all up on the final turn. Brood is definitely a high value card to add here, as Silver Surfer will be able to buff all its clones, giving you an additional 9 power for just 3 Energy.

The rest of the cards are meant to disrupt your opponent in some way, with Polaris and Juggernaut moving cards around, and of course, Cosmo killing On Reveal effects. Goose is also a strong pick here; since you’re not using any cards that are above 3-cost, you can limit what your opponent can play by using Goose and Storm.

This decklist was brewed by the folks over at the Snap.fan Discord server, and it revives the much-hated Negative Seratonin deck from three seasons ago. The great thing about this deck is that you don’t necessarily need Mister Negative to win; as long as you draw either Negative or Sera in time, you should still get a ton of value from it.

Bast sets the power of all cards in your hand to 3, which already offsets the low stats of virtually ever card in this deck, aside from Sera. You’ll also have the Iron Man and Mystique combo for a final turn power push (bonus points if they’ve been Negatived), and Silver Surfer to give everyone another push as well. Do note that Bast is a key card for this deck, and she plays extremely well with Silver Surfer. It’s probably not worth running this decklist without Bast. Early reports are already indicating that this deck is performing very well, so it’s definitely one to look out for in the coming days.

Depending on what the meta looks like, you may want to slot in Rogue over one of the other 3-cost cards instead.

If, like me, you’re still waiting for Bast to finally show up in your Token Shop, playing Silver Surfer in a Sera Miracle deck is absolutely viable as well. The obvious goal here is to buff all your 3-cost cards on the last turn with Silver Surfer, and playing Sera on turn 5 lets you drop up to three 3-cost cards on turn 6, which can be pretty nutty.

Green Goblin, Debrii, Killmonger, and Cosmo are our picks for disruption cards, and Debrii also nullifies the risk of getting surprised by an early Galactus play.