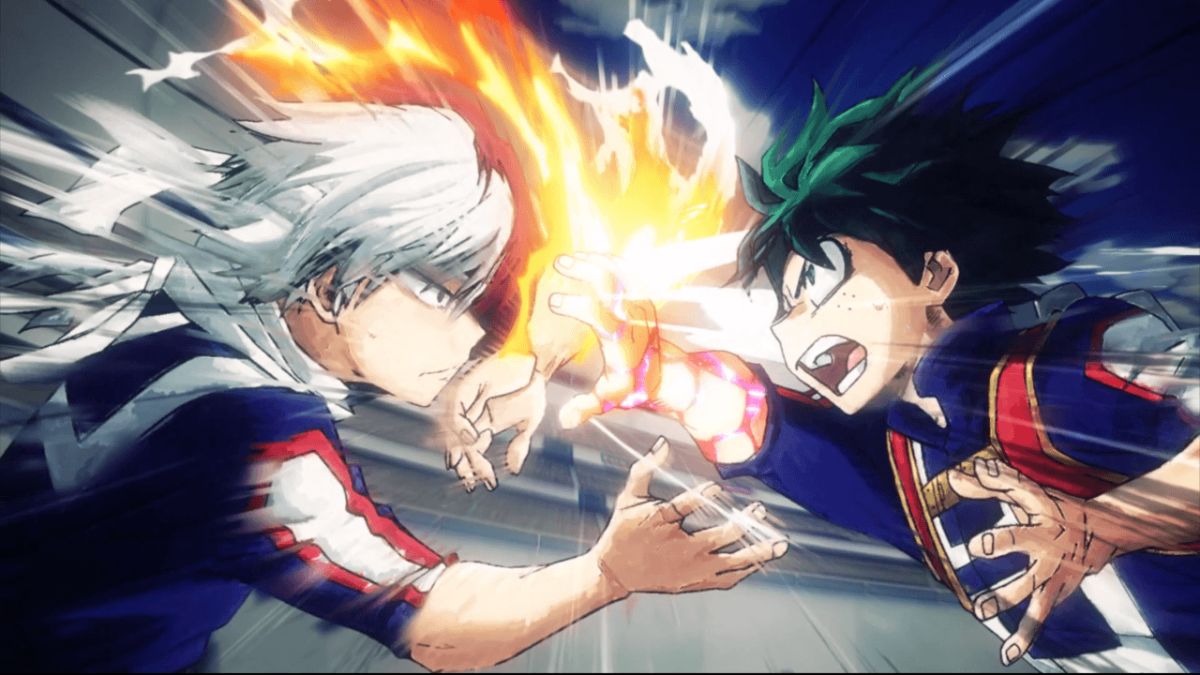 Rivalries are a core aspect of any anime series, giving the protagonist someone to butt heads with and cause conflict. However, not every rivalry is intense and fueled by anger. Many rivalries in anime are often petty sibling dynamics, and even good friends wanting to get stronger than the other. These friendly rivalries create enjoyable viewing and lighthearted competition throughout the story. So without further ado: Here are 10 of the most enjoyable friendly rivalries in anime, listed in no particular order.

While Deku usually goes up against the hot-headed Bakugo, one of the most overlooked friendly rivalries in My Hero Academia is between Deku and Todoroki.

Near the story’s beginning, Todoroki is preoccupied with pressures from his father and family and doesn’t have all that much interest in Deku. However, things took a turn in the UA Sports Tournament ark when Deku and Todoroki were pitted against each other in one of the final matchups. Through Deku’s inspirational words and encouragement, Todoroki found the courage to reclaim his Quirk as his own and reawaken his fire powers.

Ever since this moment, the two have become friends and rely on each other in several dire situations. Todoroki and Deku have undoubtedly become one another’s biggest allies, and it’s delightful to watch the friendly rivalry between the two Class 1-A students as they grow to be the best heroes possible.

Ash and Gary have had a notorious rivalry since the very first episode of the Pokemon anime.

Throughout the story, Gary is often seen being rude and rubbing his progress in Ash’s face, while Ash continuously gets worked up and frustrated as a result. However, after losing to Ash in the first round of the Silver League Conference, the two eventually become friends again.

As the series goes on, Ash and Gary maintain a competitive rivalry minus the hostility. The two stay in touch throughout the Generations, have respect for one another, and even go to each other for advice or help on more than one occasion, making their rivalry one of the most satisfying transformations and enjoyable dynamics to watch.

Shinra and Arthur have a hilarious rivalry throughout the story of Fire Force.

Starting as enemies with a hatred for one another at the Academy, Shinra and Arthur soon have to learn to work together when they’re both placed onto Squad 8. Quickly learning to adapt and get along, Shinra and Arthur establish a somewhat sibling-like relationship, showing they care about each other. Despite this, they constantly irritate one another to the point where they want to tear the other’s heads off, creating quite the disruption for their other squadmates.

Despite the frustration they feel for one another at times, Shinra and Arthur are reliable allies who both strive to achieve their goals and push each other toward their goals. They also have some hilarious moments together and light-hearted tensions that create an engaging and entertaining dynamic, making them one of the most enjoyable rivalries to witness on screen.

Soul and Black Star have a great relationship in Soul Eater, filling the role of each other’s best friend. On top of this, they’re passionate rivals, aiming to best one another and achieve their goals in over-competitive feuds.

Though they act as direct rivals to one another, Soul and Black Star have several differences that make them such interesting competitors. While Soul is a weapon with a dream of achieving the title of Death Weapon, Black Star is a Meister and assassin who longs to be in the spotlight. Between the entire group of friends at Deathweapon Meister Academy, Soul and Black star bicker the most but also hype each other up and support one another just as much.

There are even a number of hilarious scenarios where they dramatically run into one another’s arms for a hug, goofing off and acting like they share a single brain cell between them. Trust me; there’s no way you won’t love this rivalry.

Nagisa and Karma are two classmates in Korosensei’s class 3-E, tasked with assassinating the teacher before he destroys the world. Karma and Nagisa were childhood friends before the show’s events and continued their friendship as close friends during their time in Class 3-E.

Despite their close relationship, Nagisa and Karma grow to have quite the rivalry during their time spent together as Korosensei’s students. This rivalry takes a dramatic turn when the students begin arguing over whether Kurosensei should be killed or saved, with Korosensei splitting them into teams to settle the matter with a paintball game.

With Karma and Nagisa on opposite sides of the game, they go head-to-head in a wild clash of opinions, bringing a dramatic rivalry to the screen as they fight for the success of their beliefs. This makes their rivalry one of the most competitive and engaging dynamics to watch unfold, and it’s almost impossible to want to cheer for one of them over the other. They’re both so different, but so damn lovable together.

Kakashi Hatake and Might Guy are both fellow Sensei of the Hidden Leaf and some of the most powerful ninja within the village. Kakashi and Guy are comrades who have grown up with one another and thus established a strong bond and trust in one another.

While Kakashi and Guy have vital leadership roles most of the time in Naruto and are responsible individuals, they still carry a streak of childhood competitiveness. This means they’re always challenging one another and finding friendly competitive entertainment in their dangerous lives as Shinobi.

Seeing such an otherwise relaxed and serious character as Kakashi let loose and take on the cheery, optimistic, and competitive Might Guy is always a highlight, especially with the exaggerated movements and friendly dramatic antics that follow their challenges. You won’t be able to help yourself from laughing at the chaos of their little clashes.

Shōyō Hinata and Tobio Kageyama from Haikyuu!! have one of the most notorious yet enjoyable rivalries in anime.

After star player Kageyama leaves Hinata and his Middle School Volleyball team with a crushing defeat, Hinata swears to grow strong in high school so he can rematch the infamous King of the Court and defeat him. Unfortunately for both Hinata and Kageyama, they’re left in shock when they arrive at Karasuno Volleyball Club to discover they’re both attending the same school and will be First Year teammates on the same team.

They initially argue and butt heads, still feuding over the notorious middle school volleyball match that started it all. However, they eventually accept reality and learn to work together. As a result, they become two of the most unpredictable players on the court and are well-known for their freakishly skillful Quick Attack.

Hinata and Kageyama are the perfect rivals-to-teammates dynamic and make one hell of a storyline. If you’re looking for the ideal sports rivalry, you’ll want to give Haikyuu!! a chance.

Asta and Yuno are known to have one of the healthiest rivalries in anime, and what makes this dynamic so special is that despite being so different, Asta and Yuno respect and understand each other.

This is seen in every aspect of their personalities. Asta is magicless and outgoing, while Yuno has tremendous power and is rather introverted. While they are opposites of one another, they are brought together by a common goal: Their dream to become Wizard King.

Asta and Yuno challenge each other to be the best and believe in one another’s strengths. Their reasons for wanting to be the Wizard King are also different from one another, but they are both equally committed to achieving this dream. You can’t help but love the rivalry Asta and Yuno share, and it truly makes the story of Black Clover that much more enjoyable.

The clash of personalities between Goku and Vegeta creates one of the best friendly anime rivalries of all time.

The rivalry between the two is undeniable, with the two being complete opposites. While Goku grew up in relative peace, Vegeta grew up as the Prince of the Saiyans, a complete contrast in background.

These clashing backgrounds led to constant competition between Goku and Vegeta, with their wanting to be stronger than the other working as a motivator for both individuals to train in tandem. It slowly causes the two to transition from enemies to allies, and brings a satisfying friendly element to their dynamic. Both share a love for fighting and a drive to grow stronger, and while they still bicker constantly, they both learn from one another and grow as individuals together.

Ultimately, throughout their competitions, Goku and Vegeta not only become stronger and push one another to new limits but also grow their perspectives on each other, earning newfound respect.

Gon and Killua are two twelve-year-old boys that meet in the stamina race of the Hunter Exam, where they grow into fast friends due to being the only participants of the same age.

Though Killua and Gon establish a bond almost immediately, they regularly decide to compete against one another. This tests their friendship on numerous occasions throughout the series as the boys both work toward their goals of becoming Hunters. Gon’s friendly and outgoing personality perfectly contrasts with Killua’s reserved and avoidant persona, which results in the boys complementing each other as a duo in many ways.

The two have a brotherly relationship too, full of competitiveness and bickering. This friendship is one of the best parts of the Hunter X Hunter series, and you’ll soon find yourself unable to resist cheering this duo on throughout their journey to become Hunters.

That’s it for the 10 most enjoyable friendly rivalries in anime. For more news, guides, lists, and quizzes to cover all of your entertainment needs, check out the rest of our content here at Twinfinite. We have a large range of topics suited to any anime fan, such as ranking the top 10 best tall anime characters, every One For All quirk in My Hero Academia explained, and top 20 most popular anime of all time.