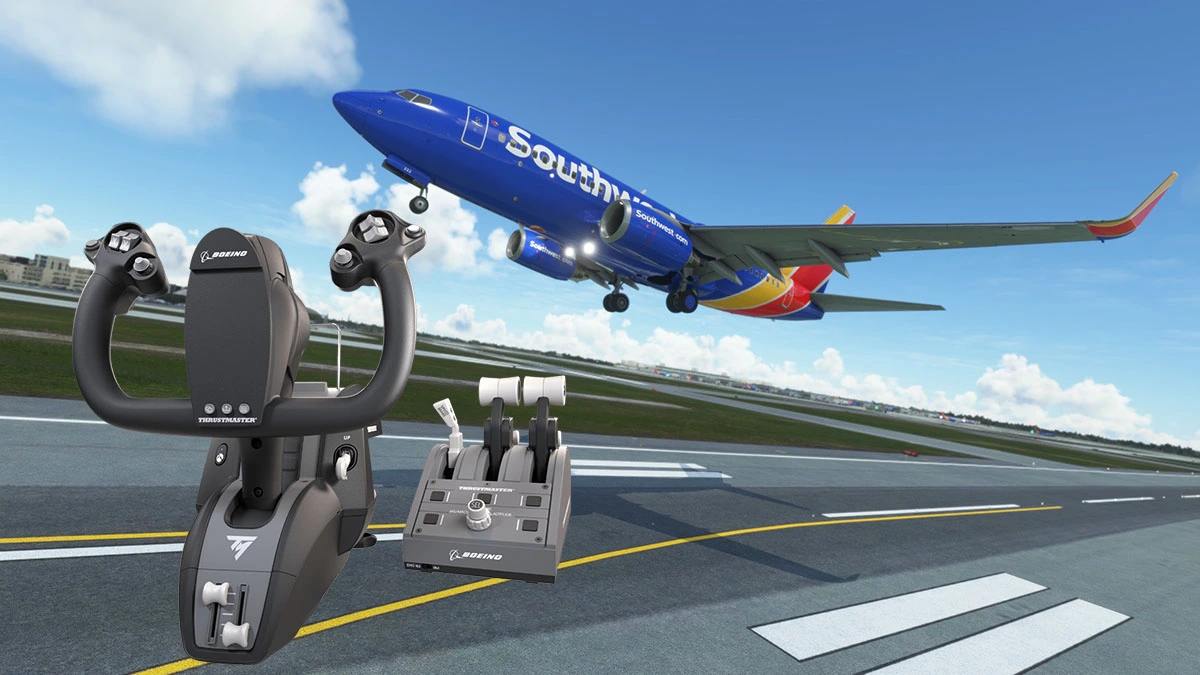 Microsoft Flight Simulator is a whole simulation platform more than a stand-alone game, which means that for many it’s an actual hobby in its own right.

As a consequence, it comes with plenty of dedicated hardware and an absolute metric ton of add-ons between aircraft, airports, scenery, and utilities.

A relevant issue is that the possibilities are so many and so diverse that the market is an absolute jungle. If you want to find a good gift for a friend or a loved one, and you’re not a flight simulation expert yourself, you may be in serious trouble without guidance.

To help you out, here are 10 gift ideas for your favorite virtual pilot, in no particular order. All of them are very valid options, depending on what they may personally enjoy.

Airbus A320 by Fenix

The Airbus A320 is one of the most popular airliners in operation, and this rendition by Fenix is absolutely fantastic, in the running for the absolute best third-party aircraft available for Microsoft Flight Simulator, as you can read in our review.

Despite the fact that it provides a very advanced level of simulation, the very nature of the automation included in the Airbus A320 makes it the ideal candidate for someone who wants to approach high-level airliner simulation. The system takes care of a lot of the functions you’d have to handle manually in other airliners, making this a great entry point for learners.

It’s available exclusively on the developer’s store for £49.99. Unfortunately, if your friend or loved one plays exclusively on Xbox, this is not an option. It’s PC only and it will be for the foreseeable future.

The Boeing 737 series by PMDG is another very strong contender for the best airliner available in the sim. It comes with a similar level of advanced simulation as the previous entry, but unlike the Airbus, its systems are less automated, making it more of a “pilot’s aircraft” and a very good choice for someone who wants to learn not only how to handle a modern airliner’s systems, but also its piloting techniques, and for advanced simmers who already know well what they’re doing.

The 800 is by far the most popular in the real world, which means that it’s a good choice if the recipient of the gift likes to simulate real airline operations. The 600’s affordability makes it a fantastic choice if that’s your price range, but not many actually fly in the real world. That being said, its systems are basically identical to its bigger brothers, albeit it lacks the business jet and cargo variants. Yet, if your friend wants to try an advanced and complex airliner and you don’t want to spend an arm and a leg, you can’t go wrong with it.

The Eurofighter Typhoon is one of the best military fighters available for Microsoft Flight Simulator. While it’s advanced enough, it’s more balanced than the previous two entries between simulation and entertainment. It’s also a very, very fun aircraft to fly if the recipient of your gift is into military jets.

It’s available both on PC (via the Just Flight store and the official marketplace) and Xbox for $29.99.

It’s worth mentioning that the version sold on Just Flight is the only one that comes with cosmetic weaponry, as that’s not allowed by the policies of the official marketplace for some reason that will forever remain incomprehensible.

The Kodiak 100 is likely one of the best general aviation aircraft available for Microsoft Flight Simulator, if not the best at the moment.

Being suitable for both passenger and cargo transport, and equipped for pretty much any kind of airfield, it’s a very good choice for any friend or loved one who enjoys exploring the world on a smaller aircraft, from Lukla in the Himalayas to the jungle strips of New Guinea.

It’s available for PC on the developer’s own store or Orbx Direct starting at €29.99, but you can also find it on the official marketplace including an Xbox version. A variant with floats is also available, for those who prefer taking off and landing on water.

Navigraph has become a nearly essential tool for hardcore flight simmers. Being a subscription service, you can either get it for your friend or loved one, or perhaps help them extend their existing subscription.

It offers navigation data and charts from well-known professional provider Jeppesen, which are basically life changers for those who want to bring their simulation experience to the next level.

It starts from €8.30 for a month or €74.90 for a full year for the Navigaph Unlimited subscription. You can find it on the official website. While some of its software features are not available for Xbox, the charts are definitely useful regardless of platform, even if they require a device like a tablet, PC, or smartphone to display.

If you’d rather go physical with your gift, and you have a sizable budget, you can’t go wrong with this Yoke by Thrustmaster, as you can read in our review.

It’s extremely solid, precise, and great for those who like to fly Boeing aircraft or any aircraft controlled with a yoke in general.

Its full metal structure under the hood makes it very durable, and it comes with a unique tilt pedestal that recreates the sensation felt on the flight deck of a Boeing aircraft, which is missing on other yokes that have a more traditional tabletop mount.

It works for both PC and Xbox, and if you really want to splurge you can also add a set of rudder pedals (Thrustmaster’s own TFRP Rudder is the perfect complement for $129.99), to give your recipient everything they need for a full-fledged control solution.

If the recipient of your gift is more into Airbus aircraft, they may prefer the TCA Captain Pack X Airbus Edition, which comes with a sidestick instead of a Yoke.

This one is brand new, being the second iteration of a previously-released PC-only version with the addition of Xbox compatibility.

Having a stick instead of a yoke, it’s perhaps a bit more flexible than the Boeing version, as sticks are fine for basically every aircraft, even those controlled with yokes in the real world. On the other hand, yokes are not very viable for most military jets.

Additional value is provided by the fact that this stick is fully ambidextrous thanks to the (included) swappable parts, which also means you can simulate both pilot and first officer controls, which on Airbus aircraft have their sidesticks on the left and on the right respectively.

It’s priced at $299.99 for the full set with stick and throttle quadrant, while the stick on its own is priced at $119.99, and it comes with the usual small throttle slider.

Like with the Boeing one, you can add a set of rudder pedals if you have a bigger budget.

Tehcnobrain’s rendition of Kansai Airport in Japan wasn’t 100% perfect when it launched, but the developer has taken the feedback onboard and has updated it considerably.

This is a textbook case in which a developer has embraced the feedback it received and turned a good release into an exceptional airport, arguably one of the best available for Microsoft Flight Simulator.

Not only it looks good, but it’s a great way to explore Japan, which is one of the best places to fly in the sim, supporting domestic and international passenger flights, helicopters, and cargo operations.

Aerosoft’s Brussels Airport comes with top-notch quality thanks to the fact that it was created by Jo Erlend Sund, a superstar designer who is well-known for the stunning level of detail of his airports. Even if Brussels isn’t your choice, if you find another airport by Jo, you simply can’t go wrong with his work.

Suitable for both airline and cargo operations, Brussels is located in the heart of Europe, which means that the recipient of your gift will have plenty of destinations available to simulate real-world airline operations.

It even comes with Aerosoft’s functional VDGS system to guide airliners precisely to the gates, which is an additional bonus.

It’s available at Aerosoft’s own store and Orbx Direct for $21.65.

Closing our showcase, we go to the United States with another major hub, Los Angeles Airport by iniBuilds.

This one was released recently and it’s another top-notch airport added to the lineup of Microsoft Flight Simulator. It’s big, beautiful, and located in one of the busiest airspaces in the world, providing an additional level of challenge for airline operations. Modeling and textures are both great, and it comes with functional VDGS.

iniBuilds also created a free Venice Beach add-on to add even more eyecandy around the airport, which never hurts. 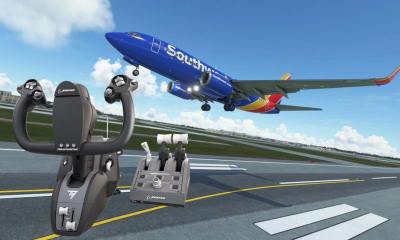 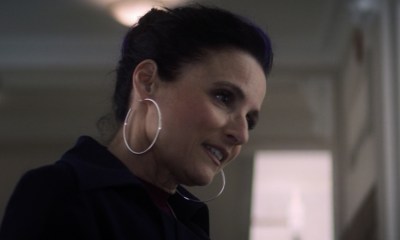 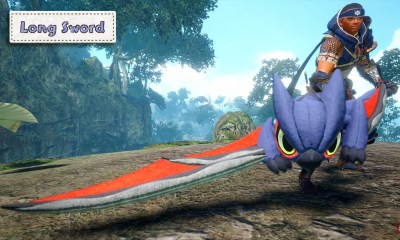