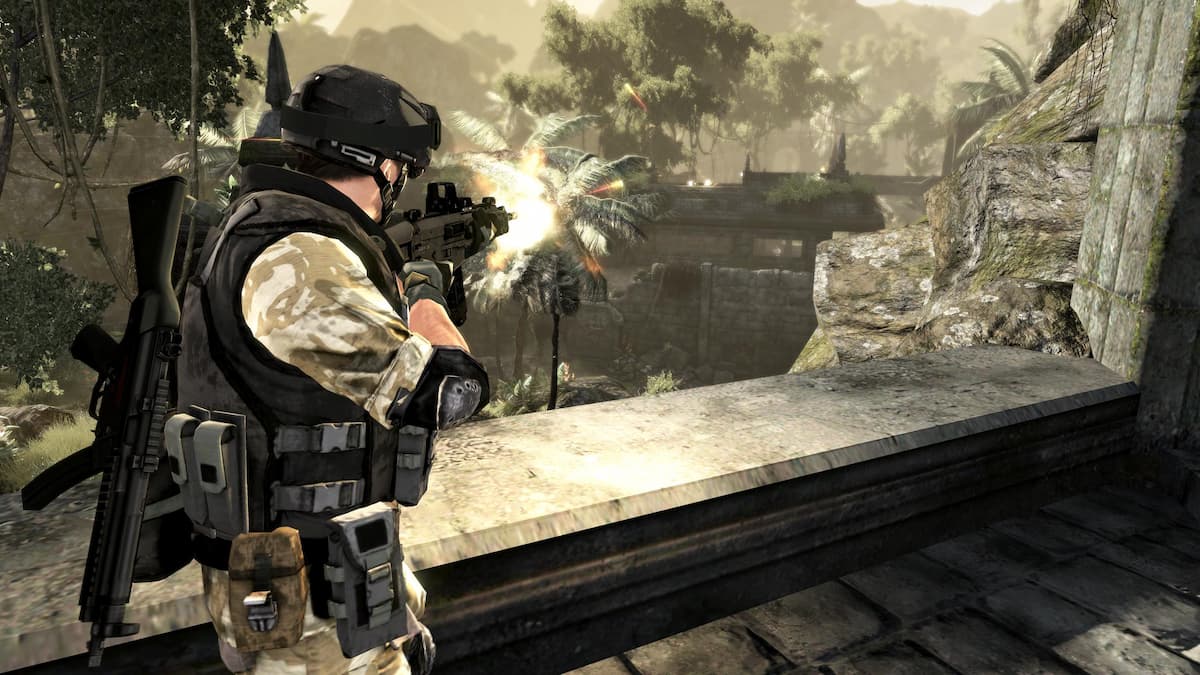 Call of Duty Modern Warfare 2 is in the middle of its multiplayer beta, giving fans a playable slice of what they can expect when the game launches at the end of October. The future of the series is looking to be trending toward a realistic military simulator as gameplay refinements like the expansion of the Gunsmith to insane amounts of customization and various other little details back up that sentiment. However, the addition of one game mode has enthralled the playerbase and has seen the series hold onto its arcade-esque roots.

That’s right, the new, or returning, third-person mode has been a surprisingly delightful addition that shakes up the core FPS gameplay loop CoD has had a stronghold on for many years. Veterans of the series may remember the third-person mode from 2009’s Modern Warfare 2, and this year’s CoD is looking to reintegrate this into this year’s title. It’s been a ton of fun watching your soldier run around corners and switch between first to third-person in the traditional CoD game modes. Experiencing this mode has been a refreshing take, and during battle, I can’t help but think to myself: “Where’s SOCOM?”

You’re probably wondering why such a random thought has floated through my mind, and I feel like Call of Duty is the majority of the answer. Despite the ever-shifting setting that CoD has taken players through, the return to a modern setting always creates a sense of nostalgia or yearning for something more. Call of Duty has seen its highest peaks during modern settings, and the fact that no other title has managed to successfully recreate a modern title to challenge CoD has been shocking, to say the least.

Now, the previous statement isn’t meant to ignite a war zone or pit titles against each other. Call of Duty has always been an arcade-style shooter, yet the transition to a more realistic military simulator has breathed some new life into a series that’s been around since 2003. However, seeing all the new, and more authentic, military-inspired ideas come to this year’s iteration of a series that’s been the king of arcade-style shooter left me conflicted.

Imagine if we could get this in a game that’s historically been known for its realism and competitive gameplay? One could argue that PC has plenty of those games, and while that’s correct, there’s nothing like that on console.

SOCOM used to be a storied series of games that grew a dedicated fanbase. The SOCOM games closely followed the stories of United States Navy Seals in their journey to combat enemy forces across the globe in a variety of missions. The games were played in third-person and featured a little more depth than you’d expect as you were tasked with taking the reins of a commanding officer in the field that would issue commands to their team to complete their missions. Imagine Ghost Recon and Tom Clancy’s Rainbow Six in a more grounded setting, only for the PlayStation console with a heavy emphasis on realism and tactics.

The story component of these games was serviceable, to say the least, but what elevated SOCOM to higher levels was the fact that it was the first of its kind to feature a multiplayer component. Multiplayer doesn’t seem like that big of a deal until you realize this was back in 2002, and to play online, you had to purchase a Network Adaptor. Once you had your Network Adaptor, SOCOM boasted a solid multiplayer experience as you could play various game modes such as Team Deathmatch and Search and Destroy. It sounds common place, but this was revolutionary at the time. It was made to appeal to a much more hardcore player base, and that desire for a harder, competitive experience has risen significantly over the years.

As popular as these games became, it all came to a crashing halt when SOCOM 4 was the last entry in the series back in 2011 for the PS3. It doesn’t help that in 2011, Sony experienced a massive hacker attack that crippled the network and shut down multiplayer services for an extended period. Developer Zipper Interactive went on to work on the massively multiplayer game MAG, until the studio was shut down in 2012. Since then, we have seen the rise of similarly-minded titles like Tom Clancy’s Rainbow Six Siege while being left in the cold with SOCOM going dormant for almost 11 years.

As with any series that falls off the face of the planet, the rumor mill has been turning as fans want to see SOCOM come back to life. The latest rumor surfaced a few years ago when a notorious leaker pointed to Guerrilla Games working on a multiplayer version of the third-person shooter. While it has yet to be confirmed since then, it would only make sense to have the shooter come back.

Since 2013’s Killzone: Shadow Fall, Sony has been somewhat allergic when it comes to committing to multiplayer experiences. We saw the rise and fall of the Resistance series quicker than you could spell resistance, and Killzone made splashes until it suddenly vanished after Shadow Fall. However, in recent times, Sony has seemingly changed that mindset and has plans for up to 10 live service titles to hit its platform by 2026 after seeing Halo creator, Bungie, join the PS family. While the idea of SOCOM coming back in a live service capacity is nerve-racking, plenty of live service games have released and seen proper management, giving fans hope for a victorious return to form.

If we sit down and think of a modern SOCOM game, all of the enhancements the shooter genre has experienced could work wonders with a title of this storied history. The core gameplay loop could be epic on so many levels if a team gets behind it that has paid attention to how the industry has evolved. For example, imagine a single-player experience on par with the open-world design of the Sniper Elite series, full of smaller objectives while tasking you to lead your team on a successful outing. The single-player experience could include harder difficulties such as “permadeath” to challenge the toughest players.

Conversely, if we consider multiplayer and co-op, there are tons of ideas from the industry that could make this a worthwhile experience. The co-op portion could task you and a group with completing various objectives a ‘la Spec-Ops mode from the older Call of Duty titles. The multiplayer experience could thrive on retaining the hardcore gameplay while introducing ranked play and various gameplay upgrades like deeply customizable weapons that feel personal to you while introducing new modes or refining modes from the past. A SOCOM revival doesn’t have to do something wildly new or exciting; it just has to retain its core identity and reinvigorate it with new ideas.

With Sony and Xbox in a war over Call of Duty, SOCOM could be primed to make a return to fill the gap should Call of Duty cease to hit PlayStation consoles. While losing Call of Duty would certainly sting, a return to the tactics-based SOCOM series could ease the pain and usher in a new era of multiplayer gaming for PS users.