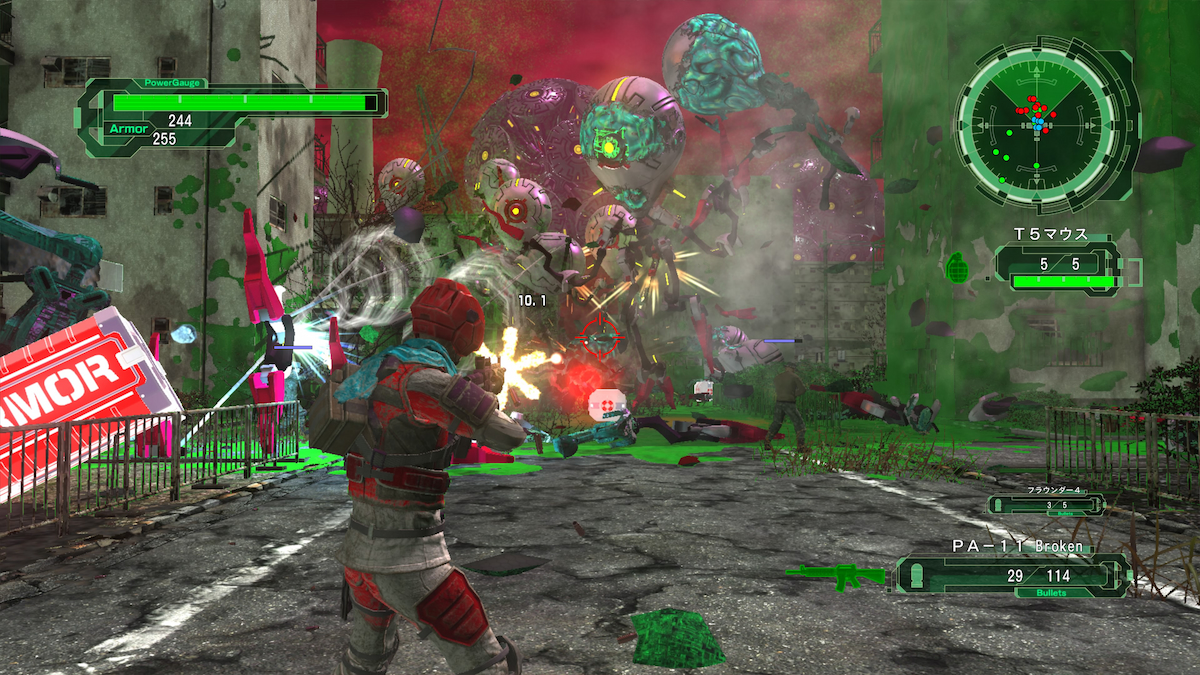 On the surface, the Earth Defense Force games look like nothing more than a third-person shooter where your main goal is to defeat hordes of giant bugs – though there are certainly way more enemy types than that by now.

Yet, anyone who has given the series enough time knows that the games are like the best parts of the cheesy B-movie genre brought to life. It’s like getting to live the plot of Starship Troopers. Earth Defense Force 6 is another great example of this and is so good that I imported it all the way over from Japan.

For a little background, I have been playing this series since sometime in the late 2000s with Earth Defense Force 2017. When Earth Defense Force 5 was released in Japan in 2017 (some funny title/release coincidence), I took a shot and imported it through Play-Asia.

I learned something about the games at that point, which prompted me to happily import Earth Defense Force 6 when it was released in late August this year, and it’s something I think you may want to do as well.

Earth Defense Force 6 arrived, and as expected, there’s an exceptionally low amount of English to be found, and none of it is in any part of the story. The menus are the same layout as Earth Defense Force 5, so they are easy to navigate.

As crazy as it sounds, the language barrier is something considered a monumental boon for this game and the whole reason for this piece. That’s right: I am arguing on behalf of not understanding the game, making it all that much better.

Earth Defense Force games feature a massive amount of weapons, and not all of them are something to reasonably use. There’s a lot of gag weaponry and things you only think are upgrades before testing them. But that’s the point.

Not knowing what you are getting makes this game a million times better. You know this is an assault rifle, sure, but you wouldn’t know before taking it into a mission that the bullets double as timed explosives after impact. That’s a shotgun, but you only know it does amazing damage; however, it does it in one big slug shot that looks like an energy ball.

The point is this means you have to experiment. You can’t just eyeball a weapon and know for sure it’s not going to help. Instead, you have to bring it out to the field with you and either learn to use it in the mission you chose or retreat and keep in mind it’s really not all that great.

This pattern absolutely means that collecting weapons is way more meaningful, as for the most part, you are going to use more varied weapons than you ever would if the game told you it’s likely trash. The nicest thing about Earth Defense Force 6 is that damage numbers are now a thing, so you don’t have to actually know any of the stats of a weapon before you take it out; everything can be determined by field use.

I still believe that enjoying the whole game with zero understanding is the right move, as the gameplay is easy enough to understand that you don’t actually need any sort of story context to progress. Honestly, while the story and dialogue are so perfectly campy when you can actually understand them, the game still works unbelievably well with the language barrier.

In this situation, you are being led practically blind without any idea what a new enemy might be or even upcoming locations. This not only ups any tension, but it makes the wacky new enemies or surprise reveals feel even more impactful as there is no way to know beforehand or truly grasp what they mean. There’s so much trickery to the story this time around I enjoyed crafting my own theory for what was going on, likely more than when I will eventually get to play the English release and actually understand.

While this whole piece probably means much more to those who are already fans of the series, I wholeheartedly believe Earth Defense Force to be a series for absolutely anyone and everyone. No shred of me thinks the game should be imported purely because of impatience.

While that is a reasonable position, I think there is something much more to be gained in playing Earth Defense Force 6 this way. Sincerely, if you want a closer connection with the game, as crazy as that sounds, you really should look into playing it while you can’t understand a single thing that is going on.