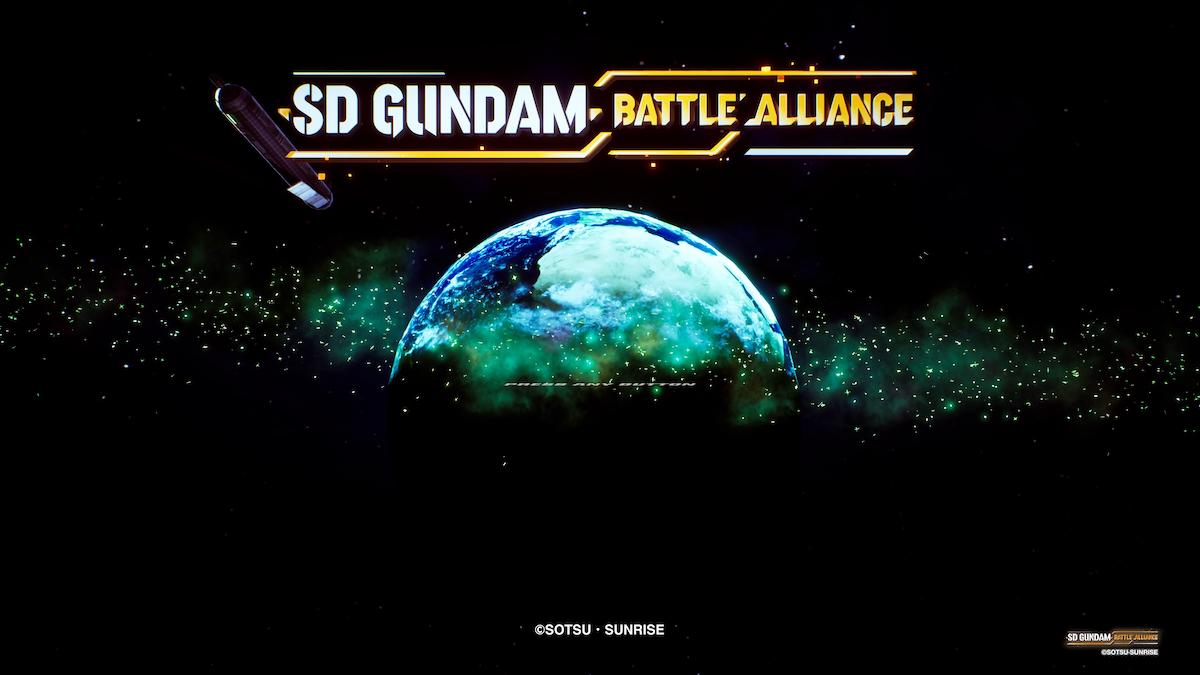 It’s tough to beat a Gundam game in terms of what they bring to the table. The pure joy of watching two robots fight is simply awe-inspiring and surely something we all mimed with toys at some point. From top to bottom, SD Gundam Battle Alliance feels like a love letter to longtime fans of the anime, as you essentially play a Gundam historian. However, those with only cursory knowledge of the story may find the narrative of the game to be incredibly convoluted.

You play as an unseen commander who is plucked off of the battlefield along with your Warrant Officer, Juno. You find yourself in a digital space wherein an AI keeps tabs on Gundam history. The only problem is that breaks keep happening in the directories that clash with canon history and you must correct the inconsistencies. Most of the story scenes take place as visual novel segments.

Each directory is a different piece of the Gundam story as a whole and many iconic characters are met, along with their Gundam. This is just about where the need to follow the story ends. I am one of those with only a cursory knowledge of the overarching Gundam story and I found myself getting information overload several times.

The other issue with the story is that it still plays out during missions, at the bottom of the screen. There is always dialogue going but very rarely is there time to stop and pay attention to what is being said, especially during combat where it’s incredibly easy to get completely wrecked if you take your eye off the proverbial ball.

The gameplay is where all reasons to pick up and play SD Gundam Battle Alliance can be found. Combat is the expected hack and slash and shoot that can be expected of the action-oriented Gundam games. I’m not meaning the button-mashing part of typical hack and slash combat is where this game shines, it’s the feel of the combat. Every Gundam gets a melee and ranged attack, as well as two sub-skills that provide extra firepower.

There are 62 suits that I came in contact with and every single one that I tried in my initial playthrough (a small piece of that 62) felt unique. From quicker melee attacks to heavier hits that feel like swinging a Warhammer, every suit I tried was a new experience and provided a fun bit of rhythm in learning to utilize the Gundam properly.

There are three classes that each Gundam falls into. There’s Sharpshooter for range-focused combat, All-Rounder for a balanced class, and Infighter for melee-heavy.

There are two types of missions that all play out roughly the same way. The Break missions involve righting some, well, breaks, in the Gundam history. Then there are True missions where you get to see how that same piece of history from the Break mission should actually go. The game offers a normal and easy difficulty from the start that can be changed before a mission. At a point early on in the game, I hit a difficulty spike and swapped to the easy to see what was different, but I couldn’t tell anything was. I got just as messed up on easy as I had on normal, it felt like.

With either, you start out and navigate through a lot of normal fodder Gundam that you can easily bypass if you wanted. But, they are a good source of the Capital currency that is needed to update the player’s Gundam so on later missions they are worth fighting throughout.

The missions then proceed to end in fighting at least one special Gundam enemy that is much stronger and takes more effort to beat. Due to this, I stuck with an Infighter class Gundam nearly the whole game just to gain an edge.

Upgrading a Gundam is incredibly simple, basically moving a slider in one of four stat groups: HP, Boost, Melee, and Ranged. Three are very self-explanatory as far as what they correspond to and increase. Boost, on the other hand, serves as a stamina bar that is drained by both combat and flight traversal.

The nicest thing about upgrading is that you can respec and rearrange stats for any Gundam whenever you want. Once you have whatever stats paid for and locked in, you can rearrange them in a way that fits. This gives you the chance to spec into being more ranged if a fight needs it or more melee to hit harder.

All of these upgrades result in an actual level, though it’s more a marker of stat progression than anything. Missions all have a suggested level when you get the opportunity to take them on. I learned very early that the suggested level is more of a requirement, after getting totaled for not upgrading when I should have been.

The biggest difference in each Gundam is the number of usable medkits. These items heal you, but there is only a limited number of uses per Gundam. The one I picked had only three and I often felt exactly how much that limited me when I would be focused by an especially tough boss, my HP draining entirely too quickly for the medkits to matter.

If you run out of medkits, you can’t bring yourself back up from 0 HP. If you and your partners all get knocked out, the mission ends in failure. While available, the medkits can be used after getting knocked down, but at the penalty of healing far less HP.

New Gundam types are acquired by getting blueprints through missions. These are typically dropped by the ace enemies. Each Gundam requires a specific number of blueprints to be built. The further you get into the game, the more blueprints it takes along with tiers that require finding them across different missions. The game claims you can find blueprints in chests, but I don’t think I ever did playing on easy and normal. Maybe that’s only on the higher difficulty.

While the missions themselves are somewhat uniform, the maps they take place on are enjoyable. They aren’t too large to become bothersome or too small to feel like you’re being led by the hand. The later missions also had some level of puzzle and maze to the maps, which was a nice distraction from just getting from Point A to Point B. Chests are worth whatever detour they require, as well.

The game also made one terrible choice when it came to missions: you can’t pause, even when just playing alone. Considering the 30-minute time limit of each mission, the lack of a pause function feels like an oversight, as if the game is truly only meant to be played in co-op where not being able to pause would make sense. Despite that 30 minutes, missions take half of that tops, and that’s on a more involved map.

I never got the chance to try the co-op. When going through the game I would check the lobbies periodically, but the one or two available were always full of players who were much higher level than me and would kick me out for trying to join in their reindeer games.

I never was bothered about playing solo. This was because when solo you get to pick your partners and, in some cases, even the Gundam they pilot. The partners never felt like they were going to powerhouse an enemy, but they were often what kept me from a full wipe with one partner drawing aggro while the other revived me. There wasn’t any sort of programming, so it wasn’t uncommon that the partner being targeted would be the one trying to pick me up, and I could only helplessly watch them get kicked out of the revive over and over. Missions typically give story-related AI to assist, and in these instances, they would typically grab the enemy’s attention.

There appears to be a way to import your own MP3 files into the game to listen to your own music directly in missions, but I wasn’t able to get it to work by plugging a flash drive into the front USB port. It likely wants an external hard drive plugged into the back and I didn’t have one on hand.

SD Gundam Battle Alliance is a game for Gundam fans, but actual knowledge of the series isn’t wholly important to your enjoyment. If you just want some great action RPG gameplay featuring some of the best mechs ever introduced in anime, this game has you covered. The array of available Gundam to choose from will keep you replaying missions just to find the one suit perfect for you.