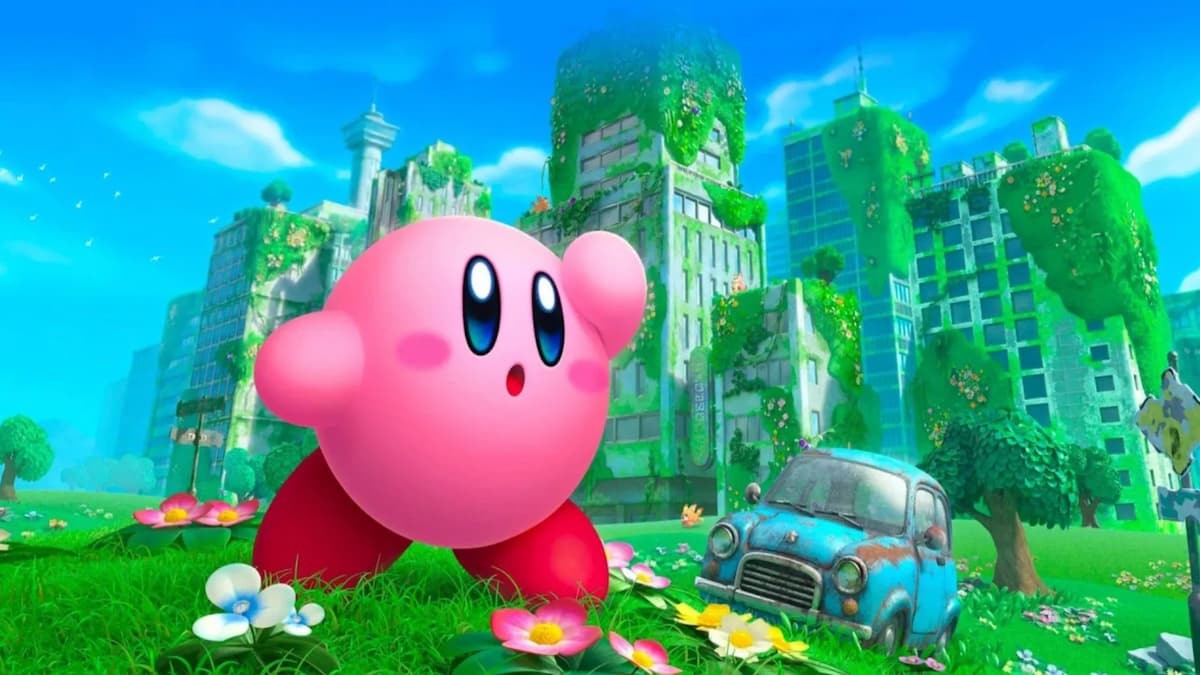 When people think of Nintendo’s exclusive franchises, the first that come to mind are always Mario, The Legend of Zelda, Metroid, Pokemon, Smash Bros. and so, so many others. The big N has a stellar library of exclusives, and while he might not be as iconic as his counterparts, the adorable pink blob Kirby has always managed to release some fantastic games. So, here, we’re going to be running through the top 10 best Kirby games of all-time, updated for 2022 to include the rather fantastic Kirby and the Forgotten Land!

While every other game on this top ten list are traditional platforming Kirby games, let’s use this spot to give a shout-out to one of the best spin-off games on the top 10 best Kirby games of all-time.

I don’t know why it took so long for a proper kart racing game in the Kirby universe to pop up, but fans were lucky when Kirby Air Ride finally became a thing for the Game Cube. Nintendo knows a thing or two about kart racers, so that’s a plus right out of the bat, and on top of that, the Kirby universe is filled with power-ups that make for great weapons that can be used in many creative ways during a race.

Here’s hoping another game in this series gets to see the light of day soon.

Nintendo went through a bit of a yarn phase about five to ten years ago. I don’t really understand why, but no harm down because all of those yarn games starring Kirby and Yoshi ended up being great, and Kirby’s Epic Yarn is no exception.

Although it came out for the Wii (and later re-released as Kirby’s Extra Epic Yarn on 3DS), Kirby’s Epic Yarn still holds up extremely well both visually and from a gameplay perspective too. The yarn motif is a timeless look that will end probably looking beautiful no matter how far we go with graphics, and the platforming is a blend of traditional Kirby gameplay with Ravel Abilities, playing on the Yarn theme.

Although by far the simplest Kirby game on this list, the first-ever Kirby game which debuted on the Gameboy still deserves a shout-out and is worthy of cracking out top 10 best games in the series.

While it lacks powerups, a core staple of the series now, just about everything else we’ve grown to love about Kirby is established in this game. Kirby’s voracious appetite, its ability to suck up and spit out enemies, hold its breath and fly, and of course so many of the series’ iconic stages, enemies, and musical tracks.

In spite of being the first Kirby game to be on Nintendo’s first Kirby 64: The Crystal Shards still took place on a 2D plane. However, don’t make the mistake of calling Kirby 64 lazy, though. It more than pulls its weight in gameplay.

Kirby 64 allows players to combine every single power in the game, giving them a multitude of really fun and creative powerups to experiment with such as combining spark and ice to turn Kirby into a refrigerator or you can charge up with double of the same power for even more destructiveness.

Honestly, it’s still to this day one of my favorite personal gimmicks in all of the Kirby games and I wish it would see more use.

For some, putting Kirby Super Star (Ultra, if you’re playing the re-release), this low might be sacrilegious as it’s a favorite of many hardcore Kirby fans, and I get the reasons. Kirby Super Star, released originally on the SNES, is an extremely polished Kirby game that feels like a true evolution of the gameplay that players to this point had only experienced on the Gameboy and NES.

It doesn’t really have any flaws from a gameplay perspective and it expands on the classic formula with lots of new powers, and the ability to convert enemies into allies, similar (but in a lot of ways better) than the more recently released Kirby Star Allies.

However, what knocks it down a couple of pegs for our list is the disjointed nature of the game modes, essentially having the game split up across a number of mini-games never really gives it a chance to build a world, story, or difficulty ramp-up/rhythm.

Kirby’s Dreamland 2 takes the Gameboy formula established in the first game, and merges it with some of the more modern elements of the Kirby franchise, with a few unique tricks up its own sleeve to great effect.

Kirby’s Dreamland 2 introduces powers into the mix, but also lets you augment your powers by teaming up with one of Kirby’s animal friends: Rick, Kine, and Coo. For example, hopping on Rick’s back with the fire ability allows the hamster to start breathing fire. Like all of the platformers on this list, Kirby’s Dreamland 2 has plenty of fun puzzles to solve using these mechanics, excellent level design, and memorable music.

Kirby’s Triple Deluxe laid the groundwork for what a modern Kirby game feels like, and its effect is still present to this day. There are far more overt story beats than ever before, and visually everything pops with far more vibrancy, color, and polish than ever before.

And of course, because it’s an early-ish 3DS game, you can flip on the 3D graphics and enjoy that as well if are were into that. While many third-party games struggled to make use of the feature, Nintendo first-party games generally made them work, and Kirby: Triple Deluxe is one of those games.

Where Kirby: Triple Deluxe leaned more into just traditional Kirby gameplay while upping the visual stimulation, Kirby: Planet Robobot benefitted from coming out after and the developers were clearly able to focus more on refining and expanding gameplay. The result is one of the finest modern Kirby games to date, landing in the top three of our list of the best Kirby games of all time.

Kirby: Planet Robobot, as the name might suggest, sees Kirby battling mechanical enemies that are trying to turn the world into a machine. Kirby is able to combine powers with powerful mech suits that turn Kirby into a murder machine (even more than usual) and also allows Kirby to solve new puzzles as well.

To someone that hasn’t played it before, it may sound just like another strange gimmick, but everything about Planet Robobot is extremely well-polished, designed, and fun and it has been a consistent fan favorite ever since its release back in 2016.

2. Kirby and the Forgotten Land

Finally. That’s probably the word that came to mind for many Kirby fans when saw that Kirby and the Forgotten Land would be opening things up and allowing Kirby to finally run around in a truly 3D environment. After the so-so Kirby: Star Allies, the series was in need of a shake-up, and HAL certainly delivered.

Kirby and the Forgotten Land takes everything you know and love about Kirby games, and puts in a 3D space where Kirby can fight, explore, and solve puzzles in brand new ways. Although not revolutionary in a gameplay sense, we’ve had 3D platformers since 1996 at least, for the series it’s an absolute game-changer and is one of the most refreshing and fun Kirby games ever made. Whether it’s experimenting with powers or fighting bosses, even these classic staples feel new and exciting now that they are usable in a 3D plane.

For our top spot, I have to go with the NES Classic (or GBA remake if you prefer), the game that for many put Kirby on the map and established it as a core Nintendo character and franchise. Kirby’s Adventure. To date, it’s still, at least in this writer’s mind, the perfect classic 2D Kirby experience. No tricks or gimmicks, just suck up some powers and go.

Kirby’s Adventure and Nightmare in Dreamland still feels really big, even by modern Kirby game standards with 41 levels across seven worlds, each with its own memorable flair and themes. There are a lot of secrets to uncover and 100%ing the game is incredibly satisfying.

The gameplay is just challenging enough to not be a total walk in the park, but still accessible to a little kid with some skill. It’s chock full of classic powers and introduces the popular Kirby anti-hero, Meta Knight, who would go on to be a star in his own right.

It’s hard to believe that the original, Kirby’s Adventure, was an NES game. It still holds up incredibly well and is worthy of our number one spot in the best Kirby games of all time.

With the announcement of Kirby’s Dream Buffet set to offer up some chaotic multiplayer action, there’s always the possibility it could break into our top 10 when it launches in Summer 2022. We’ll update this post as and when it drops.