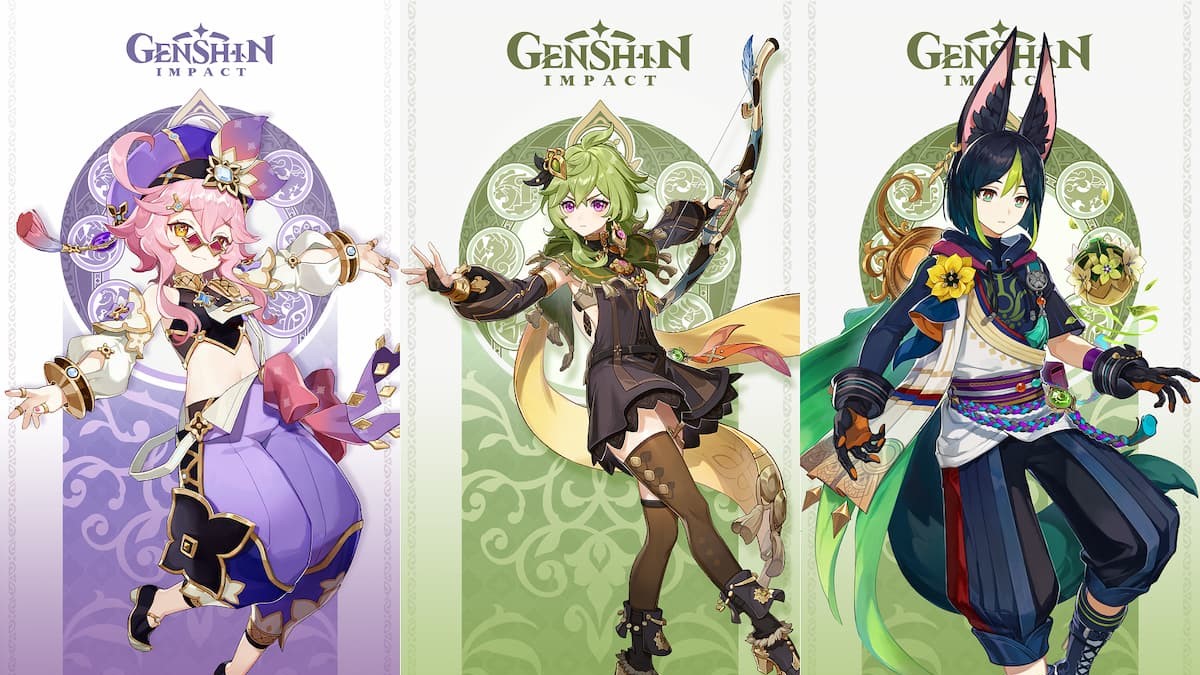 Even though Genshin Impact Version 2.8 has recently debuted, we’ve already gotten many details and sneak peeks regarding the 3.0 update. So, if you want to find out about this newest version, here’s an accumulation of rumors and leaks, including a release date, and potential banners for Genshin Impact 3.0.

Based on miHoYo’s previous six-month timeframes, Genshin Impact Version 3.0 will come out on Aug. 24, 2022. But, be aware that the release date can change over time since other circumstances can affect the game’s development. Nonetheless, fans can still look forward to the eventual debut of new characters, items, and locations.

Although information about the upcoming update is vague, Genshin Impact’s official Twitter did showcase its latest members: Tighnari, Collei, and Dori. With these details in mind, they will likely be the newest character banners, though they haven’t been officially confirmed yet.

As an Electro user, Dori is a collector of unique materials and valuables in Sumeru. Looking at her overall performance from Honey Hunter World, we can see her Normal Charged Attack of Marvelous Sword-Dance, Elemental Skill of Spirit-Warding Lamp: Troubleshooter Cannon, and Elemental Burst of Alcazarzaray Exactitude. Her Passive abilities also include Unexpected Order, An Eye for Gold, and Compound Interest.

By using Dori, you’ll be able to deal damage with three consecutive strikes when utilizing the Attack of Marvelous Sword-Dance. Additionally, Travelers can maximize the powers of the Spirit-Warding Lamp by restoring energy with Compound Interest.

According to Genshin Impact’s Twitter, Collei is a Dendro user and an Avidya Forest Ranger Trainee. From her time in Mondstadt, the character is friends with Amber, despite being closed off to others.

Collei has made an appearance in the manga rendition of Genshin Impact. In these stories, we see her being experimented on by Barnabas and Dottore, known members of the Fatui. As a result, she begins to acquire the powers of a Vision after suffering from the painful projects of the two men.

Collei’s primary weapon is a bow with a Charged Normal Attack of Supplicant’s Bowmanship, dealing Dendro damage. Alongside this combat technique is her Trump-Card Kitty, which produces a circular target area that injures surrounding enemies. Last but not least is her Elemental Skill, Floral Brush, where the character throws a Floral Ring directly in front of her.

The fluffy-eared Tighnari is another character that will receive a banner in Version 3.0. Similar to Collei, he works as an Avidya Forest Watcher and obtains the same type of Vision as her.

When examining his skills on Honey Hunter World, you’ll get a glimpse of the attacks Khanda Barrier-Buster, Vijnana-Phala Mine, and Fashioner’s Tanglevine Shaft. For example, Fashioner’s Tanglevine Shaft uses a tracking system to search for enemies and deal Dendro DMG to foes. Tighnari also embodies his role as a Forest Watcher when he initiates Encyclopedic Knowledge, a skill that can detect the location of resources.

Rumors and leaks of Version 3.0 have continuously stated the return of Zhongli and Ganyu’s Character Banners. Through this opportunity, you can use Zhongli’s Geo Vision and Ganyu’s Cyro powers to advance further in gameplay. However, news about this subject isn’t clear, so we won’t know until more information comes.

There could still be other potential characters joining the cast in the newest location, such as Cyno (shown in Teyvat Chapter Storyline Preview) and Scaramouche, the estranged Fatui Harbinger.

Fans of Genshin Impact have been working hard by gathering loads of information about Version 3.0. After examining the many rumors and leaks, here are a few interesting aspects that could be in Genshin Impact.

Thanks to the Sumeru Preview teaser, fans got to see a sneak peek of one of the seven regions in Teyvat. Compared to the other cosmic beings in nearby areas, this place worships the God of Wisdom, the Flower Archon.

In the latest video, we discover more about the Dendro element and the layout of Sumeru. Like most of the regions of Genshin Impact, the location exhibits stunning greenery and unique flowers throughout the land.

On the opposite side of the spectrum comes the desert side of the map, which you can see on TikTok:

If you look back into the Teyvat Chapter Storyline Preview, you can spot the name of the Archon Quest, Act III: The Truth Amongst the Pages of Purana (set in Sumeru). So, this mission will undoubtedly be the main task in the newest storyline.

Travelers can also view an entire map of Sumera by UBatcha, as shown here:

A Larger Role for the Fatui Members

Since the release of the Teyvat Chapter Interlude Teaser: A Winter Night’s Lazzo, fans finally got to see most of the notorious Fatui Harbingers. Based on this video, the Fatui will likely have more of an impactful role and backstory in the 3.0 update.

This exclusive debut will hopefully expand in the latest update to explain more of their lore and overall goals. Furthermore, Reddit user SusAmongusLeaks has claimed that Version 3.0 will primarily focus on the sinister group, including a Fatui Domain.

Several leaked gameplay videos of Genshin Impact showcases all-new creatures within the Sumeru region. For instance, a user captured the gameplay of a Jadeplume Terrorshroom, a deadly enemy that can shout to produce a damaging attack on nearby players.

Another monster that will join the roster is a mysterious mushroom-looking creature that launches Hydro powers to injure the Traveler.

Lastly, an alligator enemy wanders around the water areas within Sumeru. Unfortunately, this creature also whips its tail to damage the player, so you must dodge these attacks to make it out alive.

One rumor regarding Version 3.0 features a challenge named “Tablet Analytics”. Based somewhere in Sumeru, you’ll help out the alchemist, Hajanad, by participating in three timed combat-heavy rounds. In addition, every time you complete a challenge, you’ll earn items and valuables, similar to other events in the game.

Travelers will have the opportunity to use The Remelting Device every 15 seconds, providing you with a limited attack buff.

That does it for all the Genshin Impact 3.0 update information, including its release date, banners, and other leaks. If you want to see the latest guides for Version 2.8, you can check out the location of the Phantasmal Conches from the newest quest. Be sure to also look at the relevant links below for additional content about the game.