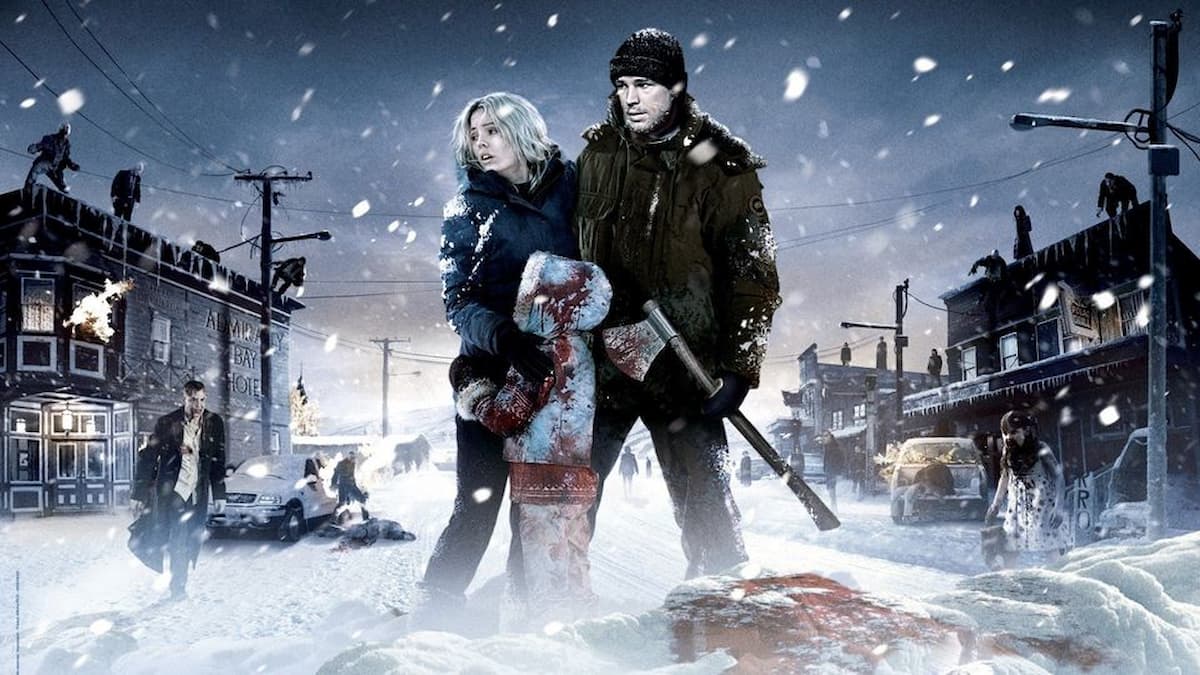 Vampires have made their mark on the entertainment industry, especially with their numerous variations in books, video games, and movies. Even to this day, films in this blood-sucking sub-genre have a huge impact on the popularity of these undead creatures. So, now it’s time to sink your teeth into some popcorn because here are the top 10 best vampire movies that slay.

In this action-packed, bloody battle between good and evil, Wesley Snipes is the vampire hunter, Blade. He is both half-human and half-immortal with a drive for revenge after a vampire killed his mother during childbirth. Ever since that day, he possessed the strength and senses of the vampiric creatures and used his powers against them in his fight for humanity.

Blade eventually crosses paths with Deacon Frost (Stephen Dorff), a vicious vampire that becomes his mortal enemy. A war between the undead and humans plagues the city as Frost plots to overthrow anyone standing in his way. Watch as Welsey Snipes completely embodies the vampire hunter’s role and see why the fanbase remains strong after all these years.

This titular character may be returning to the Marvel Universe because of his continued popularity; a hint of Blade’s resurgence was teased during an end-credit scene in the Eternals. Only time will tell if we get to see the comeback of our favorite vampire slayer, and we can’t wait to see a revamped imagination of him.

Interview With the Vampire

Interview With The Vampire tells the story of Louis (Brad Pitt), a 200-year-old vampire questioning how his life turned out. To sort out his conflicted feelings, he meets with a human, Malloy (Christian Slater), and walks him through the journey of his undead existence. Louis begins with the moment that changed everything, the day he turned into a vampire.

He was down on his luck after the death of his family when suddenly, a vampire named “Lestat” tempted Louis with a life of immortality and power. Unfortunately, his time in the 18th century is nothing but ordinary, and he soon realizes just how cold-hearted the creatures can be.

This film portrays vampires in a uniquely sympathetic way rather than the horrific perspectives we’ve seen before. There are, of course, still many scenes that showcase the creatures in an unremorseful, brutal way, but there is a sense of empathy when Louis explains his hardships to the interviewer.

Interview With The Vampire also features many Hollywood stars, including Tom Cruise, Antonio Banderas, and a young Kirsten Dunst. Each actor brings a lot to the table, and they all combine to deliver a haunting and thrilling movie experience.

As the highest-grossing vampire movie, Twilight had to be on this list. Whether you love it or hate it, everyone knows the story of Edward Cullen (Robert Pattinson) and Bella Swan (Kristen Stewart); a classic tale of girl meets vampire. She begins her journey in the gloomy town of Forks, Washington, where she discovers a hidden secret that could threaten her life.

Bella questions the mysterious Cullen family, specifically the 17-year-old Edward, who seems to hate her. But, through the powers of the internet, she unravels the truth of the Cullens and unexpectantly falls in love with the strongest predator known to humankind.

The Twilight Saga keeps sweeping the nation with its five movies, various books, and possible installments rumored to be released. A new generation of fans combined with the original day-ones maintains Twilight’s success as one of the most famous vampire movies.

Based on a comic book miniseries, 30 Days of Night is an unforgettable horror movie you won’t want to miss. The film follows the events in Barrow, Alaska, a town right above the Arctic Circle where there is no sunlight for one month out of the year. A gang of vampires use this opportunity to escape the shadows and hunt down humans to quench their thirst.

The town’s sheriff, Eben Oleson (Josh Hartnett), and the remaining survivors of the attacks from the deranged creatures must survive without any daylight to protect them. Since there is no way to communicate with the outside world, you’ll watch what this small town will do to last the grueling 30 days.

The director, David Slade, is a horror genre veteran having previously worked on the Hannibal TV Series, The Twilight Saga: Eclipse, and Hard Candy. Alongside him is Sam Raimi, director of the popular films Doctor Strange in the Multiverse of Madness and the cult classic, The Evil Dead. These two men mixed their passions for horror and, in return, made a movie sure to give you nightmares.

Humankind is on its way to extinction in a world where vampires dominate the world. The creature’s blood supply from humans is becoming scarce, and they need an alternative source to thrive in their undead empire. As the vampires suffer from hunger, they become unstoppable, feral monsters that terrorize everything around them.

Dr. Edward Dalton (Ethan Hawke), a vampire hematologist, must team up with the last remaining humans to save both of their species. As the story progresses, he soon learns about a cure that could restore the creatures to their original selves. However, the race to save humanity is a long and challenging battle in which Dalton and the group must do whatever it takes to stop the world’s extinction.

Join Edward Dalton, Lionel ‘Elvis’ Cormac (William Dafoe), and many more in a universe where vampires are the norm, a viewpoint rarely seen in films. Yet, Daybreakers stands the test of time after all these years and is still beloved by many fans.

Not all great vampire movies have to be a bloody and terrifying experience, especially with the film Hotel Transylvania. Dracula (Adam Sandler) is the owner of a resort away from the human world, with each guest bringing in hordes of various monsters. You’ll see him from a different perspective as he takes on the role of a father to his daughter, Mavis (Selena Gomez).

On the night of Mavis’ 118th birthday, a human stumbles upon the party; Dracula suddenly realizes that his vampire daughter and the unwelcomed guest have already begun to fall in love. See how the movie unfolds in its many crazy shenanigans and humoristic spins of classic monsters, including the voices of Andy Samberg, Molly Shannon, and many more.

Hotel Transylvania has received several sequels and even a TV series if you want to explore the movie further.

Another version of the most well-known vampire comes from one of the best renditions of the character, Dracula. The film begins with Count Dracula (Bela Lugosi) hypnotizing a real estate agent, Remfield (Dwight Frye), into being a servant that aids him in his voyage to London. Once they arrive, the Count terrorizes everyone by sucking the blood out of countless young women.

Each of them turns into a vampire until Dracula sets his sights on Mina (Helen Chandler), the vampire hunter’s daughter, Van Helsing (Edward Van Sloan). Helsing is heavily motivated to stop Dracula from his crimes against humanity and fights to save his daughter from becoming the undead.

Dracula is well-regarded as a classic for vampire movies and wasn’t the only horror film in 1931, including movies like Frankenstein and Dr. Jekyll and Mr. Hyde.

The first movie to ever involve a vampire is none other than Nosferatu, an unauthorized version of Bram Stoker’s book, Dracula. The film tells the story of Thomas Hutter (Gustav von Wangenheim), a man sent out to discuss house properties with Count Orlok (Max Schreck). However, he soon begins to regret ever coming once Orlok reveals himself as a vampire.

Hutter tries to escape Orlok’s castle in Transylvania and wants to protect the town of Wisbourg and his wife, Ellen (Greta Schrpeder), from the Count’s demise. Unfortunately, the vampire kills everything in his path as he draws closer to everyone Hutter loves. Will the human make it in time to save his wife? Or will the town be plagued with death? Find out as you adventure into this black and white critically-acclaimed feature.

Even if this film is entirely in silence, there is a terror that derives from the absence of sound and Count Orlok’s eerie appearance that frightens anyone just by looking at him. You’ll get to experience how vampire movies officially started and why these creatures are still popular characters in the fictional world.

Referencing J. M. Barries’ characters in Peter Pan, The Lost Boys takes it to a new level filled with terror and blood. This 80’s classic stars Jason Patric as the older brother, Michael, and Corey Haim as the younger brother, Sam. The characters move with their mother, Lucy (Dianne Wiest), to a Santa Clara Beachtown in California. When Michael pursues a local girl, Star (Jami Gertz), things take a dramatic turn when he learns she is involved with a vampire gang.

The leader of this undead group, David (Keifer Sutherland), becomes enraged with Michael and Star being together and starts to torment the two. Sam and his newfound friends, who also claim to be vampire hunters, enlist to help the two in their efforts to escape the creatures’ clutches.

Joel Schumacher’s The Lost Boys has claimed to be the beginning of the Teenage Vampire genre. Additionally, the filming location in Santa Cruz County is now regarded as the “Vampire Capital of the World,” as mentioned in SF Gate. Watch what happens to these two brothers and their friends as they fight for their lives against teenage vampires.

What We Do In The Shadows

The comedy-horror mockumentary, What We Do in The Shadows, explores the narrative of Viago (Taika Waititi), Deacon (Jonathan Brugh), and Vladislav (Jermaine Clement). The struggles of these vampires are not the typical ones you’ve seen or heard before; they suffer from mundane things, such as paying rent and not being able to get into exclusive clubs. There is also an internal conflict between these undead flatmates, especially when some roommates don’t pull their weight to keep the house clean.

In a documentary style, What We Do in The Shadows brings humor to creatures mostly known for horror. This film is a must-see watch to see the comedic styles of Jermaine Clement and Thor Love and Thunder’s director, Taika Waititi, along with everyone else that makes this movie a masterpiece. You can continue the fun by watching FX’s TV version of this film and experiencing the lives of all-new vampires.

So, there you have it, these are the top 10 best vampire movies that slay. Of course, there are an excessive amount of these types of films, and if you think one deserves to be on here, leave a comment down below. For more vampire content, you can check out the relevant links underneath and any of our news and features here on Twinfinite.