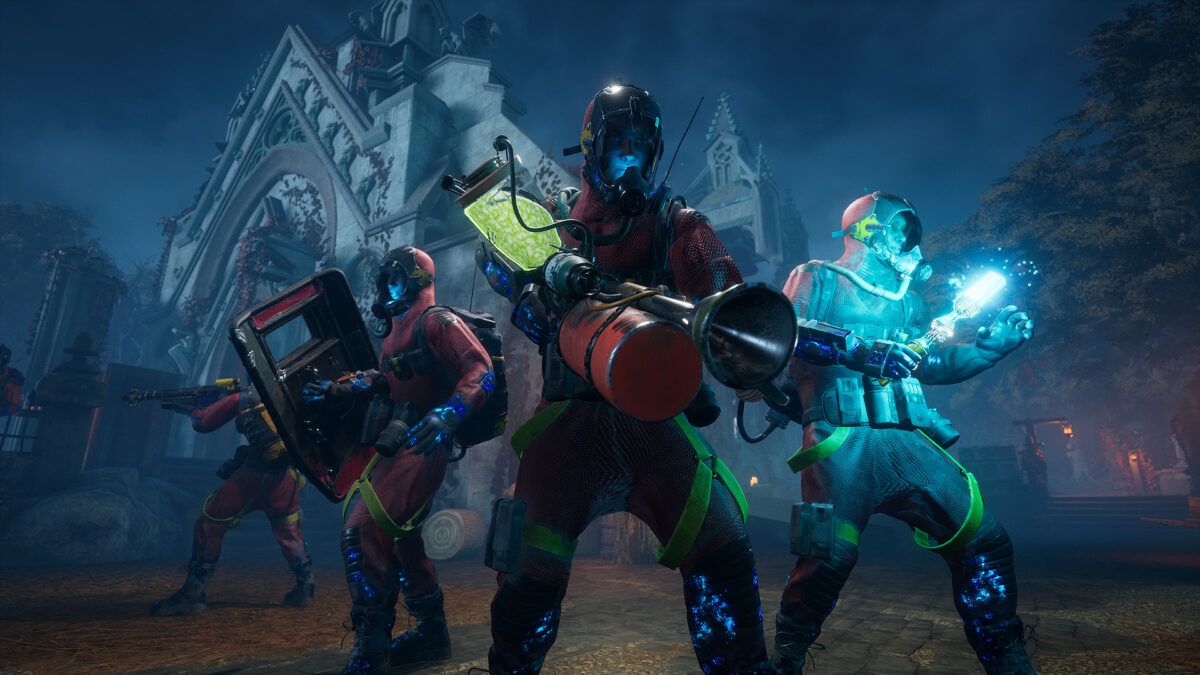 As someone who spent a considerable amount of time with Phasmophobia back when it first launched in early access, Midnight Ghost Hunt seemed like a refreshing change of pace. No shade on Phasmophobia, which is still an excellent co-op horror game that will keep you tense the whole way, but Midnight Ghost Hunt has opted to go in a wildly different direction and the result is a chaotic multiplayer experience that’s always a good time, no matter which role you’re in.

The game is centered around a core 4v4 multiplayer mode where we have four ghosts and four human hunters. At the start of a match, the hunters have a few minutes to hunt down all four ghosts and destroy them. If you’re playing as a ghost, you’ll need to do your best to conceal yourself until midnight comes around.

This phase definitely starts the ghosts off at a disadvantage; while it is possible to use spectral abilities to catch the hunters off-guard and even knock them out, they’re a lot less effective than they would be at midnight, and the hunter tools are just way too powerful at this stage. Because of that, you’ll need to cleverly hide yourself in various household objects around the environment, and maybe knock over a table or two to throw a hunter off your scent.

This results in tons of hilarious moments in the early game because as a hunter, you just never know when a TV is going to launch itself in your face when you round a corner. While hunters do have the advantage at the start, you can easily get knocked out if you’re not careful.

When midnight comes around, however, the entire game flips on its head. Now, it’s the hunters who have to scurry and hide while the ghosts come out in full force. The entire level turns red, and hunter weapons become much less effective. It’s still possible to take down a ghost during the midnight phase, but it would require tremendous teamwork on the hunters’ part.

I will say that the game does feel a little unbalanced and leans more towards the ghosts, at least during the time of writing. As long as one ghost is still alive when the clock strikes twelve, all four ghosts will be revived at full force and can start pursuing the hunters. It’s a much easier task to stay hidden in the early minutes of the match and just play it safe and bide your time till midnight, then come out and wipe out the entire hunter team.

This imbalance is further highlighted by the fact that Midnight Ghost Hunt also comes with a good selection of ghost-busting and detection tools for the hunters. There are signal detectors and sound sensors, and as I played more matches, I found that it was extremely important for the hunters to coordinate with each other and decide which tools each person was going to make use of, then divide and conquer. This is easy when you’re in a pre-made team, but if you’re planning on jumping into Quick Play and using the matchmaking feature, it can be very rare to match up with three other people who can all communicate with each other effectively.

Hunters can also fill different roles on the team, with one or two people acting as medics to help revive their teammates when they’re down. Again, though, this requires effective communication in order for a team to recover.

Ghosts, on the other hand, aren’t exactly equipped with the same type of support skills that the hunters are. Ghost players are able to act more independently from each other, and it’s definitely apparent that you don’t need to communicate quite as much to be effective as a ghost team. It’s still early days for Midnight Ghost Hunt, though, so I’d expect to see more balancing changes to even the playing field for both sides.

The foundation that Midnight Ghost Hunt has laid for itself is already solid enough for it to emerge as a really fun multiplayer game, too. Even if I was often at a disadvantage as a hunter, it’s still incredibly satisfying when you’re able to identify a ghost posing as a chair and immediately shoot the crap out of it with your spectral beam gun, then suck it up with a vacuum cleaner. The weapons and tools truly make you feel like you’ve just stepped out of the Ghostbusters movie, and that just makes it hard to get mad at the game even when you’re losing.

Midnight Ghost Hunt is showing a ton of promise just a few days into its early access release, and while I’d still caution new players to wait a little until more modes get added and the game gets balanced a little, it’s still a great time overall.