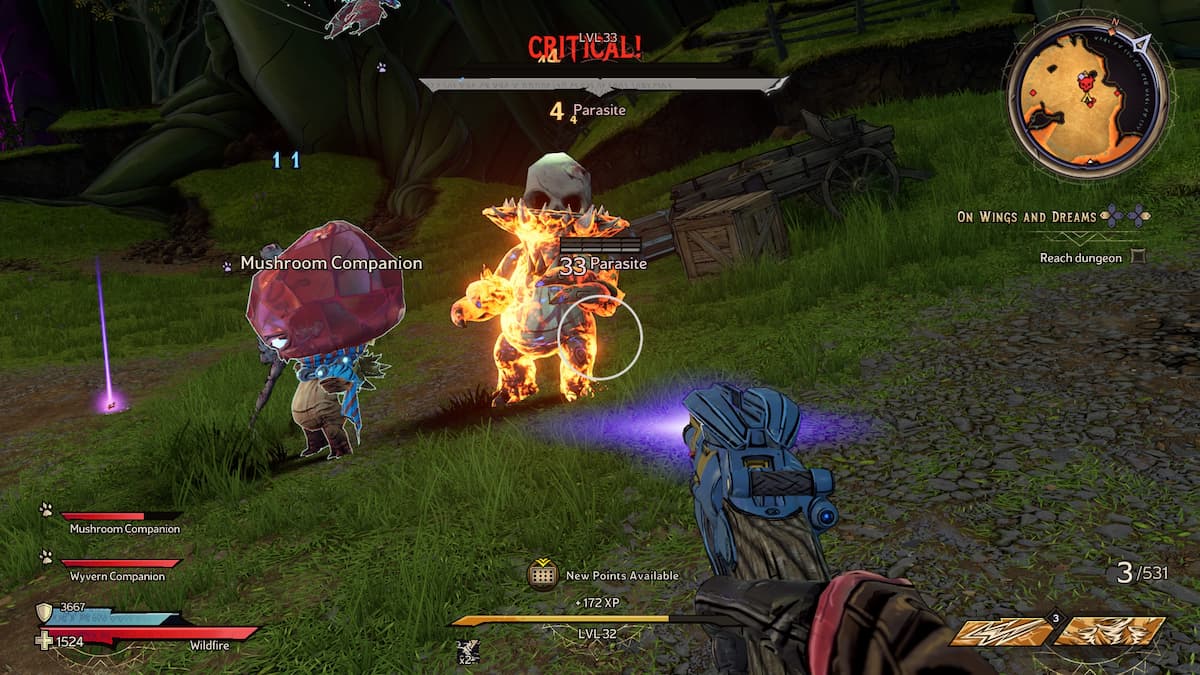 Bosses are a big feature of the Borderlands series. Sometimes you have to fight people, other times massive tree monsters. In the case of this boss, you must fight a mushroom. Here’s how to beat all three phases of Parasite in Tiny Tina’s Wonderlands.

The first thing to note that with the way enemies scale in Tiny Tina’s Wonderlands, there will never be a point in which it isn’t worth it to fight bosses more than once. That’s certainly the case for Parasite.

Parasite is first fought as part of the Walk the Stalk side quest found in Tangledrift. There is a very convenient fast travel point labeled as What’s Left of Driftwood set up outside of Parasite’s boss area to farm the boss. Though, there are much easier ways to farm bosses in the game.

Parasite will be levitating above the ground and will have a blue shield bar you need to wear down. Make sure you have a decent shock weapon for this part, as it will make quick work of the shield. If you’re a class with companions, they will be able to help with the mushroom monsters spawned by Parasite, but if you’re alone it will be very easy to be swarmed. Crowd control spells or a splash damage Torgue will get good use here.

Parasite will drop to the ground and run around, now sporting a normal red health bar. Fire damage is the key here. Along with the same mushrooms from the previous phase being spawned, now skeleton archers will join the fight. Focus on picking the skeletons off first, Parasite doesn’t move fast enough to be a concern but getting peppered from the skeleton’s arrows will add up.

Parasite’s mushroom head is now gone exposing the creepily human-like skull underneath. During this phase you’ll be constantly bombarded with the attacks of melee skeletons. With Parasite’s new bones health bar, he is now more susceptible for frost damage, and so are the skeletons being spawned. The best thing for this phase for all you Spore Wardens is the use of the Blizzard action skill that is perfect for keeping the skeletons off you while doing a good chunk of the damage.

Once this final bar is gone, Parasite will be vanquished and you will get your loot fountain.

That’s all you need to know for how to beat all three phases of Parasite in Tiny Tina’s Wonderlands.

For more help with loot, we have a guide for getting legendary weapons and gear.