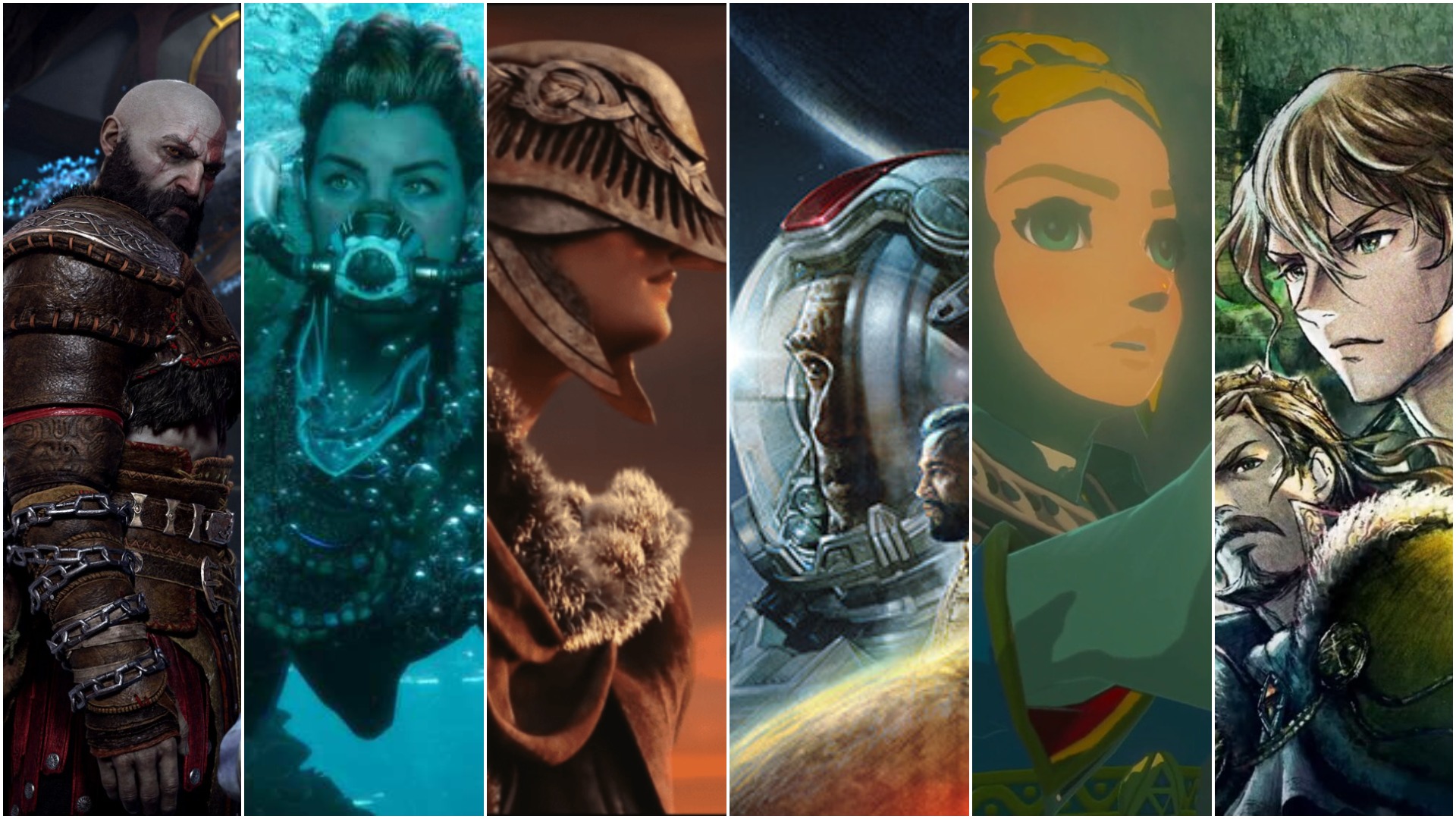 Another year brings with it another exciting line-up of new games to look forward to. As part of Twinfinite’s annual award season, the staff has voted for its six most anticipated games of 2022. These are the landmark titles we think will define what is shaping up to be the first really big year of this most recent console generation.

Editor-in-Chief Ed McGlone: Depending on who you ask, Starfield might seem low on our list, or they might feel it’s too high. Personally, I think just being on a list of most anticipated games is just the right spot.

It’s being developed by Bethesda, so that alone means you have to be hyped for it at least a little bit, as long as you’re into open-world RPG games. Bethesda has earned its reputation for being one of the most prolific creators in that space.

The reason it’s hard to justify it being any higher on this list is, well, despite there being a good chance it will release this year, we still know so very little about Starfield. We know it will take place in space. We’ve seen a few trailers teasing that now at this point. You’ll have the freedom to explore the stars as you see fit. And… that’s just about it.

Now that Microsoft is technically running things over at Bethesda, maybe some of the execs over at Microsoft can help grease a few wheels and get Bethesda to spill the beans sooner rather than later.

Editor-in-Chief Ed McGlone: After a vote of all of the editors of Twinfinite, Triangle Strategy sits here in the middle of a list filled with AAA giants of the industry. How did that happen? Well for starters, a lot of us on the staff are huge fans of Octopath Traveler — a game that shares an extremely similar art style and also had its development led by Tomoya Asano, giving us great confidence in Triangle Strategy.

A lot of us also really love strategy RPGs and games with difficult choices. Triangle Strategy will mash those two elements together and appears to be channeling the spirit of SRPG classics such as Tactics Orge and Final Fantasy Tactics.

What we’ve played so far in the demo is great. Balancing the consequences of all the choices you make, seeing how they affect the lives of the characters, and how the story plays out appear to be major elements of Triangle Strategy.

Personally, I’m a sucker for a game with a true branching storyline. Combine that with old-school SRPG action, a score that is hopefully on par with Octopath Traveler’s, and a beautiful 2DHD art style, and you have a recipe for a game that I think will be a serious GOTY/Best RPG contender in 2022.

Features Editor Andrew McMahon: When Horizon Zero Dawn was originally released back in 2017, I just couldn’t get into it. No matter how hard I tried, the game just felt like another open-world action RPG with nothing to set itself apart. Despite this, I kept playing, and eventually, something clicked.

After unlocking unlimited fast travel and a couple of unique weapons, the game really opens up. Combat becomes this intense back-and-forth between Aloy and the afflicted dinosaur-like machines that make up the game.

Whether it’s a fight against raptor-like Watchers or the T-Rex-like Thunderjaw, every battle was intense, requiring plenty of strategy, planning, and skill to survive. It wasn’t long until I found myself going out of my way to fight in Horizon Zero Dawn, as the combat, especially the bow, just felt more fluid and rewarding than any game I’d ever played.

From what we’ve seen so far, Horizon Forbidden West is shaping up to be much of the same, though it’ll also have some interesting new features. The ability to swim underwater and glide through the air, along with the interesting new dinosaurs and improved AI are just a few of the unique features to look forward to that’ll open up the gameplay.

Combine this with beautiful, fresh tropical landscapes and the high-fidelity visuals of the PS5, and it’s easy to see why Horizon Forbidden West is one of the most anticipated games of 2022.

Staff Writer Rebecca Stone: The first trailer that we saw for Breath of the Wild’s sequel was such a tease that it was difficult to speculate what the game would even be about. All we knew at the time was that it would be a darker continuation of the original game’s story. In 2021 we finally got another look, this time showcasing gameplay with new mechanics and floating islands in the sky.

Here we are, over two years since the initial reveal, and even though the game’s title is still unknown, we’re hungrier than ever for more information. Nintendo shared that Breath of the Wild’s sequel is planned for a 2022 release, so the fact that we could be playing it before the year’s end makes us excited to learn more.

Since both trailers showed the gameplay and story in implicit ways, our minds have been running wild with possibilities.

Is Ganondorf being reborn once again? Could we be playing as Princess Zelda this time? Are there time-altering mechanics involved? All of the great potentials for this game are what makes it so highly anticipated.

If the sequel to Breath of the Wild can capture the same sense of awe we felt when playing the original game, we’ll be in for something special. We hope that the game will be able to provide that same magic while also giving us something new and unexpected to discover. From the looks of the first two trailers, it seems like it will do exactly that.

Reviews Editor Zhiqing Wang: We’ve been looking forward to Elden Ring since the day it was announced, and no, our hype hasn’t died down a single bit. Especially now that it’s so close we can practically taste it, Elden Ring looks poised to become the most ambitious game we’ve ever seen from FromSoft.

Developed in collaboration with George R.R. Martin, Elden Ring has the potential to deliver the strongest Souls-like game in terms of world-building and narrative. Not that the Souls games were weak on that front, but series creator Hidetaka Miyazaki has often said that storytelling isn’t necessarily his strong suit.

Put GRRM’s penchant for lore and world-building together with FromSoft’s knack for creating fun and punishing combat systems in a beautiful open-world, and it sounds like a surefire recipe for success. From everything we’ve seen so far, Elden Ring definitely looks like a strong GOTY contender for 2022, and we can’t wait to finally check it out.

Senior Editor Alex Gibson: Perhaps more so than any other of Sony’s major first-party IPs, God of War underwent a major transformation for its debut on PS4 back in 2018. Kratos returned, and so too did the furious combat and eye-popping visuals that have been a signature of the franchise since its inception.

This time around, though, there was a new focus on storytelling, which offered a markedly different tone to previous games in the series. It was a soft reboot, of sorts, also boasting a different third-person perspective, RPG-lite progression mechanics, and a semi-open-world design.

The result? One of the most brilliant reinventions of a franchise we can remember, suitably bringing it up to speed with modern standards which, in an instant, made an age-old IP relevant once again. It should come as no surprise, then, that its sequel is at the very top of our most-wanted list for 2022.

In part, the simple notion of just getting to experience more of the same a second time around is enticing enough, but the big intrigue is where Sony Santa Monica is taking the story this time. God of War left us on something of a cliffhanger with some big unanswered questions about how the nature of Kratos’ relationship with both Thor and Atreus would pan out. There’s also the matter of exploring the several other realms of Norse mythology that were left tantalizingly out of reach in the 2018 game.

Of course, we’re hoping that God of War Ragnarok isn’t just more of the same in terms of gameplay, and we’re expecting Sony Santa Monica to make new adjustments and additions to what was already brilliant combat and traversal mechanics. It’s going to be fascinating to see how the developer iterates and improves upon the formula, not just in terms of refinement, but for the sake of making God of War 2 feel special for PS5 hardware, too.

There’s undoubtedly a big weight of expectation resting on the shoulders of the Santa Monica team, but given their success transforming the series in its last outing, we’re confident they’re set to deliver a sequel that will become the series’ high watermark.

If you’re reading this the day we posted it, it’s not too late to vote for your most anticipated game of 2022! Let’s see if our readers differ from our editors this year. Learn how to vote here.