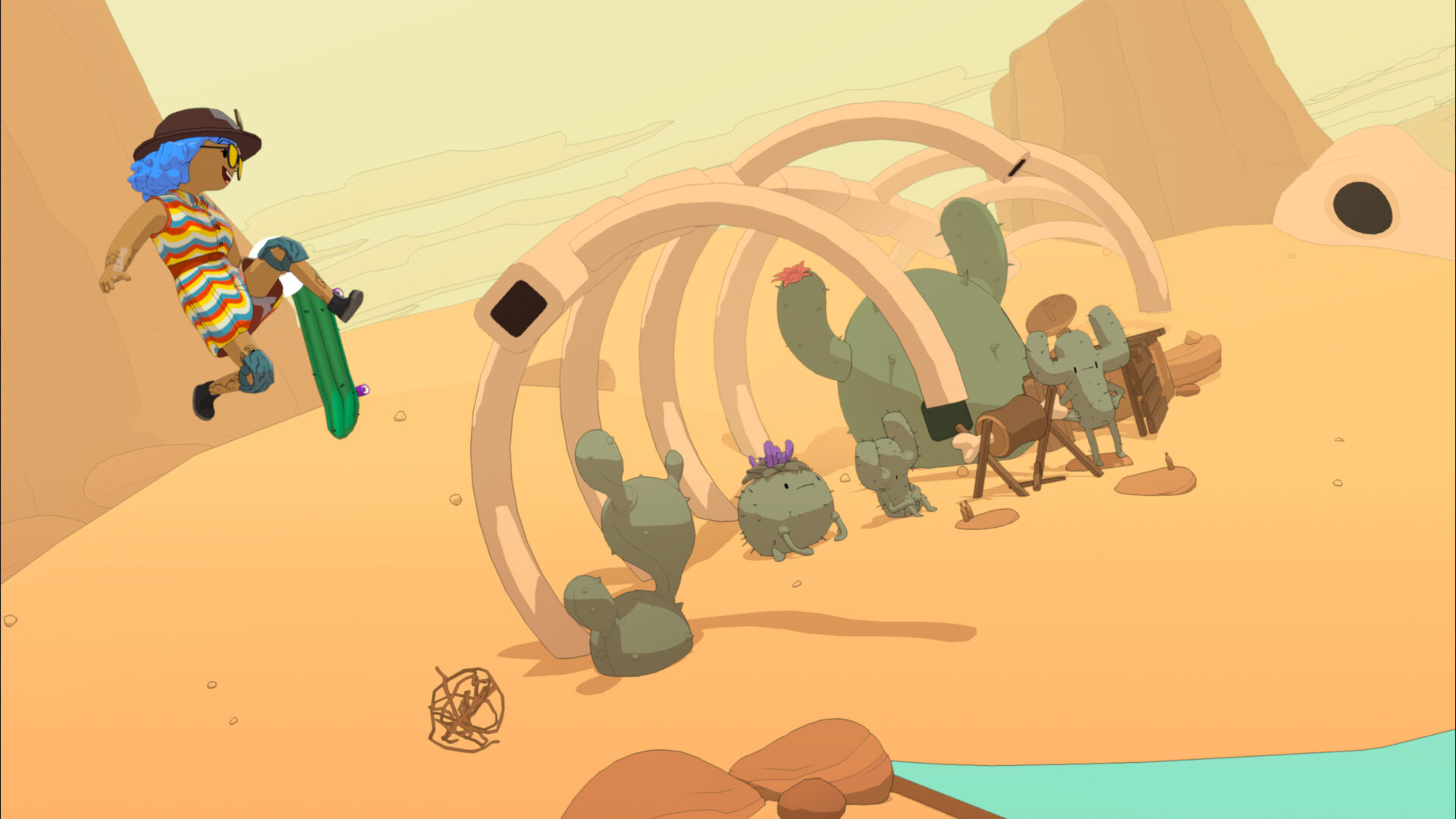 Over the past few years, the OlliOlli series has become one of my favorite comfort titles on the Nintendo Switch. The game’s simple but clever side-scrolling skateboarding has had me saying “just one more level” on many a night. So when OlliOlli World was announced back in April 2021, I was simultaneously excited and uneasy.

Would the game still be the same with a switch to 2.5D? Does the focus on the story take away from the gameplay loop? This is just a small sampling of the questions I had about the next installment in the series.

Luckily, Roll17 was nice enough to give me a sneak peek at those changes via a digital hands-on preview event last week. And from what I’ve seen so far, they’ve really hit the nail on the head with OlliOlli World.

Obviously, the first thing I wanted to know is, “does the game feel any different alongside all of these big changes?” Thankfully, OlliOlli World felt as fluid and fun as ever, with very minimal core-gameplay changes despite the shift to 2.5D and focus on the story.

Transitioning from kickflipping over a gap to grinding on a rail for a sick combo was still a big part of the game, and it felt as smooth as ever. Roll7 Creative Director John Ribbins addressed the importance of keeping that fluid gameplay and making the levels more accessible when discussing OlliOlli World below:

“We’re super focused on keeping that flow-state gameplay and having a really high skill ceiling for those of you who want to challenge yourselves and push the high-score limits with super-complex tricks and high-level combo mechanics – but this time we’ve also focused on making the levels more accessible to people at all skill levels, too.

In-game, you can take things at your own pace. There are side-quests and optional levels which unlock throughout the journey that you can play whenever you want. You also get to choose between multiple routes in a lot of levels, so you can take a tougher path if you really want to max out your score, or keep things a bit simpler if you just want to chill and take in the environment around you.”

From the three biomes that I played in the OlliOlli World preview, the change in accessibility resulted in a noticeable improvement gameplay-wise. Sometimes I would feel bold and would go down the gnarly path. While far more challenging and fast-paced, these high-risk, high-reward sections felt super satisfying to eventually complete.

After eating it a fair amount of times across a few different levels, I’d then opt for the chiller route, taking in the various dynamic environment while completing some basic objectives along the way. Getting to switch between these play styles highlighted a gameplay element I definetly felt was missing in the first two games.

Additional objectives and side levels also added another flavor to the gameplay, introducing interesting challenges and wacky characters that were specific to each environment. While not necessary to progress, completing these came with great incentives, as OlliOlli World features an endless amount of customization when making your skater.

I’m not exaggerating when I say the cosmetic options that make up this game are endless, either. Between all of the different faces, boards, clothes, and other items that make up the game, there are thousands of different outfit possibilities to come up with – though the only one I want is that Bee Suit.

After a few hours of carving up single-player and creating the weirdest looking skater ever, I then gave multiplayer a try. Now, it’s important to preface that I am a super competitive person. I can’t let a game of trivial pursuit happen with my friends or family without really getting into it. As such, I really love the way that OlliOlli World has added in multiplayer.

You see, instead of relying on putting a bunch of people in one lobby simultaneously, the game uses asynchronous gameplay. This means you don’t have to get all of your friends in the same place at the same time, instead using a scoreboard-like method of tracking for each mode (League and Gnarvana Portal).

Leagues function similar to a daily challenge, which is perfect for anyone that wants to prove their combo mastery. This mode pits you against other players of a similar ability level while you all compete on the same level to achieve the highest score in a set amount of time. It even features different tier levels and incentives for reaching them.

On the other hand, Gnarvana Portal is pretty much the game’s level creator. In this mode, players can generate levels based on a section of criteria they define, including style, difficulty, and length. This then creates a unique postcode for the level that can be shared with anyone across all platforms.

Not only does this give players the freedom to create and play levels with friends and family, but it also opens up the ability to share with people via social media and create a whole new level of competition.

Currently, I still need to brush up on my skills if I ever hope to top any leaderboards, but I’ve already had a blast playing some of the awesome creations that other players and the devs have created. Don’t simply take my word for it, though, as you can check this out for yourself when OlliOlli World comes to Nintendo Switch, Xbox Series X|S, PS4, PC, PS5, and Xbox One on Feb. 8, 2022.