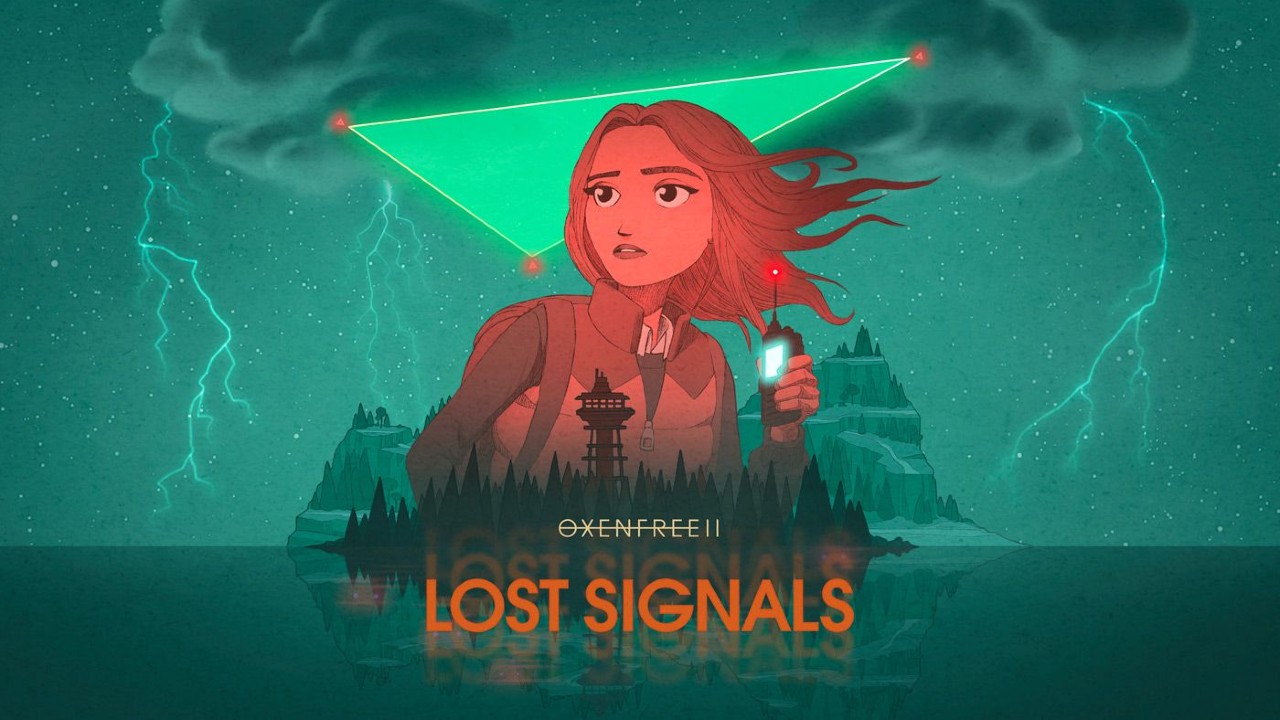 In 2016, Night School Studio struck gold with Oxenfree, as their debut supernatural adventure game was a hit with fans thanks to its quirky characters, unique dialogue mechanics, and enthralling mysteries. Five years later, the studio hopes to pick up right where it left off with Oxenfree 2: Lost Signals.

Recently, I attended a preview event for the game that detailed all of the features and gameplay elements players can expect in Oxenfree 2: Lost Signals. Across that hour and a half, it was clear that the sequel wants to build upon the success and foundation laid by the original while also trying to set itself apart via new mechanics.

Five years after the first game’s events, Oxenfree 2: Lost Signals follows Riley, an environmental research returning to her hometown of Camena to investigate mysterious radio signals. It isn’t too long before she figures out that a sinister group known as Parentage is trying to open up portals similar to the ones that Alex encounters in the first game.

To stop them, Riley has to plant radio transmitters throughout the town that’ll keep these beings from escaping. The demo build that was shown occurred a little bit into the game, as our protagonist has not only run into Parentage but has also found some help of her own in the form of an old high school acquaintance, Jacob.

Together, the pair explore Camina while also talking a little about the events of the game so far while also reminiscing about high school. The dynamic dialogue bubbles from the original is front and center during this adventure, again giving players the option to interrupt or listen to conversations at their own pace.

Talking plays a big part in shaping relationships once again in Oxenfree 2: Lost Signals, as micro and macro conversations and choices affect the ability to talk to certain characters, leading to specific outcomes. For example, in the demo, Riley has the choice to answer or ignore a Walkie Talkie communication from a stranger.

In choosing to answer the call, she’s then greeted with an obscure conversation that might have more meaning with context later on. Shortly after this, a friendly fisherman named Nick Stuart calls, asking Riley if she can look for his blue backpack.

When she agrees, she diverts her route a little to find the backpack and get some fishing lore from Nick that adds to the story and world. This is just one of the many examples shown throughout the demo that showcases how important the Walkie Talkies will be in Oxenfree 2: Lost Signals when it comes to experiencing its story.

According to Lead Writer and Co-Founder of Night School Studio Adam Hines, the Walkie Talkies will be one of the game’s standout new mechanics.

“It is definitely the thing we view as the biggest addition to the communications mechanics. The walkie opens things up. It allows us to engage with people in different places and interrupt different moments.

Having numerous friends/frenemies allows storylines that you can miss. Some of these folks you’ll meet in person, and some will only be over the walkie-talkie. It dramatically changes how people can interact with the story.”

Hines elaborated on this a little further into the demo by explaining that the town of Camena moves forward in real-time as the game progresses. That means if Riley chooses to go to one area to place a transmitter over another, events will continue to transpire and move forward instead of simply waiting for her to arrive and complete them.

“We let the player choose how they want to approach where they place the transmitters. As a result of that, the player thinks about how they are supposed to reach high points.

If they go down one of these paths, the events that are occurring throughout the other areas of Camena will continue regardless of whether you’re there. The more you explore one section of the island, the more time tears will appear.

Exploration takes on a much bigger role this time. The Walkie Talkie affords us the chance to allow the rest of the world to continue while not on the screen with you.”

The demo ended by going into some of the new depths that Oxenfree 2: Lost Signals will explore, as Riley and Jacob use something known as a Time Tear to travel back in time. According to the developers, these anomalies are unnatural fissures in the space-time continuum that allow you to access the same locations at different times.

In this instance, Riley and Jacob use a Tear to travel back in time to when the mine shafts elevator was actually operational. Unfortunately, the cave in occurs right after they use the Time Tear, resulting in a race against the clock to escape.

It is left up to debate as to whether it was the Time Tear that caused the cave-in or dumb luck. Either way, I can’t wait to experience all of the mystery and intrigue that Oxenfree 2: Lost Signals has to offer fans when it releases on PS5, PS4, Nintendo Switch, and PC at some point in 2022.