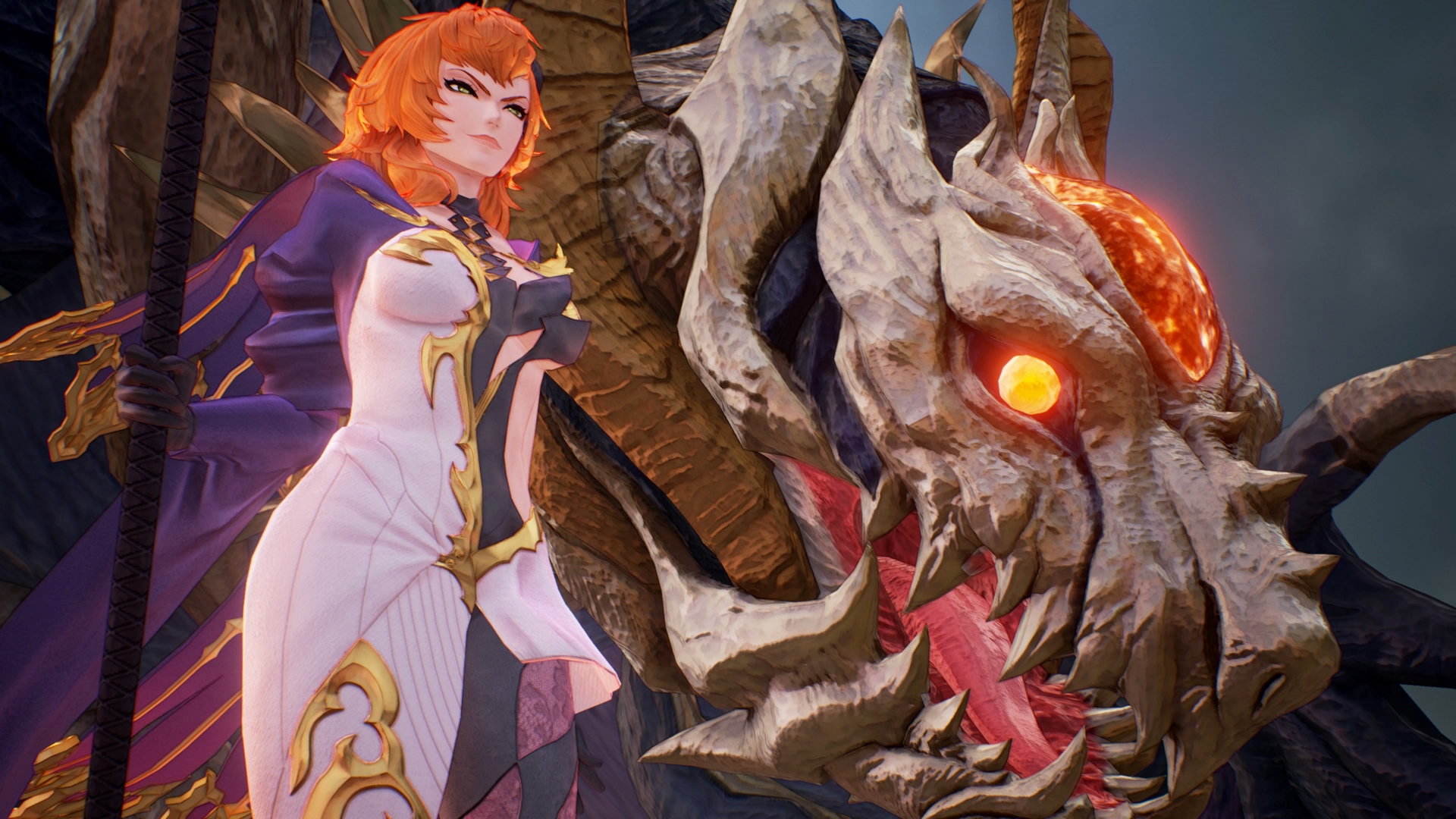 Almeidrea continues the Tales of Arise trend of the Lords being tough to take down. We have some tips if you’re having trouble with this spell caster and her pet dragon. Here’s how to beat the Lord Almeidrea and Mesmald boss fight in Tales of Arise.

How to Beat Lord Almeidrea & Mesmald in Tales of Arise

You’ll want at least two party members with high elemental defense for this one, so that means a mix of Rinwell, Dohalim, and Shionne. Use all three if you want both extra healing and long-range options. Long-range artes are useful here because Almeidrea stands on top of the flying dragon, Mesmald, during the fight.

You’ll also want to equip Opals to reduce Wind and Earth element damage by 50% since this boss pair uses tons of Wind-based moves.

Mesmald and Almeidrea will use a mix of artes and melee attacks at the same time — the dragon will attack mostly physically while Almeidrea casts artes to rain down from above. Rinwell can stop these artes easily in the first phase of the fight if she has her Boost Attack ready, so be sure to save it and pay attention to when the circular purple casting timer appears on the enemy.

Your vision will probably be obstructed most of the time if you use a melee attacker because Mesmald is so huge. It’s inconvenient, but using Alphen’s Boost Attack will work wonders since it grants temporary invulnerability during the attack and interrupts all of Mesmald’s non-Over Limit moves.

Outside of basic swipes with its claws and tail, Mesmald can also summon tornadoes just like the last dragon boss. The catch here is that it summons many more at once, so don’t get caught in between them. If you ever fail to stop it from casting the arte, watch out for green circles on the ground that telegraph beams that’ll shoot up from those spots. And after the ground beams, it’ll shoot one in a straight line from its mouth.

With a quarter of the health bar gone, Almeidrea will infuse Mesmald with energy, and fireballs will start raining from the sky after a short charging period. Stay on the move and watch for shadows on the ground to avoid the attack.

When Mesmald’s health falls below 50%, Almeidrea will start floating above the stage on her own. She’ll constantly cast artes. Unfortunately, she’ll be shielded in this phase, so using Rinwell to disrupt her isn’t an option. Though, you can interrupt her casting with any Mystic Arte of your own if you get lucky with the timing.

Things can get very crazy very quickly when the two are separated because Almeidrea will summon giant tornadoes and use the previously mentioned green ground beam attack all while Mesmald goes berserk by slashing, spinning, and spitting fire while in Over Limit.

Do your best to focus on the dragon’s tail because you’re less likely to get hit when attacking it from behind. Just don’t ever forget about Almeidrea’s artes.

Once Mesmald’s health gets even lower, Almeidrea will stand on its head again and charge her Master Core. The party members will verbally make note of this and that’s when you’ll need to deal as much damage as you can while the boss pair charges its Over Limit attack.

After a short wait, press Rinwell’s direction on the D-Pad as soon as it pops up. She’ll stop the attack and down both enemies for you to finish them off.

However, if you miss the prompt, giant tornadoes will appear and cover nearly the entire battlefield. Trust me, you do not want this to happen — it can wipe your entire party depending on your health bars and the difficulty settings.

This boss fight is another troublesome one, but that’s everything you need to know about how to beat Lord Almeidrea and Mesmald in Tales of Arise. Be sure to check out our guide wiki for the game to find more tips, tricks, and other boss guides if you’re looking for some extra help.