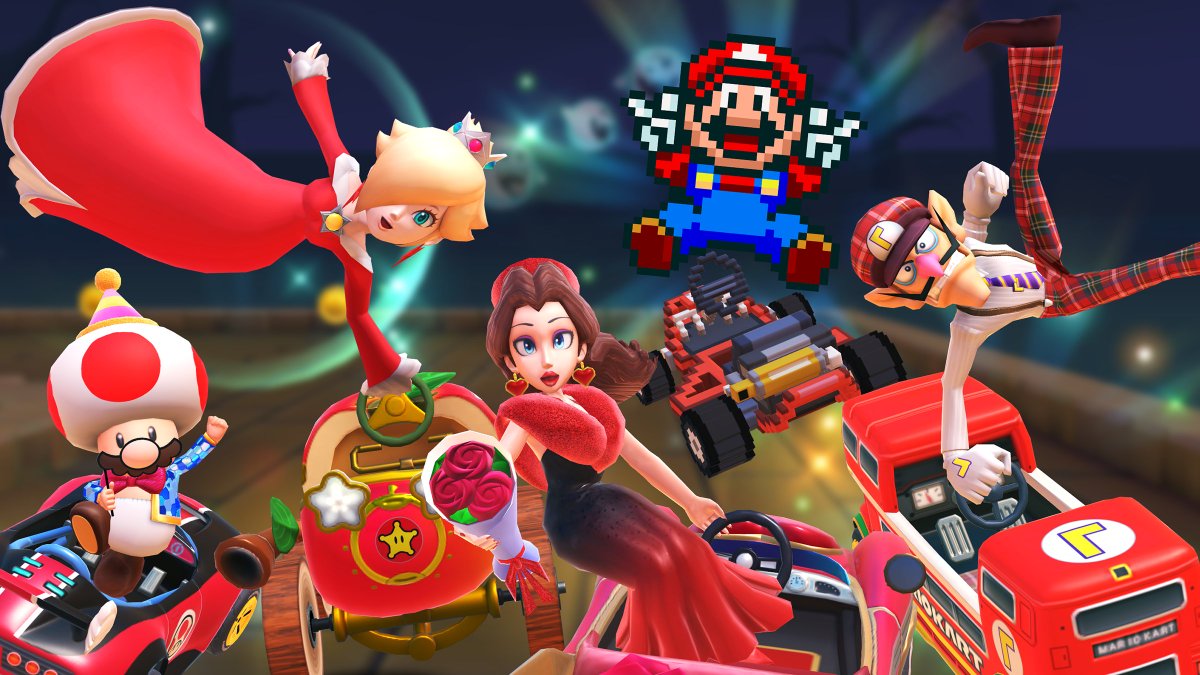 Last week saw a brand-new, never-before-playable character within the Mario Kart series debut in the rather successful Mario Kart Tour. This character was none other than the most prominent of Magikoopa, Kamek.

Kamek was originally supposed to debut in Mario Kart 64, 25 years ago. Instead, Donkey Kong took his place on the roster, and poor Kamek has been in Mario Kart limbo ever since. That was until this week of course, as he was added into Mario Kart Tour.

We have come up with a list of six characters more than overdue of having themselves added to the ever-expanding roster of racers within the Mario Kart series.

These characters are generally thought of as being together ever since the latter’s first appearance in a Mario game courtesy of the Nintendo 3DS game Super Mario 3D Land. While Pom Pom is relatively new to the Mario-verse, Boom Boom has been around almost since the beginning, debuting in Super Mario Bros. 3 as a common boss in the fortresses of the game.

It only made too much sense for Nintendo to create a female counterpart to Boom Boom, and that is where Pom Pom entered into the picture. While Boom Boom stomps around, occasionally also seen flying at times in the 2D games, Pom Pom carries around a large shuriken, tossing it at her opponents. She can even produce fake versions of herself to trip up her enemies as well.

Pom Pom and especially Boom Boom are more than deserving as additions to the Mario Kart roster. We’ve seen the Koopalings, who also debuted in Super Mario Bros. 3, arrive in the series with Mario Kart 8 while poor Boom Boom hasn’t gotten much representation at all in Mario spin-offs at large. In fact, his first major playable appearance in a spin-off was as a DLC character in Mario Tennis Aces on the Switch. A long time to wait, for sure!

Both Boom Boom and Pom Pom would make great additions to Mario Kart, serving as heavyweights most likely, and seem long overdue (again, especially Boom Boom) to join up with the likes of Mario, Luigi, Peach, Yoshi, Bowser, and more on the Mario Kart roster.

Save for a cameo appearance in Mario & Luigi: Superstar Saga, Professor E. Gadd is rarely seen outside of the Luigi’s Mansion series. This needs to change, as the creator of the Poltergust vacuum our cowardly but loveable hero uses to vanquish ghosts and specters is more than deserving of a spot on the tour.

Despite there being a kart based on the Poltergust in the Nintendo DS iteration of the Mario Kart series, Professor E. Gadd was nowhere to be found in Mario Kart DS itself. That seems like a missed opportunity, but there’s always a chance to make things right by having the good professor join up with the Mario Kart cast as a driver.

Even if it’s simply in Mario Kart Tour, which we’ve already seen has no problem adding a robust lineup of never-before-playable characters to its roster, Professor E. Gadd would be a lovely addition. He could even join during an upcoming Halloween-themed tour for the game, as that would be the perfect time for the professor to make his arrival on the roster and invent some new ways to win on the racetrack.

While this surly and elderly member of the Kong family is more thought of as part of the Donkey Kong Country line of games, both the Mario and Donkey Kong franchises have crossed over numerous times in the past. After all, Mario Super Sluggers on the Wii saw Diddy Kong, Dixie Kong, and even the Kremling villain King K. Rool join its lineup of baseball players.

Mario Kart Tour, too, has had no problem having members of the Kong family join up for some radical racing action, including Diddy Kong, Dixie Kong (who made her first appearance in the Mario Kart series with Tour), and Funky Kong (who was previously playable in Mario Kart Wii).

Therefore, we have to wonder what the hold up is with having the senior member of the Kong family join the Mario Kart fun. We know Cranky Kong would rather wax nostalgic and unload on us with tales on how “back in his day, Mario Kart used Mode 7 graphics, and not these fancy-schmancy 3D graphics”, but Cranky is no stranger to being playable ever since a major co-starring role in Donkey Kong Country: Tropical Freeze. C’mon, Cranky. Take it to the fridge–err, racetrack!

Ever since Super Mario Kart, Nintendo has had no problem allowing Bowser’s forces to join in on the rambunctious racing mayhem. We saw that with the addition of a basic Koopa Troopa to the original Super Mario Kart roster.

Mario Kart Tour has only further allowed Bowser’s forces to see themselves be promoted from routinely getting stomped on by Mario to taking a trip to the driver’s seat for some wild Mario Kart races. Obviously, there’s the previously mentioned recent arrival of Kamek, but there have also been the additions of the Hammer, Ice, and Fire Bros to the roster.

One character who recently appeared as playable for the first time in a major role in a Mario spin-off is Chargin’ Chuck, who showed off his impressive skills on the links in Mario Golf: Super Rush. Prior to that, he’s been mostly in the background as a formidable foe Mario encountered in his adventures in Dinosaur Land in Super Mario World and the Sprixie Kingdom in Super Mario 3D World.

Ever since the Western version of Super Mario Bros. 2 was released, we haven’t had too many nods to the game in the Mario universe. Sure, there are remnants of the game through characters such as Shy Guys and Snifits in the Yoshi series (and of course the main breakout star from SMB2, Birdo), but other than those foes, there aren’t too many callbacks to one of Mario’s most interesting adventures.

With that in mind, it would be even more interesting to see the re-appearance of one of Mario’s oldest foes. Though only making one major appearance in the Mario series as Super Mario Bros. 2’s final boss (not counting ports and remakes like Super Mario All-Stars or Super Mario Advance), Wart really did make a lasting impression.

If one-off characters like Honey Queen from Super Mario Galaxy can make an appearance in a Mario Kart game, why can’t a more prevalent character like Wart? Of course, we realize Honey Queen’s addition to the roster was more because Mario Kart 7 was coming off the recent enough release of Galaxy, but it’d be a great throwback to see the return of Wart and in a Mario Kart game at that. If Birdo, as lovely as the character is who is also from SMB2, can make multiple Mario series appearances since, why not Wart as well?