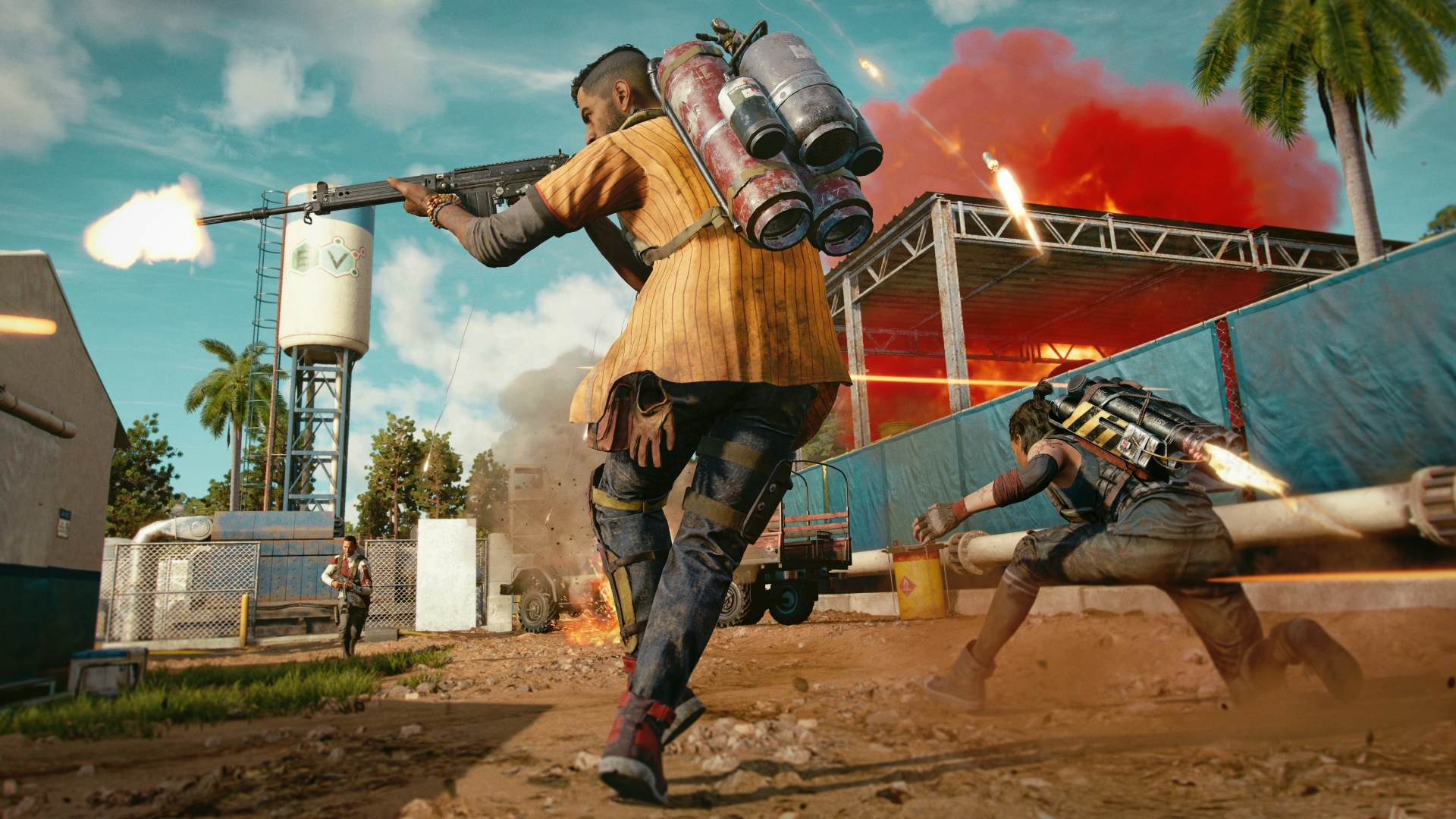 Far Cry 6 is absolutely chaotic in the best ways possible. I got the chance to attend a five-hour-long preview event, and I don’t know about anyone else’s experience with the game, but my plans and ideas on how to tackle the missions nearly always failed me. And when they did, I had to improvise through the chaos that ensued. There was rarely a dull moment.

This is Ubisoft’s latest entry into their long-running FPS franchise that’s known for compelling villains and wild, over-the-top narratives and gameplay. Judging from the preview, it won’t disappoint on either of those fronts.

The bulk of the preview gave me free rein to explore the nation of Yara as I took on missions in any way that I saw fit while aiding in the rebellion against the dictator and main villain, Anton Castillo, as a member of the Libertad guerrilla movement.

Castillo has manufactured a substance called Viviro that’s highly effective in treating cancer, but he uses slave labor while destroying the land to do it. This is where protagonist Dani Rojas and the various factions at play in Yara come into the picture. And as a protagonist, Dani feels more alive and real than any other in the series thanks to the switches to third-person whenever they interact with other characters in cutscenes.

Seeing Dani physically touch other characters and having an idea of what expressions they’re making while speaking does wonders for immersion and engagement in the story.

Outside of the cutscenes, one of the very first things that I noticed when dropping into the game was the size of the map — it’s massive. It’s also marked with enemy locations to be taken over and friendly factions to be recruited to your side.

Many of the factions mentioned above occupy their own region of the map. They need to be convinced of your loyalty and brought together through the completion of missions that aid in their causes.

Well, it’s really all one cause — free Yara from Anton Castilo — but each faction leader has different methods and ideologies on how to get to that goal. In that same vein, I was always given several different options when it came to tackling the challenges presented to me.

The missions often culminated in some crazy and unpredictable gameplay segments because of the actions I took, despite my best efforts to plan ahead and take enemies out as quietly as possible. In one instance, I attempted to steal an enemy tank from their base before anyone could notice me.

Instead, I was spotted and shocked to see an enemy soldier enter another tank that I somehow didn’t notice when I scouted out the area. I would’ve been dead in that scenario without the new “Supremo” weapons in Far Cry 6.

Supremos are basically customizable special attacks that recharge as you defeat enemies. Throughout the game, Dani uses “Resolver” skills to create makeshift weapons, and the Supremo is one of them. As an example, the Supremo I used to take out the tank was basically a rocket launcher strapped to Dani’s back, like the one in the clip below.

I tried (and failed) to get everything done stealthily with suppressed guns and gear that made me harder to detect. I wasn’t too successful early on — as you can clearly see above — but started to get the hang of things about halfway through the preview.

Situations like the one above are usually avoided with more thorough planning. It took me a while to understand which enemies to watch out for and how to efficiently take down the ones that should be targeted first. Scouting out an area with your phone will tag enemies and let you know which rounds and tactics to use on them.

Planning becomes a huge part of the game, and Far Cry 6 adds deeper customization to the series with a good amount of weapon mods like multiple suppressors, grips, different types of rounds, and other attachments. There are also clothing options with stat bonuses and gear that provides passive buffs.

One major main mission in the preview tasked Dani with infiltrating an enemy stronghold to steal depleted uranium. Yes, uranium. The stronghold was on the edge of the sea, so after messing up my plan to parachute in from above, I swam into an alternate opening in the fortress that came with its own problems.

That mission devolved into a regular shootout, of course, but I learned a bit from my mistakes until I gradually started to create my own controlled chaos.

Obviously, failing with plan A isn’t ideal. But in this game, the beauty of it is that you find new, creative ways to accomplish your goals out of necessity. I eventually learned that going completely silent isn’t always ideal. So if things are going to get wild, why not make the chaos work for you?

Animal companions called Amigos are especially useful for this. I’d often send out my crocodile friend, Guapo, to cause a distraction by terrorizing small groups of guards as I snuck around and flanked or finished up mission objectives.

Creating environmental hazards also works in the same way. Burning Castillo’s Viviro plants with a flamethrower causes a wildfire to spread that releases toxic chemicals in the air, for example. Wear a gas mask and watch enemies struggle to contain the problem you’ve just caused as you casually finish up your main objective.

There are so many ways to approach the problems presented and, sometimes, all it takes is a little bit of creativity to get out of sticky situations.

This aspect of creativity becomes doubly true when playing with a friend. I was able to try the game in co-op as well, and coordinating with another person made things go much smoother. Having someone to rely on took a bit of the difficulty out of the missions, but they were still fun regardless.

Co-op partners can drop in and out of the host’s game while still keeping their progress and gear that they earned solo. While missions feel great in co-op, exploration can be tricky because partners can’t leave each other’s side for too long. If they do, the visitor will be teleported back to the host when they get too far away.

And, once again, I only know this because of a chaotic situation. My partner and I got shot out of a helicopter and landed in completely different locations after parachuting down to the ground. It’s not a huge issue, but just something to be aware of if you’re the type of co-op partner to get easily distracted and wander off alone.

Far Cry 6 has plenty to offer when it comes to playing exactly how you want. Want to sneak past enemies and complete objectives without conflict? You can do that. Want to make your presence felt and go loud right from the start? You can definitely do that. Or you can mix it up with a bit of both styles.

And within those styles, you’ll find several ways to get the job done to your liking with various weapons, plans of action, and routes to your goal made available. The choice is up to you, and that’s what stuck with me as the best part about Far Cry 6 in this five-hour preview.

If you’re interested in picking the game up for yourself, you can do so when it launches on Oct. 7 for PC, PS4, PS5, Xbox One, Xbox Series X|S, and Stadia.