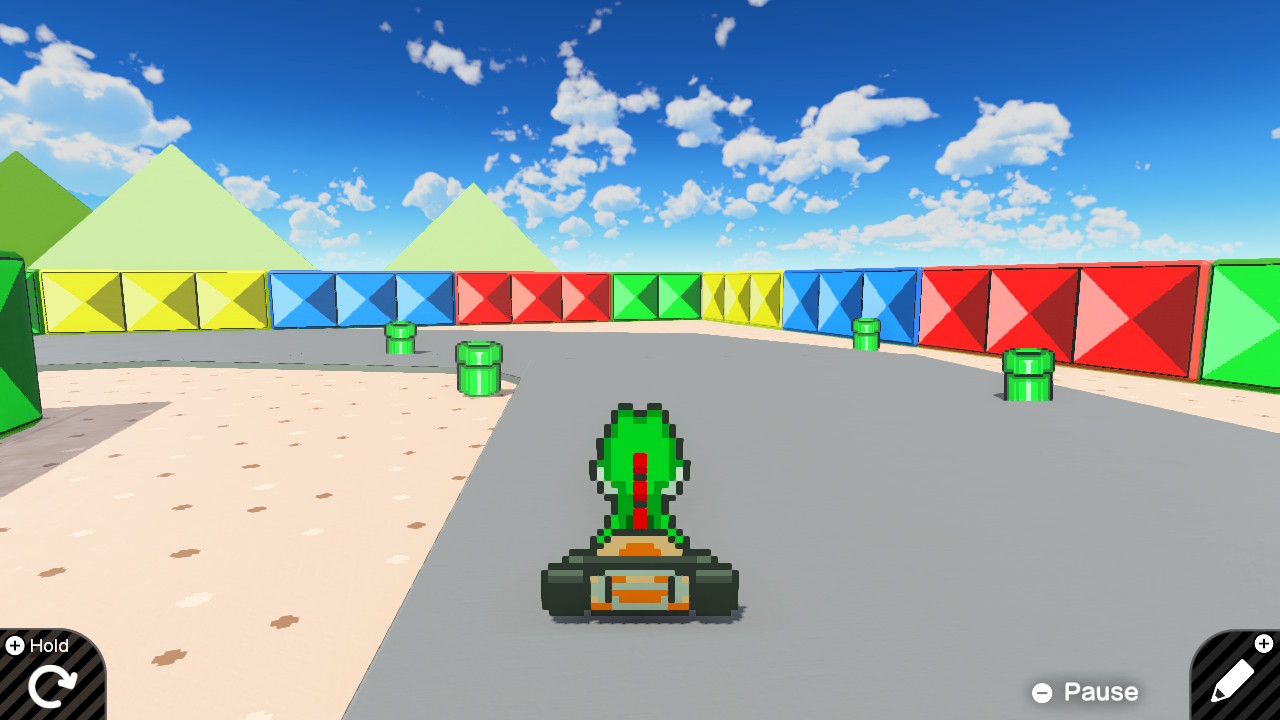 The software has introductory lessons for people who are brand new to designing games, but there is also a free programming mode to allow more experienced designers to let their creativity run wild. Even though Game Builder Garage is only a few days old, we’re already seeing incredibly impressive user-created games appearing.

Many players are having fun recreating their favorite games in Game Builder Garage and even adding their own twist on them. It’s truly amazing what people can create in such a short time given the creative tools to do so.

Here are a few of our favorite user creations in Game Builder Garage so far.

Remember Nintendogs from the days of the DS? Twitter user ichirin_anemone decided to recreate Nintendogs within Game Builder Garage.

It has adorable dog who runs around the room performing tricks, and you can even play with it using a toy. If dogs aren’t your preferred animal, the creator made it so you can replace it with a cat or a horse.

If you’d like to try ichirin_anemone’s Nintendogs on Game Builder Garage, the game ID is G 004 5JR 906.

Another throwback creation is the Game & Watch game “Ball” that LeavingLuck created in Game Builder Garage. It works exactly the same as the original in which you must juggle the ball as many times in a row as possible by moving the character’s left and right hands.

In the tweet, you can even see the programming that went into this creation. The game ID to play this creation is G 008 JD0 GJR.

This next creation in Game Builder Garage is a lot more fast-paced. MrTiffles on Twitter recreated DOOM Eternal.

They show off some of the gameplay in the video, in which you can see it’s a first-person perspective shooting some of the characters as they fire back at you. There are also platforms to jump on and hide behind.

The game ID of the build you see here is G 000 2HV VLG, but MrTiffles also says there is an improved build of their game you can play by using the ID G 002 CYJ CW1.

ZeldaBoi1 has been hard at work recreating a few of their favorites games with the Game Builder Garage. This first one is Super Mario Kart. You can use A to accelerate and ZR/B to drift as you race around the course.

You can even toggle between different racers by using the L/R buttons. All eight of the original racers from Super Mario Kart are in their version of the game.

You can control Pac-Man to collect the pellets while the ghosts chase you. It might not be anything remarkably different from the real Pac-Man game, but hey, it’s pretty impressive that a single person was able to recreate it using such rudimentary tools.

Voxybuns decided to create a touch-screen air hockey game in Game Builder Garage. The cool thing about this one is that there is an AI opponent to play against.

The game will keep track of your score. There doesn’t seem to be a game ID for this one shared just yet, but it looks like Voxybuns is giving updates on the progress of the project on his Twitter.

ZeldaBoi1 created more than the Super Mario Kart we saw earlier; they also have been hard at work on a recreation of Excitebike. This objective here is to complete two laps without falling in the mud. You use A/Y to accelerate and B to jump.

You can clearly see how much time went into the bike sprite and course design. You can use the game ID G 002 91N DF7 to play this creation.

SightSeekerAnim is a big fan of the Paper Mario style, so they recreated an area of Paper Mario for the Nintendo 64 in Game Builder Garage.

Right now, it’s just a test area, but you can see how much love went into designing the Paper Mario sprite to look just like the original, as well as environment objects like question mark blocks that break when you hit them.

There’s no game ID for this project just yet, but stay tuned on SightSeekerAnim’s Twitter to hopefully see more.

A Shooting Game by Masahiro Sakurai

Even Masahiro Sakurai, the creator of the Super Smash Bros. and Kirby series, is getting in on the Game Builder Garage fun. Here you can see that he created a little shooting game using the software’s tools.

Sakurai described how to play his game in the tweet, but didn’t give us a game ID so we can play it ourselves! Hopefully, he shares it with us so we can enjoy his creation. It’s pretty fun to see what an expert game designer is up to in this software meant for beginner programmers.