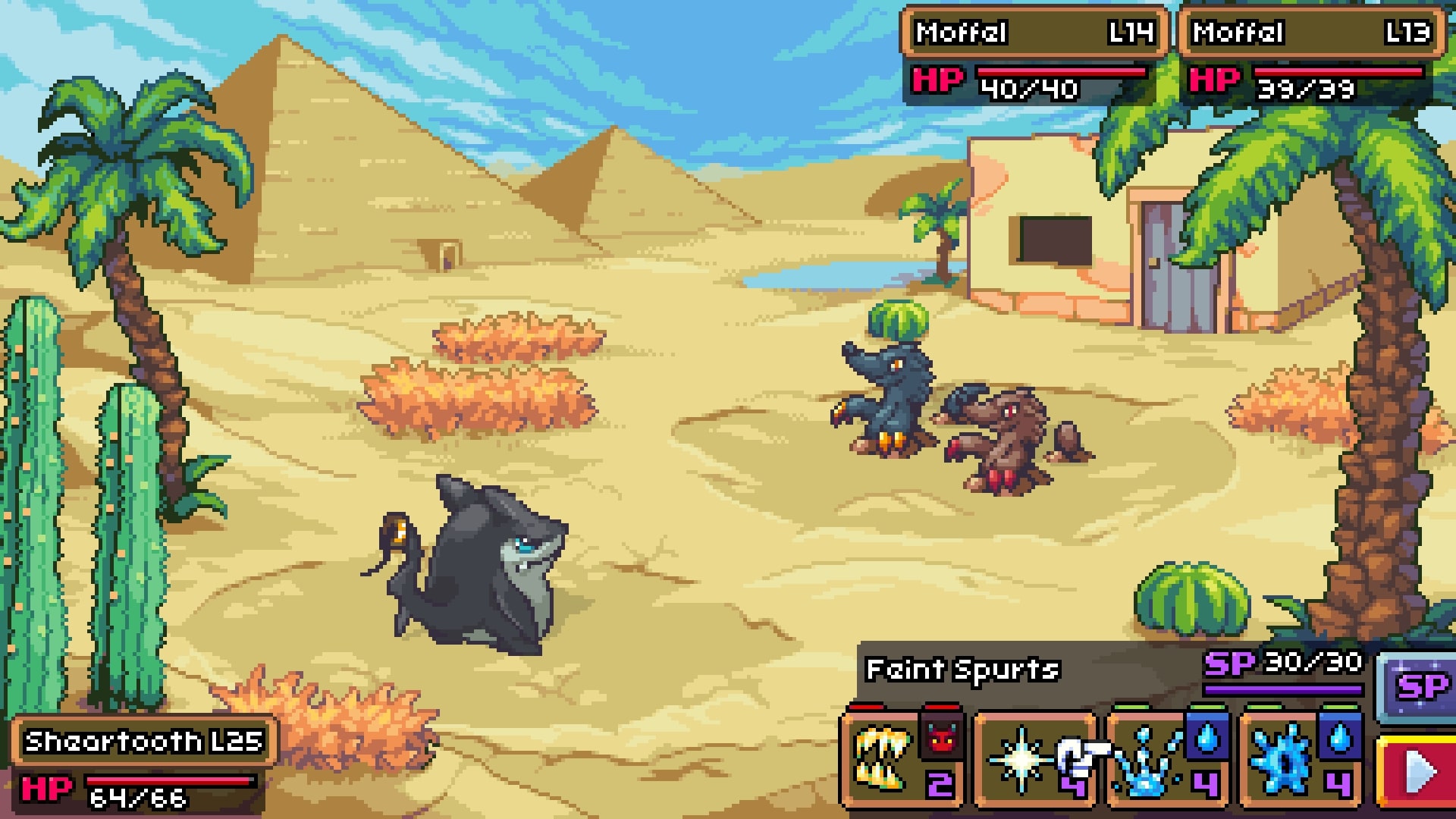 Coromon is a new RPG that’s confidently stepping foot in the monster tamer/creature collector genre. And it’s doing this by modernizing well-known elements of GBA-era games while adding its own unique gameplay elements and design choices.

Coromon’s storyline has you assume the role of a young hero who joins a futuristic organization called Lux Solis. You start out as a Battle Researcher and are soon put on a special task force. Your goal is to research the effects of Titan Essences by traveling across the region of Velua and challenging the six Titans.

There are over 120 Coromon to catch and collect on this journey as you venture through various different climates and Titan dungeons.

I didn’t get to see much of the story in this build, but there was plenty of gameplay to experience. The game offers a level of freedom and customization that just isn’t found in many other games in the genre.

Early on, this freedom includes simply being able to select a difficulty, and having satisfying character creation options. There are four difficulty levels: Easy, Normal, Hard, and Insane. The hardest difficulty treats your playthrough like a Nuzlocke run by releasing Coromon once they’ve fainted and only allowing you to catch one Coromon in each area.

And as for character customization, some of you may be happy to know that it goes beyond the initial creation, allowing players to change clothes, hairstyles, and more even after starting the game. New clothing options and accessories can be found throughout Velua, and they can be equipped at any point on the overworld.

As you progress, the game even allows and encourages you to really personalize how your Coromon are raised through an in-depth feature called the Potential system.

When a Coromon gains experience, they also raise their Potential meter. Filling that meter and “awakening potential” provides extra stat points that can then be distributed manually to the creature’s HP, SP, Speed, Attack, Defense, Sp. Attack, or Sp. Defense. With this feature, players can create glass cannons, tanky masters of defense, a balance of both, or other creative roles.

And the system goes even further. Coromon all have Potential scores that range from one to 21 and are separated into three ranks: Standard, Potent, and Perfect. A Coromon with a better Potential rank and score will awaken their potential more often, and the ones with the highest potential can often be seen visually, as they look different than the regular Coromon of the same type. For example, a Potent Sheartooth is black while a Perfect one is bright blue.

Now, moving on to what goes on inside of battles. The game’s battle system feels familiar if you’ve played any Pokemon game ever, but it also brings its own fresh take. As you’d expect, you can create a squad of up to six Coromon at a time. Each creature has specific passive Traits along with type advantages and weaknesses. There are 13 types in total, which include Air, Cut, Electric, Fire, Foul, Ghost, Heavy, Ice, Magic, Normal, Poison, Sand, and Water.

The standard four-move format is used here as well. Here’s a bit of a twist though — a Coromon’s full list of moves can always be checked outside of battle, including moves they don’t know yet. And, as long as you’re not in the middle of a battle, moves can be switched in and out whenever you want as long as they’ve been unlocked through leveling up. This means that move sets can be fully customized as well, depending on what your squad needs for each situation.

In battle, each move uses a set amount of SP. It’s a lot like having a mana or magic meter in a fantasy RPG. Both HP and SP can be replenished by using items like Cakes. There are also items that can be held for different effects — healing or otherwise. And if you’re low on items, you can even rest for a turn mid-battle to regain SP.

Coromon shows plenty of promise, from its overall freedom of customization to its deep gameplay mechanics. This is definitely one that you’ll want to keep your eye on if you’re a fan of the monster tamer/creature collector genre.

If you’re looking to try the game out for yourself ahead of its early 2022 launch, you can download the demo right now on Steam. It’s about five to 10 hours in length, and it’ll really give you a feel for what Coromon is all about.

Coromon is being developed by TRAGsoft, and it’ll be launching on Nintendo Switch and PC in Q1 2022. In addition to playing through the E3 demo, Twinfinite also interviewed the lead developer and the story writer, so you can read that conversation right here for some additional info.