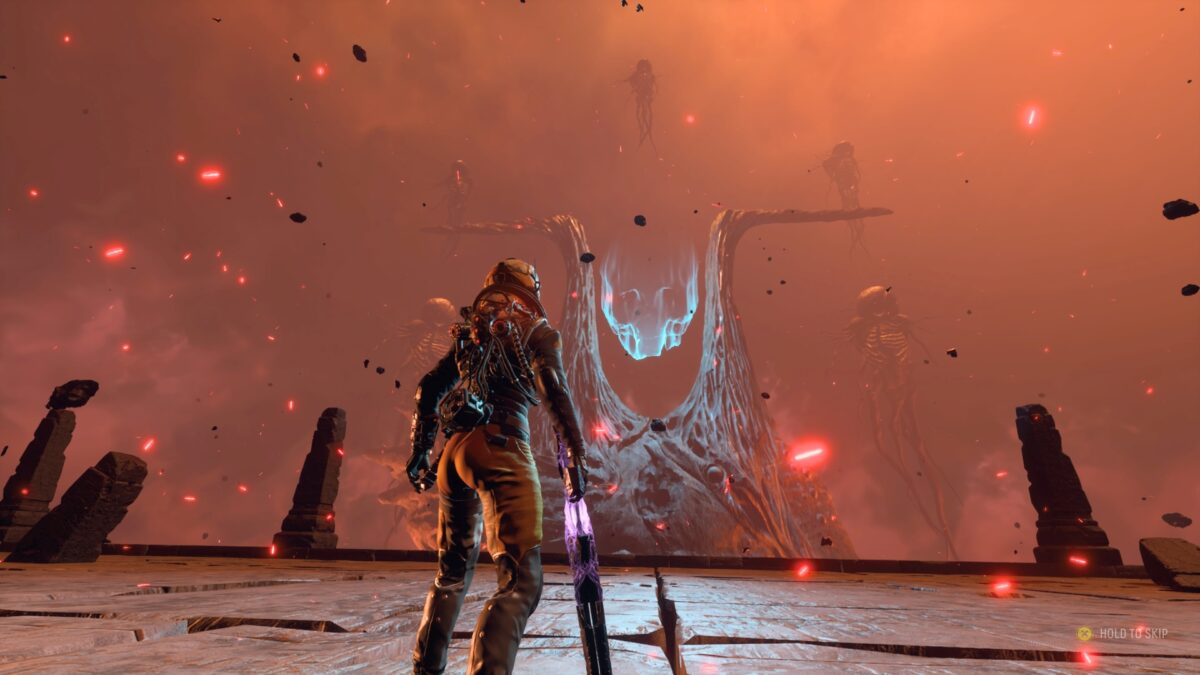 All of Returnal’s bosses are tough, but things start to get really crazy with the one found at the end of the third biome. We’re here to help if you’re having trouble with this menacing fight. Here’s how to beat the Nemesis boss battle in Returnal’s Derelict Citadel biome.

How to Beat Derelict Citadel Nemesis Boss in Returnal

Unlike Phrike and Ixion, you have absolutely no choice but to use a long-range weapon in this fight. Nemesis is a giant floating being that is often well beyond the range of weapons like the Spitmaw Blaster shotgun.

Try to get your hands on a Hollowseeker with Serrated Projectiles and Waves, a Tachyomatic Carbine with Leech Rounds and Hardened, or even a Modified Sidearm with Homing Missiles. Alt-fire options that home in on enemies or zoom in for long-range shots, like Trackerswarm or Killsight, are your best bets here.

Nemesis is unlike any of the boss fights before it, as it’s not immediately clear where to shoot. Aim for the glowing red area in its body, right under the blue glowing skull. Keep that trigger finger down as you dodge everything it throws at you.

Never find yourself standing still. You should constantly be moving, avoiding as much as you can with dashes, jumps, and strafing.

This phase isn’t too bad compared to what’s coming up. Nemesis shoots blue energy balls that track you, so strafing one direction then dashing through them into the opposite direction once you run out of space should keep you safe.

It also has floating skeleton-like creatures surrounding it that act like turrets. Sometimes they’ll move closer to the platform to shoot sweeping yellow lasers that you’ll need to dodge through since they go across the entire area.

This is where things start to get a bit hectic. The main platform will break up, and you’ll need to use the Icarian Grapnel to get to the small rectangular platform directly in front of Nemesis whenever it moves.

Two skeleton turrets will start shooting you at once in this phase, and their lasers will also create rings of energy on the ground that you’ll need to jump over or dodge through. Jumping might be the best option to preserve your dash for faster-moving attacks.

The main body will continue to fire different colored orbs while all of this is going on. The only time you should stop strafing is when those turrets use their lasers to create the ground waves.

This phase turns things up a notch yet again. Nemesis is extremely far away from you at this point, which means it’s time to use the Icarian Grapnel once again to close the gap. Tiny square platforms will appear out of nowhere, so keep your eyes open for any opportunity to zip to the next one. The one your on will constantly fall until it breaks. Go from one to another as quickly as possible.

While you’re doing all of this platforming, Nemesis will shoot purple homing pellets, orbs, and lasers at you from a distance. Try to use the platforms as cover, and remember, zipping to a new platform will cause Nemesis to miss more often than not because you can’t be hurt as you grapple.

Once you’re in front of Nemesis, the attacks are still the same, but closer, meaning you’ll need to dodge much more often. Your platform will still fall, though, so look left or right to find a new one when it looks like Nemesis is rising above you.

The platforms aren’t always level, as they tilt slightly. This allows you to even use the one you’re on as cover if you move back a little bit as projectiles come at you.

That’s everything you need to know about how to beat the Nemesis boss battle in Returnal’s Derelict Citadel. This is a hard one, but you can manage if you use good movement and grapple at the right times. Check out our guide wiki for the game for more tips, tricks, and other info.