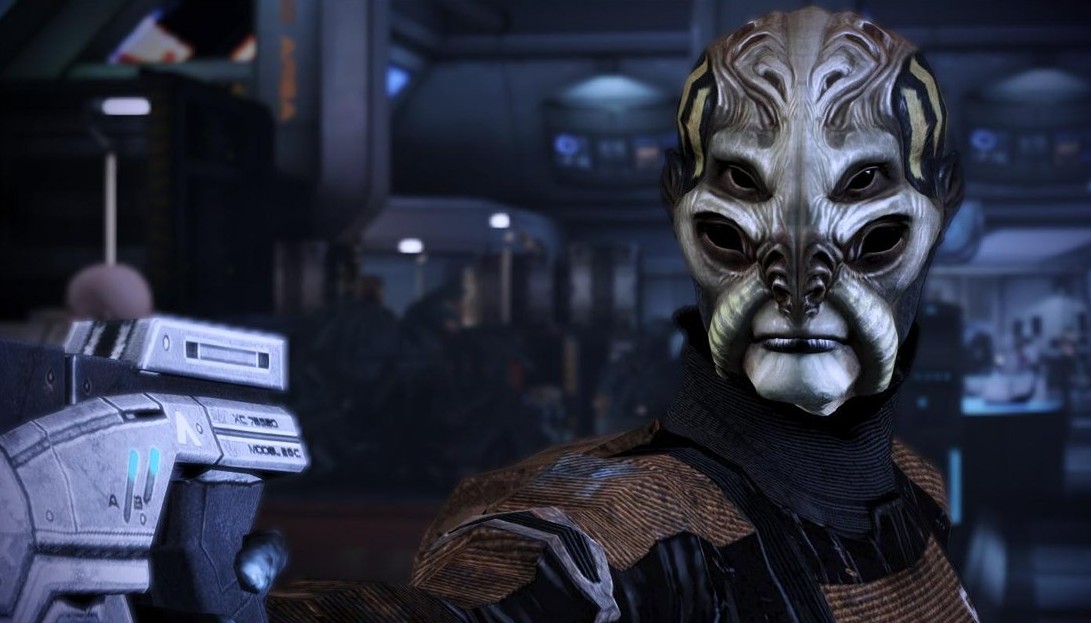 The Batarians have always been a troubled group in the Mass Effect universe, as their species tend to get stereotyped as being thugs and pirates. The Bring Down the Sky DLC doesn’t really do this race any favors either, since its main antagonist is a terrorist named Ka’hairal Balak. Here is everything you need to know on if you should fight or free Balak in Mass Effect 1.

After Shepard receives a mission to help save Terra Nova from an asteroid, they eventually find out that the comet has been rigged with fusion torches by a group of Batarian terrorists. When confronted, the group’s leader, Balak claims that the human colony of Terra Nova rightfully belongs to the Batarians.

To try and keep Shepard from thwarting his plans, Balak reveals he placed a bomb in the offices where the engineers of the station are being held. This presents players with the choice of either attacking Balak to ensure his death or letting him go free in order to save the hostages.

Completing one means that the other will occur no matter what. You’ll also receive the same reward regardless of the outcome, which is a choice between Human Light Armor, Human Medium Armor, Human Heavy Armor, Quarian Armor, or an Omni-tool.

If you choose to fight Balak, he detonates the bomb, killing all of the hostages. Shepard will then get into a firefight with him, with the Batarian taunting him by asking “who’s the real terrorist” now.

After Shepard corners him, you’ll have the option of executing him, leaving him to die, or dropping him off on Terra Nova to be handed over to the Alliance. This is obviously a Renegade heavy option, as it means you’d be sacrificing innocence for the sake of taking down the enemy, even if you did save X57.

Choosing to free the hostages is obviously the Paragon choice to make in this situation, even if it means Balak will end up getting away without any repercussions. When you pick this one, you’ll still need to fight some drones and deactivate the demolition charges before successfully saving the hostages.

When you finally reach them, a cutscene will play with Simon where you discuss the choice to save the hostages. It is also revealed that X57 no longer will hit the colony.

Depending on the choices you made in this DLC, there will be a couple of different situations that can occur in Mass Effect 3 on the Citadel holding docs.

If you chose to fight, Balak is replaced by a Batarian agent Shepard can meet under the same circumstances that mention Balak’s last known rank as Commander instead. If you chose to save the hostages, you’ll meet Balak again. If Shepard never did Bring Down the Sky, he will still show up and introduce himself.

Each situation ends in a confrontation that once again gives Shepard a decision to make. They can either kill Balak with his own gun or convince him to lend his support against the Reapers. The first choice will grant you Renegade points and the second will grant you Paragon points.

That is everything you need to know on if you should fight or free Balak in Mass Effect 1. For more tips, tricks, and answers to your every question, be sure to check out our Mass Effect Legendary Edition wiki guide for more helpful info.