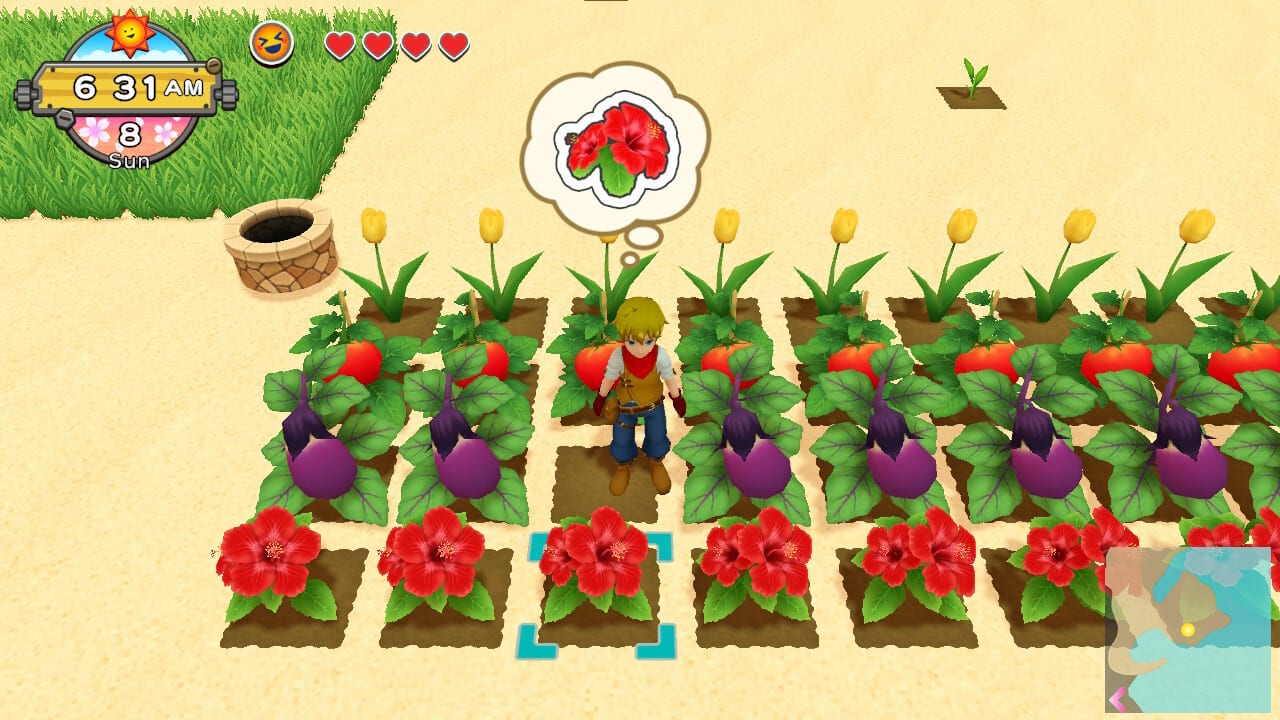 I have had my doubts about how any farming game is going to be able to compete with Stardew Valley. Its release raised the bar so high within the genre, it feels like it’s in the year 3000 and everyone else is still playing catch up. Harvest Moon: One World, however, is taking the wisest possible approach to try to co-exist in the post-Stardew Valley world: by doing something new and different.

In a recent hands-off demo shown to various media outlets including Twinfinite, Natsume showed off what fans can expect when Harvest Moon: One World releases in just under a month on PS4 and Nintendo Switch.

Like its subtitle suggests, Harvest Moon: One World is doing its version of an open-world. The game will allow you to visit five distinct themed areas (such as desert, beach, and snow) each with its own village, townspeople, storyline, culture, and soil. You can freely explore the game’s world and will unlock new towns that you can acclimate yourself with.

While previous Harvest Moon games were primarily about expanding your little plot of land and fitting into a new community, Natsume appears to be putting at least equal emphasis on exploration this time around.

In fact, one of the game’s biggest changes is tied to that pillar of exploration. Instead of purchasing seeds, you’ll need to hunt down wisps (fairy-like creatures) which will gift you seeds that you can then plant in your various farms. You’re not going to be able to rely on short trips to the town’s merchants to get everything you need, you’ll have to get out and explore.

There’s the grasslands of Calisson, the island inspired Halo Halo, the desert town of Pastilla, a village nearby a Volcano called Lebkuchen, and a snowy town known as Salmiakki.

Getting around from farm to farm is made easier via a new item known as the Expando-Farm which allows you to bring your farm buildings (not the crops and tills) around with you from farm to farm. Also, once you’ve visited a location you can fast travel back there, which helps too.

The advatange of discovering all these places to farm crops is that each area has its own unique soil type and will be affected by seasonal changes.

As an example, planting seeds, such as Tomato, in one area, may result in a different mutated crop than one planted in a different area. So in this case, planting a Tomato seed in the snowy area can produce an Ice Tomato.

Natsume is hoping that these changes and shifts in the usual gameplay loop will encourage experimentation. Players are incentivized for exploring the “One World” for wisp seeds, and then planting them in different locations that you have discovered to see what you get.

Discovering and farming these unique crops will reward the player with higher prices at the market and may be linked to certain quests from townspeople as well.

During our demo, Natsume also mentioned that they are making it easier to manage stamina in Harvest Moon: One World in order to make sure players can actually engage in these new features. For example, some wisps and animals are only available after midnight. So expect to be able to do more than you normally would before needing to rest in One World.

In addition to these new changes, familiar features return as well. Players will of course be able to court and marry someone from the game’s various towns.

Every town has one eligible bachelor and bachelorette that the player character can marry, each with their own personality influenced by their town’s culture.

You’ll also be able to mine (with each area featuring different mines), fish, build-up your home and unlock new housing items, and of course progress through a main story.

The demo didn’t show much off the story but it will feature a story that is centered on reviving the Harvest Goddess. The world is without knowledge of crops without her, but before she disappeared she gifted the information people need to farm these crops to the wisps that you’ll be on the look out for throughout the game.

My takeaway after following along with the demo is that I’m glad to see Harvest Moon: One World emphasize new gameplay elements instead of trying to square up directly with Stardew Valley.

The portable farm, hunting for wisps, and experimenting with planting seeds in different areas and during different times of the year sounds fun and is something that should entertain completionists that want to discover every single type of crop in the game.

The competition in the farming and life-sim genre is so much more intense now than when the Harvest Moon series began back in 1996 and has heated up considerably since Harvest Moon (Natsume) and Story of Seasons split into their own separate franchises in 2014.

Between Rune Factory, Story of Seasons, and of course Stardew Valley, players have lots of options and Harvest Moon isn’t the only game in town.

Watching a half-hour or so of someone else play wasn’t enough for me to really get a great feel for whether or not Harvest Moon: One World will stack up with some of the greats.

That said, it did make me feel a lot more confident that Natsume is aware that it needs to step its game up to compete. Harvest Moon: One World’s new features do look compelling and have the potential to meaningfully add to the game’s depth.

We’ll know for sure when Harvest Moon: One World releases on PS4 and Nintendo Switch on March 3. An Xbox One version is planned but does not currently have a release date.