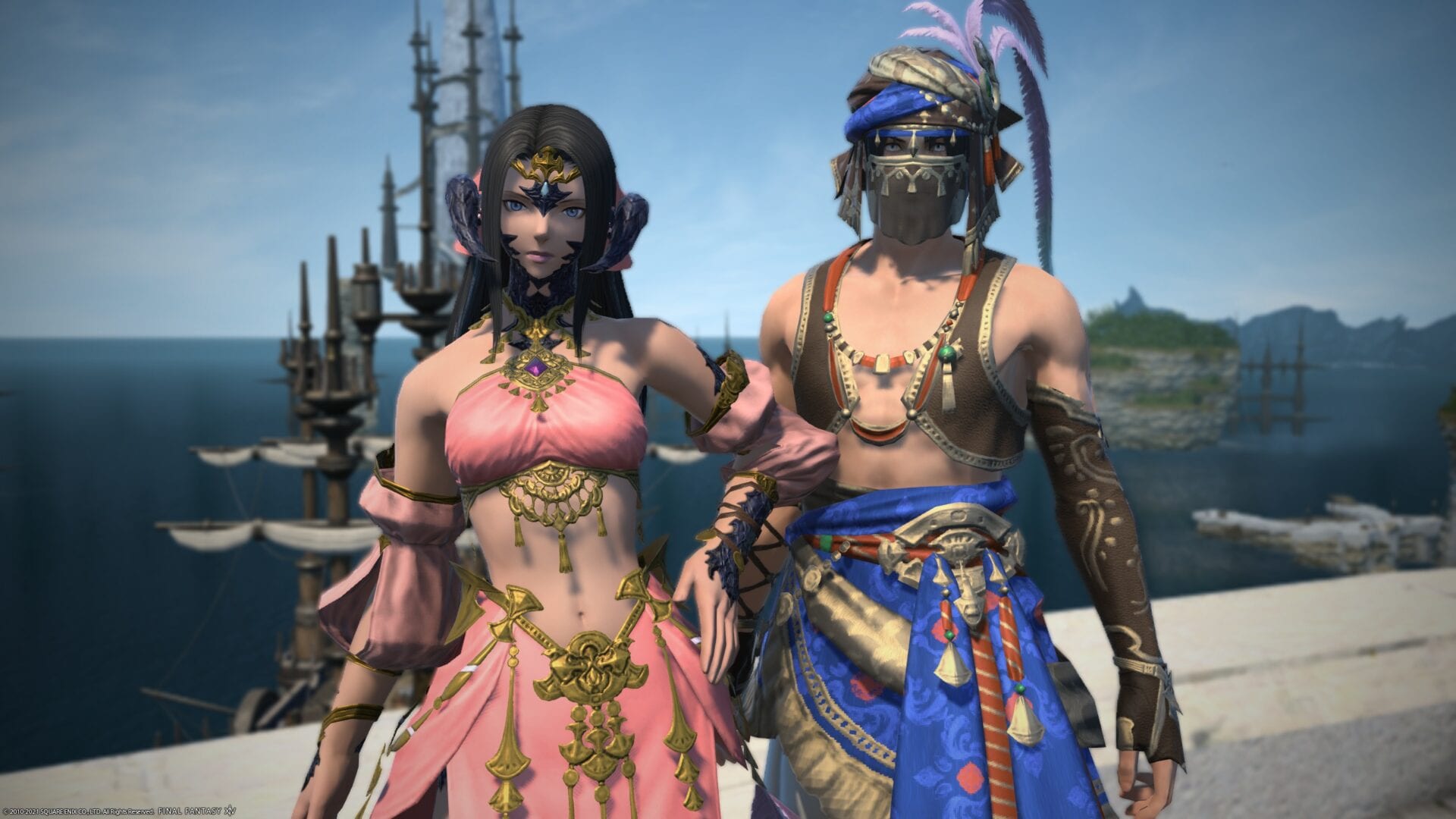 The reveal of the first details of the Final Fantasy XIV’s expansion Endwalker confirmed that players will visit two major locations (on top of the Moon), Garlemald and Thavnair’s city-state Radz-at-Han.

Having been one of the main antagonist forces of the Warriors of Light since 1.0 in 2010, Garlemald is pretty much a known factor, but Thavnair is a lot more obscure, hidden among scattered pages of the lore and the names of items and ingredients.

Yet, due to its mystery and assumed flavor reminiscent of Arabian Nights, it had fascinated roleplayers and scholars of Final Fantasy XIV’s lore for a long time.

Since most of you may not know all that much about Thavnair, I’m going to do my best to provide an overview of what is known, mostly from the two volumes of the Encyclopedia Eorzea, descriptions of items, and a few quests within the game.

Below you can see the art and screenshots that we have seen so far from last week’s presentation. You’ll likely notice that the inspiration from the architecture of Thavnair and its city-state Radz-at-Han isn’t simply Middle-Eastern as many predicted, but also features a lot of influence from the Indian subcontinent.

Perhaps, this was fairly predictable since Thavnair is seen as the homeland of the Dancer job, and dancers fight with a pair of chakram, a weapon of Indian origin.

Speaking of Final Fantasy XIV’s Dancers, the Falsian Troupe featured in the questline dedicated to the job hails from Radz-at-Han. Recurring character F’lhaminn (whom we have known since 1.0) befriended its leader Nashmeira when she temporarily moved to Thavnair.

Below you can see the first cutscene of the Dancer questline, which should give you another taste of Thavnairian flavor.

Another relevant Thavnairian character is Jalzahn Daemir, an alchemist who you can meet in Final Fantasy XIV during the Zenith weapon questline. You can see him below.

Interestingly, the encounter with the Falsian Troupe suggests that the people of Thavnair are very diverse in their ethnic features, unlike what the real-world sources of inspiration for the country could lead some to believe.

Thavnair is an island in the middle of the sea named The Bounty, located between Eorzea and the far Eastern continent of Othard, south of Ilsabard (the continent where Garlemald is located) and north of the Sirensong Sea. That’s why it’s commonly referred to in Eorzea as “the Near East” as opposed to Othard, which is usually called “the Far East.”

The Bounty’s name is quite indicative, as its abundant sea life and central location led the inhabitants of its islands to thrive even during the Umbral Eras and the recent calamity.

South of Thavnair we find Uznair, a smaller island closed to most, owned by House Sener, a family of well-known alchemists.

To the East, the Corvos Narrow separates Thavnair from Ilsabard. According to the legend, an absolutely colossal statue named Anchorite straddled the strait in ancient times. Nowadays, the right foot can be seed on the Northern shore. Funnily, due to this legend, drunken sailors enjoy calling crossing the Narrow “scratching the crotch.” At the moment, we don’t know if we’ll find the left foot on the Thavnarian coast.

The city-state of Radz-at-Han is the most relevant nation in The Bounty, ruling over the island of Thavnair, which is the largest landmass in that sea.

The history of the city-state dates back thousands of years and it’s seen as the birthplace of modern alchemy.

While the city-state doesn’t have a powerful army, its rulers managed to forge a treaty with the Garlean Empire. In exchange for having its independence granted, the Thavnarian nation acts as a relevant trade hub between Garlemald and Eorzea.

On top of that, it’s also the center of exchanges between Eorzea and the nations of the Far East, and its port is basically open to all nations.

This places Radz-at-Han in a neutral position in the long-running war against the empire. When Yugiri’s Doman refugees fleed their country, they tried to seek asylum in Thavnair, but they found the city-state’s gates barred.

Fashion is certainly a relevant way for Eorzeans to experience the flavor of Thavnair. Not only the Dancer’s artifact outfit originates from its city-state, but the Thavnarian set has also been extremely popular among Final Fantasy XIV players (albeit it proved much more widespread among ladies than among gentlemen). Lastly, a dress and a shirt made of Thavnaian wool have proved to be a staple for the fall.

The turtle-like creatures named Adamantoise are also native of Thavnair. Apparently, they were mistakenly imported to Eorzea among a shipment of dodo eggs, testament to the trading inclinations of the Thavnarian people.

Alchemists may also have heard of Thavnarian Mistletoe, which grows on the “stout Acacia trees” found in the island. Apparently, inhabitants of Radz-at-Han believe that two people who meet under said mistletoe must exchange one of their shoes. Don’t ask me. I’m just reporting this.

Other popular alchemical reagents are Thavnarian Resin, Alumen, and Adhesive, while Thavnarian Abrasive is used to forge Nightsteel. Incidentally, Nightsteel armor definitely looks like it could be inspired by a style native to Radz-at-Han

Thavnarian Onions are very popular among chocobos and Thavnarian leather, cotton, and silk are as well-known (and perhaps more) as the wool mentioned above, indicating a rather well-rooted textile tradition.

Giantsgall is a stone found only on Thavnair used to fashion powerful weapons. Its name is inspired by a legendary hero who allegedly killed a giant on the island. The blood of the giant is said to have soaked the land giving the rock its famous durability.

The last piece of the puzzle is certainly represented by the Matanga, a tribe of beastmen that you may have encountered in the Azim Steppe.

They’re actually native of Thavnair, and those found in the Steppe are a herd escaped from the Garlean Empire (where they are not considered people due to their inability to speak civilized languages) under the leadership of Grand Regent Ajana.

Their unusual vocal cords prevent them from speaking ordinary languages, giving them the mistaken fame of being beasts with little intelligence. Yet, this has been proven wrong by Near Eastern researchers who also discovered that the Matanga have extraordinary hearing and communicate with a combination of spoken words and stomps of their mighty feet. Part of the sounds they emit is too deep for other races to even hear. Due to the language barrier, their history and culture remain shrouded in mystery.

The Matanga are primarily herbivore gatherers, but at times they eat salt-laden clay or shale to supplement the minerals lacking in their usual diet. Interestingly, some say that near-eastern Warlords used to employ them as enslaved soldiers by feeding them hay laced with potent alchemical concoctions.

This is pretty much all we know about Thavnair, but as you can see, it has the potential to be one of the most fascinating locations ever introduced in Final Fantasy XIV.

To learn more, we’ll have to wait for the Endwalker expansion, which will release fall 2021. In the meanwhile can check out tons of details and the first official screenshots and art.

You can also take a look at many details about the upcoming 5.5 update.

If you’re interested in the game in general, you can read our latest interview with producer and director Naoki Yoshida, another with composer Masayoshi Soken, and our review of the previous expansion, Shadowbringers.