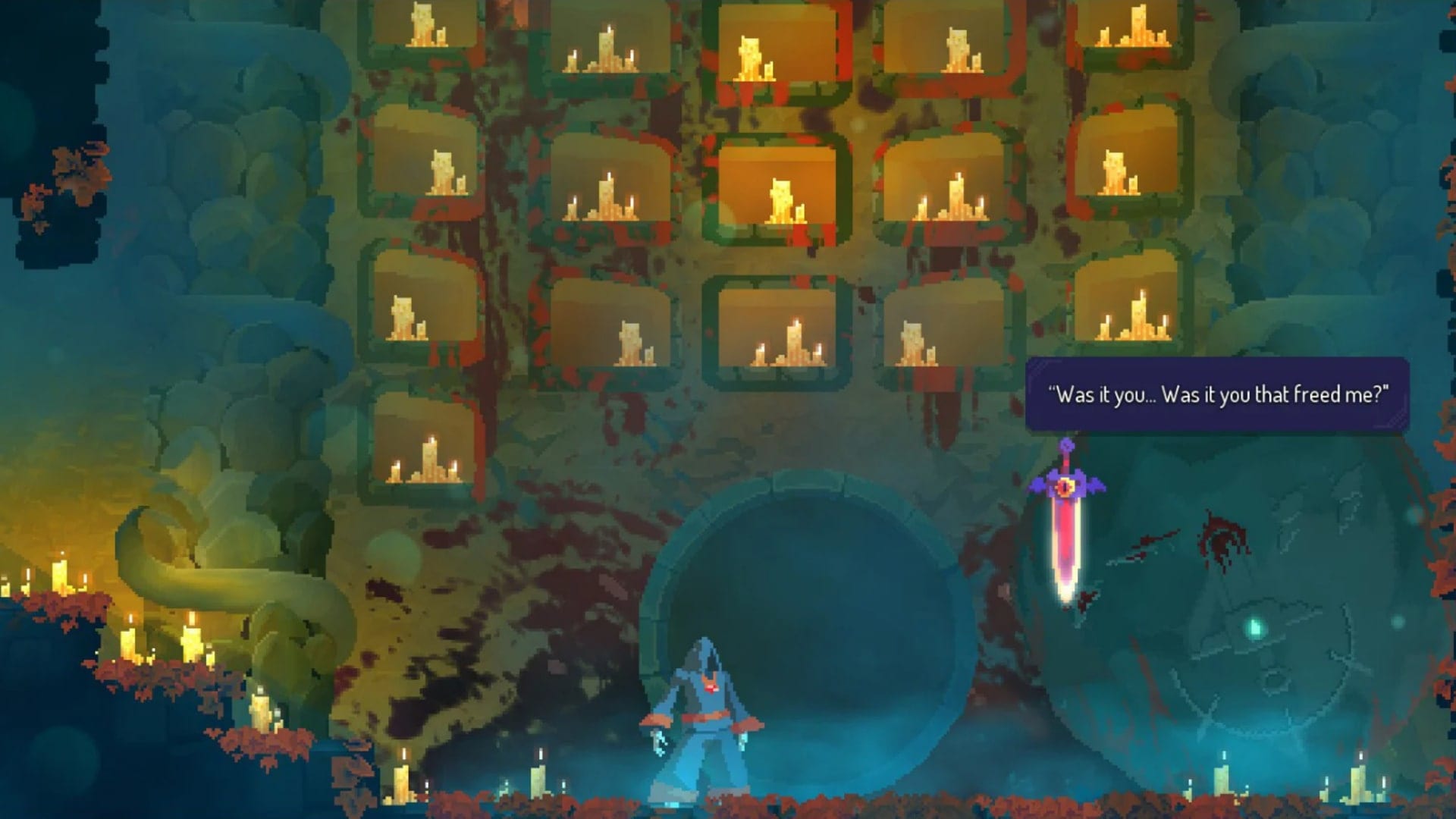 The latest expansion and second paid DLC for the game, Dead Cells: Fatal Falls released last week and we’ve been having a great time exploring all of the new additions.

If you’ve seen the new animated trailer for Dead Cells: Fatal Falls, then you likely know about the new pet sword, Serenade. It’s a great addition to the game, but is extremely easy to miss, so we thought we’d put together a quick guide to help players find the little guy.

First things first, you’ll need to get to the new Fractured Shrines area. Carrying on your run as usual, getting through the first couple of areas until you reach the game’s first boss –either the Concierge, or Mama Tick depending on which path you take.

After beating the first boss, you can get to Fatal Falls’ first of three new areas, the Fractured Shrines. Luckily, this is as far as you need to go in order to find Serenade. Just take the elevator up after the boss fight and you’ll find the Fractured Shrines entrance.

In the Fractured Shrines

Once you’re in the Fractured Shrines, continue through the level until you find a platform that at first appears to be a dead end. It’ll be raining here, which are first also doesn’t appear to be very important but if you look to the side of the cliff, you’ll see the rain crash on an invisible platform stemming from the cliff.

From here, follow the glowing path left behind by the rain. You’ll soon get the “Secret Area Discovered” message before coming upon a variety of traps and some tough enemies, so be prepared. You’ll need the Spider Rune in order to get to the next spot.

Finally, you’ll find yourself at a new “secret area” and will notice at the top of this landmass is three platforms that can be broken with the Ram Rune, but you can also just enter in from the side next to the portal.

When you are ready, breakthrough the platform and you’ll find yourself faced with a mini boss, which likely won’t serve as too much of a threat.

After you beat the boss, you’ll see a giant doorway open up behind you, enter it and follow the path through to the end.

Here is where you’ll meet Serenade. He’ll join you for the reminder of your run (assuming you keep him around, that is). You’ll need to deliver the blueprint to the Collector and pay 50 cells to unlock him permanently –the same as you would for any other blueprint in the game.

Serenade is a skill that will summon a flying sword. It’ll fly around attacking and marking enemies on its own, though you can use it as one of your primary weapons when the cooldown is up. It’ll temporarily replace one of your weapons, but don’t worry it’ll come back when the skill runs out –you can also cancel it earlier by pressing the corresponding skill button.

That’s all you need to know about how to find Serenade in Dead Cells Fatal Falls. Be sure to search for Twinfinite for more tips and information on the game.

Is Loop Hero Coming to Nintendo Switch? Answered
Valheim: How to Get Wishbone & What It Does
Cold War Zombies Full Power Explained: What It Does & How to Get It