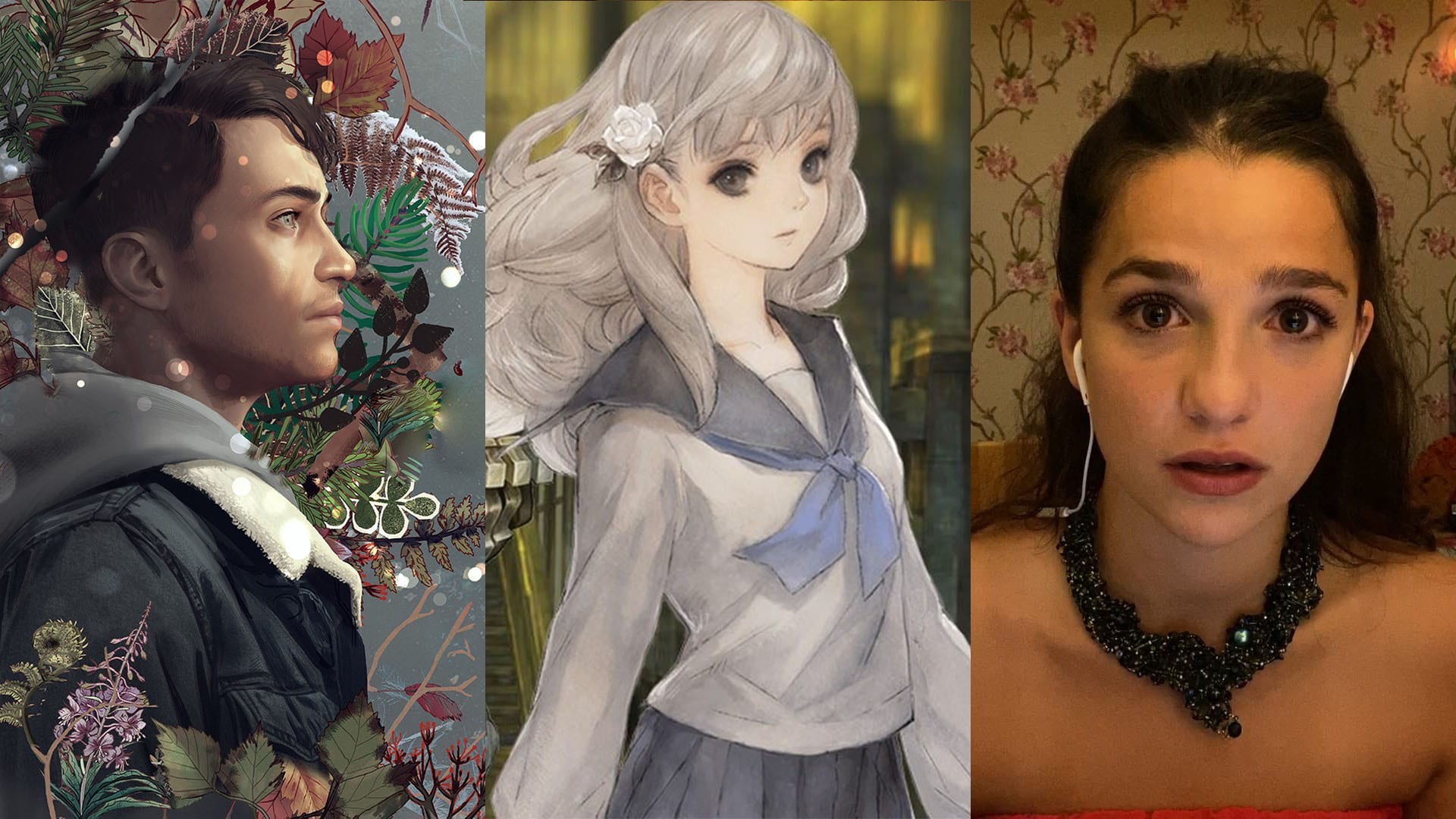 2020 was possibly the year in which good storytelling was needed the most to help us through months spent at home, and gaming certainly delivered. Part of Twinfinite’s Game of the Year awards, here are the Best Adventure Narrative & Visual Novel Games of 2020.

Voted on by our editors and staff, these were the narrative games that stood out the most in the past year.

News Editor Giuseppe Nelva: The Sakura Wars franchise has been absent from consoles for fifteen years, but Sega’s has finally brought it back, much to my delight.

It’s hard to describe the emotion I felt when Sega initially announced the game on stage at Sega Fes a few years ago. It was a simple teaser that didn’t show much at all, but it was enough to get a fan’s heart beating faster. I still remember writing the news with trembling hands and tears in my eyes like it was yesterday.

The return of the beloved franchise brings a new cast and new gameplay. While the action mechanics may not have satisfied everyone, the characters and story have all the charm and flair I remembered.

A charming mix of emotional romance, humor, and adventure, Sakura Wars showcased that Sega is certainly still capable to write great stories outside of the Yakuza and Valkyria Chronicles series, and I certainly hope that the house of Sonic will not let this franchise sleep any longer, perhaps unleashing its full potential by bringing back the turn-based tactical battles that are likely better suited for its narrative nature.

Regardless of gameplay style, Sakura Wars is a fantastic game if you want to get engrossed in top-notch character-based storytelling with all the Japanese flavor you would expect from one of the most beloved franchises in the genre.

Editor-in-Chief Ed McGlone: The Dark Pictures Anthology is now two entries long and we’re starting to get a feel for the kind of frights we can expect. While they may not reach the length and quality of Until Dawn, these bite sized stories like Little Hope have proven themselves capable of punching above their weight.

Little Hope sees players explore a setting themed around the infamous Salam Witch Trials. While stranded in the abandoned town of Little Hope, players will be haunted by visions of what appears to be the town’s dark past that seem to have a way of manifesting into the present day.

Like other Supermassive Games titles, your quick decision making will determine who makes it to the end of the story and who doesn’t.

While it’s not the greatest horror tale ever told, it’s entertaining enough and is especially fun when played with a group. That’s what I think Supermassive Games is going for in their Anthology series.

Corny, silly, and fun adventures filled with some cheap scares that are short enough where you and a few buddies can complete it in one go if you wanted to. Looking through Little Hope with that lens, it definitely succeeded.

Deputy Guides Editor Tom Hopkins: Setting a live-action game around a 20-something trying online dating during lockdown is a very 2020 idea. Even before the lockdown setting, it’s somewhat surprising that a rom-com video game has never seen the light of day, especially in the FMV format.

As Vinny, you choose between five potential dates and see if you form a connection with any of them (each of whom are played excellently) over the course of up to three themed Zoom meetings.

What could be cheesy and awkward is surprisingly sweet and enjoyable. It’s not the deepest story you’ll ever dive into, especially with one ‘run’ being no more than 90 minutes long, but the great writing and likable characters make it easy to get invested in.

A good rom-com leaves you feeling warm and happy as the credits roll, no matter how generic it is, and Five Dates has the same effect. Five Dates also has the added benefit of having five distinct paths to go down. Each prospective date has a different personality and will act in a realistic way to your responses, ensuring that whatever story you choose feels genuine.

Five Dates is a well written, engaging story told in an interesting way. Hopefully, we’ll see more games like it in the future. Also, Maya forever!

First Runner-Up: Tell Me Why

Guides Editor Chris Jecks: As a big fan of DONTNOD Interactive’s Life Is Strange series, I’m always excited whenever the developer branches out and delivers a new story-driven experience. Tell Me Why garnered a lot of attention when it was first announced due to its trans protagonist, Tyler who, along with his sister Alyson uncover deep, dark secrets about their childhood.

In typical DONTNOD fashion, the story has been lovingly crafted, filled with deep, emotional moments and plenty of twists and turns that’ll have you binging all three chapters back-to-back.

The story seamlessly shifts between the past and present, drip-feeding you answers to the twins’ mysterious past, before thrusting you into a full-blown investigation in the present day.

Add in branching storylines and the ability to develop or destroy Tyler’s relationships with the other various residents of Juneau, a city in Alaska, and you’ve got a game that has ample replay value.

There are a lot of games that also offer this, but few have made me want to replay them.

It’d be remiss of me not to mention Tell Me Why’s significance in trans representation in video games, specifically with how incredibly well DONTNOD has portrayed Tyler and the many challenges he’s faced both prior to and following his transition.

In particular, the discrimination he faces and the unintended reminders of his past life that he may not want to remember. Trans representation is still rare in the video games industry, and in those occasions where it is present, it’s seldom handled well.

Tell Me Why is a standout example of how trans representation should be done, and DONTNOD’s collaboration with GLAAD and input from other trans, nonbinary and gender non-conforming staff has helped ensure Tyler’s story remained sincere and authentic.

This, on its own makes Tell Me Why deserving of praise, but the fact it’s wrapped up in an equally stellar narrative with classic DONTNOD gameplay makes it a must-play for fans of the genre.

Tell Me Why was one of my unexpected favorite games of 2020. It’s proof DONTNOD has legs beyond its Life Is Strange series, and, honestly, it may even have the strength in character writing, world-building, and narrative to stand shoulder-to-shoulder with the Arcadia Bay-based series.

News Editor Giuseppe Nelva: We have waited a long time for 13 Sentinels: Aegis Rim. When it was announced, the the PS4 was still fairly young and the PS Vita was still a thing.

The western release took even longer after pretty much disappearing for years, making some lose hope that it would ever come. Yet, it did come, and it was absolutely worth the wait.

Mixing absolutely top-notch storytelling worthy of the best visual novels (I certainly could see some Muv-Luv inspiration here) with engaging battle gameplay that perhaps was the biggest surprise, 13 Sentinels: Aegis Rim shines also thanks to the beautiful art that makes Vanillaware games unmistakable.

It managed to wake up even mainstream gaming press that usually sleeps soundly on this kind of game, which is a rather titanic deed for a title that couldn’t be more niche in basically everything it does. If there was one game in 2020 (and 2019) that embraces its Japanese nature and sings it from the top of the mountains for everyone to hear, it’s this one.

Director George Kamitani accompanied the western launch with a message expressing his pride for the game, and proud he should be, because 13 Sentinels: Aegis Rim manages to be bigger than the sum of its part despite the fact that each of these parts is awesome in its own right.

Vanillaware proved once more that craft and art can and will absolutely outweigh technology and resources when you pour all of your love and passion into telling your story, without rushing or making compromises.

13 Sentinels also proved that Japanese developers don’t need to go out of their way to pursue makeshift ideas of what western audiences may want to be successful. It couldn’t be more unapologetically Japanese, and that’s certainly part of its charm.