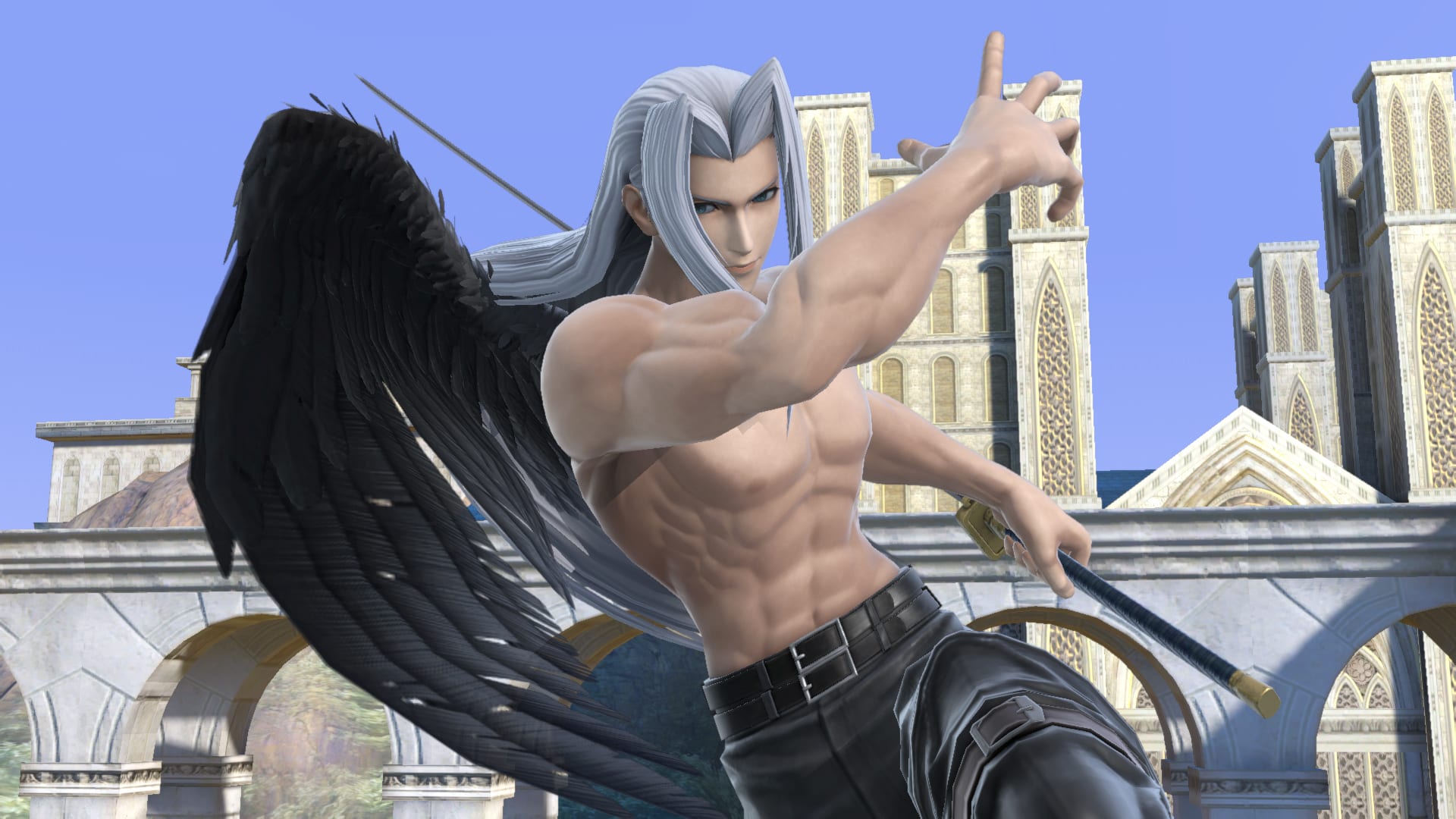 Nintendo is slowly but surely filling up the Super Smash Bros. Ultimate roster with video game characters from all over. The second round of the Fighters Pass kicked off earlier this year with Min Min from ARMS, and then we got Minecraft Steve, and now we have Sephiroth.

The devilishly handsome villain from Final Fantasy VII joins the cast of characters with a moveset that is wildly unique but also doesn’t stray far from the typical Smash Bros. fighter.

Both Min Min and Steve came with a certain type of moveset that one could call a sort of “gimmick.” Min Min had her pair of long, extendable arms that could be switched out with a button press and Steve brought the pixelated world of Minecraft with him, allowing him to craft swords and build blocks.

These DLC characters recently have had some wild movesets and mechanics, but Sephiroth is a bit different. He doesn’t have a “gimmick” per se, as he fights with pretty normal moves. With that being said, he still has some tricks up his sleeve that we’ve never seen before in Super Smash Bros., making this fighter a very enjoyable character to play as.

One of his standout moves that I love using is the neutral special, which is called Flare. But this move can transform into two other moves, depending on how long you hold the special for.

The first one is a quick burst of flame that can deal a good chunk of damage, and then the second one is a much faster orb that explodes on impact and has much farther reach, and that’s called Megaflare. And the final one, Gigaflare, takes a few seconds to charge up, but if you can successfully hit someone, it does massive damage and is very capable of killing at low percentages.

It’s the attack I get the most enjoyment from using, as it is so deadly in a kind of OP sort of way. I’m just hoping it doesn’t get nerfed!

As for his down special, it’s a counter that works exactly as other counter moves from characters like Lucario or Marth.

But his side special, Shadow Flare, is more unique. It can be charged like the neutral special, and if it hits someone, small orbs of darkness will begin to surround them and will follow them for a few seconds. You can stack this effect until 5-6 orbs are surrounding your opponent. After a short period of time, all of the orbs will hit the player at the same time and can cause a ton of damage if not blocked with a shield or a dodge.

Sephiroth’s recovery move, otherwise known as the up special Blade Dash, is also very interesting, in that it can change into a completely different devastating move.

Hold the special and it becomes Octaslash that can be aimed in any direction. It can be used to get back on the stage and can deal tons of damage very quickly if you can get all eight hits on a player. I would be careful overusing it though, as it leaves you completely open to attack once you finish the combo –it’s not the move to spam, that’s for sure.

All in all, Sephiroth is yet another interesting fighter to be added into Super Smash Bros. Ultimate. He’s easy to use but challenging to master. He has great recovery, can deal massive damage in a few short seconds, and although he’s powerful, he doesn’t feel as heavy as you would think.

Sephiroth isn’t the fastest character out there –his moves are slow and strong, and it’s easy for other players to get the hit on him after he performs a heavy attack–, but he’s a great fighter that’s not tied down to an uninteresting mechanic. He fits right in with the others and now we have even more Final Fantasy VII music, and that’s an incredible thing. Now, excuse me while I listen to One-Winged Angel for the umpteenth time.

If you’ve already purchased Sephiroth, you can unlock him early by facing off against him in a stamina battle via a limited-time mode.