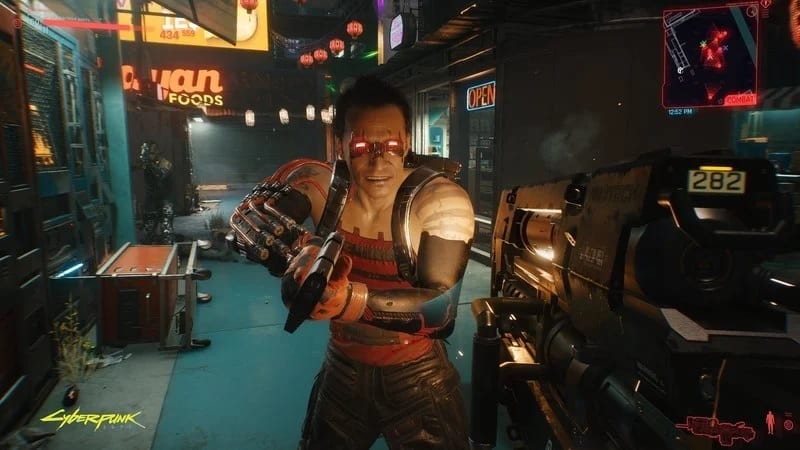 Cyberpunk 2077 features plenty of gigs that V can do in order to improve their street cred and get a little bit of extra cash in their pockets. Greed Never Pays is one of those gigs, taking place in Westbrook. Here is everything you need to know about the Greed Never Pays gig in Cyberpunk 2077.

To activate the Greed Never Pays gig in Cyberpunk 2077, head over to the yellow exclamation point highlighted on the map below. To be exact, it’s on the west side of Westbrook, located near the bridge.

Once you arrive, you’ll get a call from Wakako Okada letting you know that she needs you to get your hands on a lock breaker. After you get off the phone with her, follow the highlighted route until you reach Leah Gladen’s Apartment.

When you get inside Leah’s apartment, head to the right and you’ll see a vending machine. Scanning it shows that there is a secret room behind it.

To move the vending machine, head over to the left and back into the room you initially came into via the main door. Straight ahead you’ll find a red button just underneath the table on the wall.

Pressing the red button opens up the secret room, so head on back over to the vending machine. Start up the computer and click through her emails until you get to the one titled “Skeleton Key.”

Once you open that email, a new quest objective tells you to head over to a braindance club nearby called Wired Head. Inside, you’ll find the lock breaker in the backroom to the right.

Wired Head is full to the brim with hostile enemies that are pretty much impossible to get around outside of a good old fashioned fight. Once you take everyone out, you’ll be able to grab the lock breaker and complete the gig.

That is everything you need to know about the Greed Never Pays gig in Cyberpunk 2077. For more help with other gigs, side missions, or anything else in Night City, be sure to check out our ever-growing guide wiki.