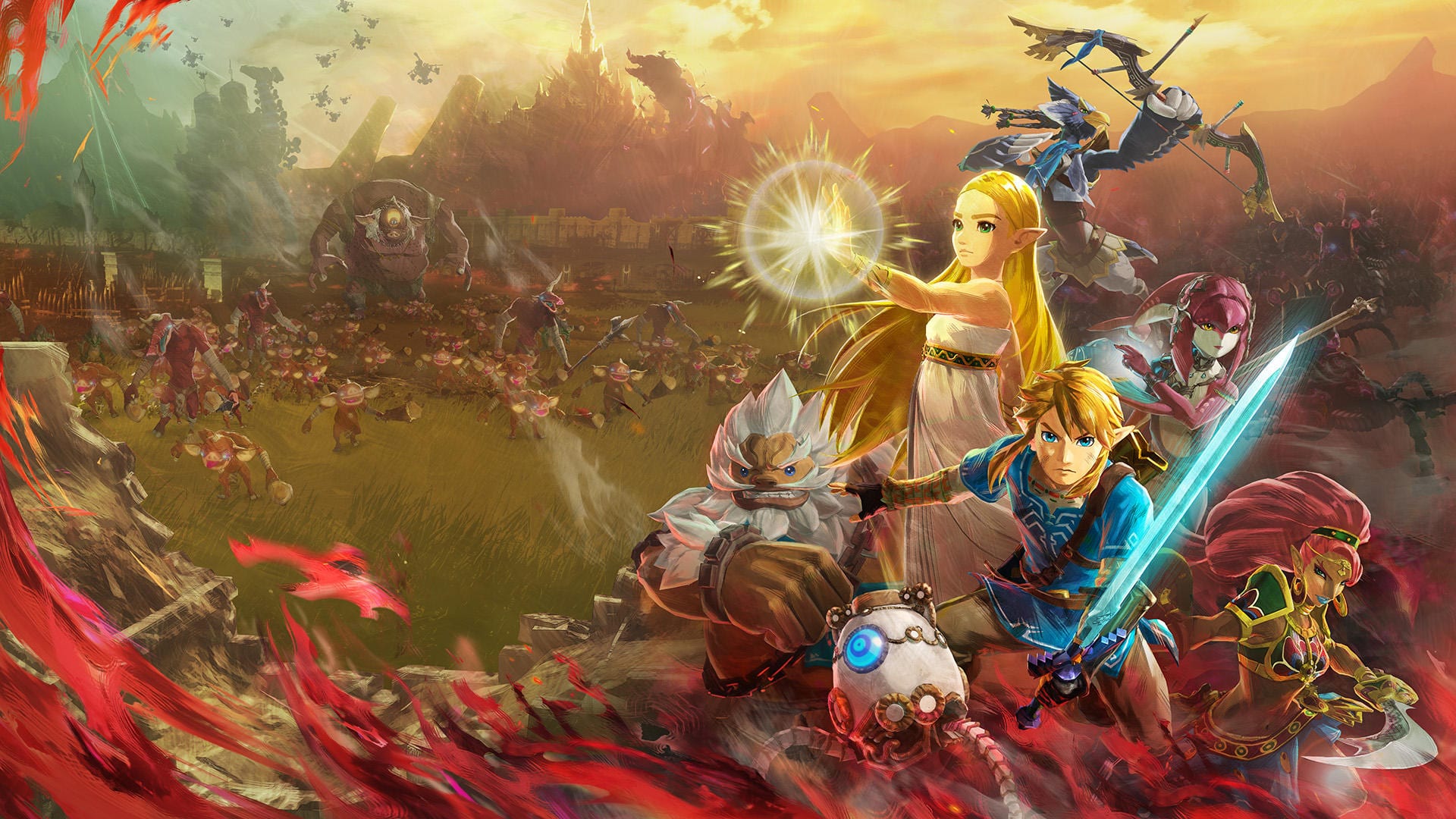 After being thoroughly enthralled by Breath of the Wild when it first released for the Switch, I was eager for more Zelda content on Nintendo’s new hybrid console. The Link’s Awakening remake was decent enough, but not quite what I was looking for. The Wii U Hyrule Warriors game was even more of a far cry from what I wanted, and while I enjoyed my time with it, I quickly lost interest. So when Hyrule Warriors: Age of Calamity got announced, I was skeptical.

More musou-style gameplay where you’d have to grind levels and money in between chunks of missions? It didn’t sound all that promising. But in sinking tens of hours into Age of Calamity, I finally figure out what I was looking for: more Breath of the Wild content. Anything that would allow me to spend more time in this rich world.

Hyrule Warriors: Age of Calamity serves as a prequel to the excellent Breath of the Wild. It follows the story of Zelda and Link before their powers had awakened, and also shows us how the four champions came to become pilots of the powerful Divine Beasts.

New characters and villains get introduced, and players will also be accompanied by a new tiny Guardian that takes on a central role in the main mystery of the game.

To be perfectly frank, the story in Age of Calamity isn’t particularly engaging. I’d felt much the same way about the story in Breath of the Wild as well, but what Nintendo’s done so well with these games is how its characters are presented.

The four champions only made brief appearances in Breath of the Wild, followed by a more extensive look into their lives with the Champions’ Ballad DLC, but Age of Calamity is completely centered around them. That’s the best part of this game.

Revali, who continues to be my favorite champion, is unbearably smug and insufferable. But he’s complemented well by the easygoing Daruk, who’s never afraid to knock him down a peg whenever he becomes too much of a diva. Urbosa continues to play the role of the mature mentor to Zelda, while Mipha remains shy and soft-spoken, forever trying to hide her not-so-secret crush on Link, who can’t stop shoving food in his mouth.

More characters join the main cast, including Impa, and even possibly my favorite NPC from Breath of the Wild: the maraca-shaking Hestu himself. The biggest strength of Age of Calamity, then, is the sheer liveliness of the main cast.

Whereas Breath of the Wild thrived in the underlying loneliness of Link’s journey to save Zelda in Hyrule Castle, Age of Calamity feels more like a traditional JRPG with characters playing off each other’s quirks and personalities.

It’s fun, it’s cute, and while the story never quite manages to impress me in any meaningful way, I wanted to keep going.

Story elements aside, Hyrule Warriors: Age of Calamity serves up its gameplay mechanics and systems in droves. Like most musou-style games these days, you don’t have to worry about there being a dearth in content with this one.

There’s so much to do outside of the main story, so many shops to unlock, resources to farm, and characters and weapons to level up, that it’s easy to feel overwhelmed in the first few hours.

The basic combat itself is pretty much what you would expect: hit Y for a light attack, hit X for a strong attack. When a little bar fills up in the top left corner, hit A for a special AoE attack. Standard musou-style stuff, right? Yes, until the game starts hitting you with the extra bells and whistles to make this feel more like Breath of the Wild.

Some familiar mechanics make a return here, including the ability to dodge an attack at just the right moment so you can execute a flurry rush to break an enemy’s shield, and allow you to follow-up with a powerful attack. All characters also have access to a paraglider and Sheikah Slate powers, which means you can use Stasis, Cryonis, Bombs, and Magnesis in combat.

All of these extra abilities are meant to serve the same purpose: breaking the enemy’s shield so you can use a weak point smash to deal an insane amount of damage. Throughout my time with Age of Calamity, I found that I was way less reliant on just spamming the same combos over and over like I would with other musou-style games, and was instead trying to be a little more tactical by dodging attacks and waiting for openings so I could hit them with that weak point smash.

You’ll still be spamming your way through hordes of moblins and other weaker enemies of course, but the captains and bosses require you to be a little more careful, which is a really nice change of pace. I don’t think I’ve ever enjoyed the combat in a musou-style game as much as I have Age of Calamity’s.

It certainly helps that all of the characters feel extremely unique and distinct as well. Link plays like a regular swordsman, making him the perfect beginner character to start with. But the rest of the cast feels very different.

Zelda uses her Sheikah Slate to fight, and her attacks are often ranged and varied. She can also activate bombs and ice blocks with the right combos to deal a lot of AoE damage. Revali is quick on his feet and his combos often end with him flying up in the air to unleash a volley of arrows at his enemies, while Urbosa can store lightning in her sword and unleash it in her strong attacks.

Hestu… well, Hestu does his own thing with the maracas and can summon Koroks to aid him in battle. If you loved the “YAHAHA!” sound effects from Breath of the Wild, you’ll love playing as Hestu. I love it, and I can’t get enough of it.

Aside from getting to know the champions themselves, you’ll also finally have the chance to pilot the Divine Beasts. Some story missions task you with eliminating large amounts of enemies or reaching a target area while piloting a Divine Beast, and these can be played with motion controls as well.

These missions are… okay. They serve as a nice break from the usual hack-and-slash affairs but moving the Beasts themselves always feels clunky, which makes sense considering you’re in a huge ass machine, but it’s just not as fun as zipping around a map, cutting up enemies like a badass.

Outside of the story missions, you’ll have challenge missions to do, which are great for leveling up your characters and getting money and materials. These are shorter missions with special conditions like time limits, using specific weapon types, killing a certain number of enemies, or clearing a mission without getting hit once.

Resources are gained from mission completion or just general exploration in a level, and they can be turned in under the Quests tab of your menu. These quests reward you with longer combo strings for individual characters, new shops and services, and cosmetic items for Link.

Because most of your actual character progression is tied to quest completion, that’s a strong incentive to keep buying and farming for materials to finish up those quests.

The quests are also divided up by region, much like in Breath of the Wild, and completing enough quests in a specific region will level it up, rewarding you with an even greater bounty of materials to put towards other quests. It’s an extremely compelling loop that keeps me coming back.

It’s incredibly satisfying to see so many orange icons on my map turn blue as I complete more quests, get more materials, and strengthen my characters even further.

There are recipes to collect, which let you cook meals for experience boosts and other bonuses for your missions, along with a fairly basic weapon fusion system, which lets you strengthen your favorite weapons and add some new perks to them as well.

Hyrule Warriors: Age of Calamity is a lot to take in. There are so many systems in play here, but somehow they all come together to form a solid, cohesive experience that makes this game so damn hard to put down. Throw in a cast of extremely likeable characters, and set it in the rich world of Breath of the Wild, and you get one of the best musou-style games that Koei Tecmo and Omega Force have ever put out. If you just want more Breath of the Wild content, don’t pass up on this one.